How the 99 percent was born

The Great Recession destroyed the right's myth of a "liberal elite," and forced the middle class to band together 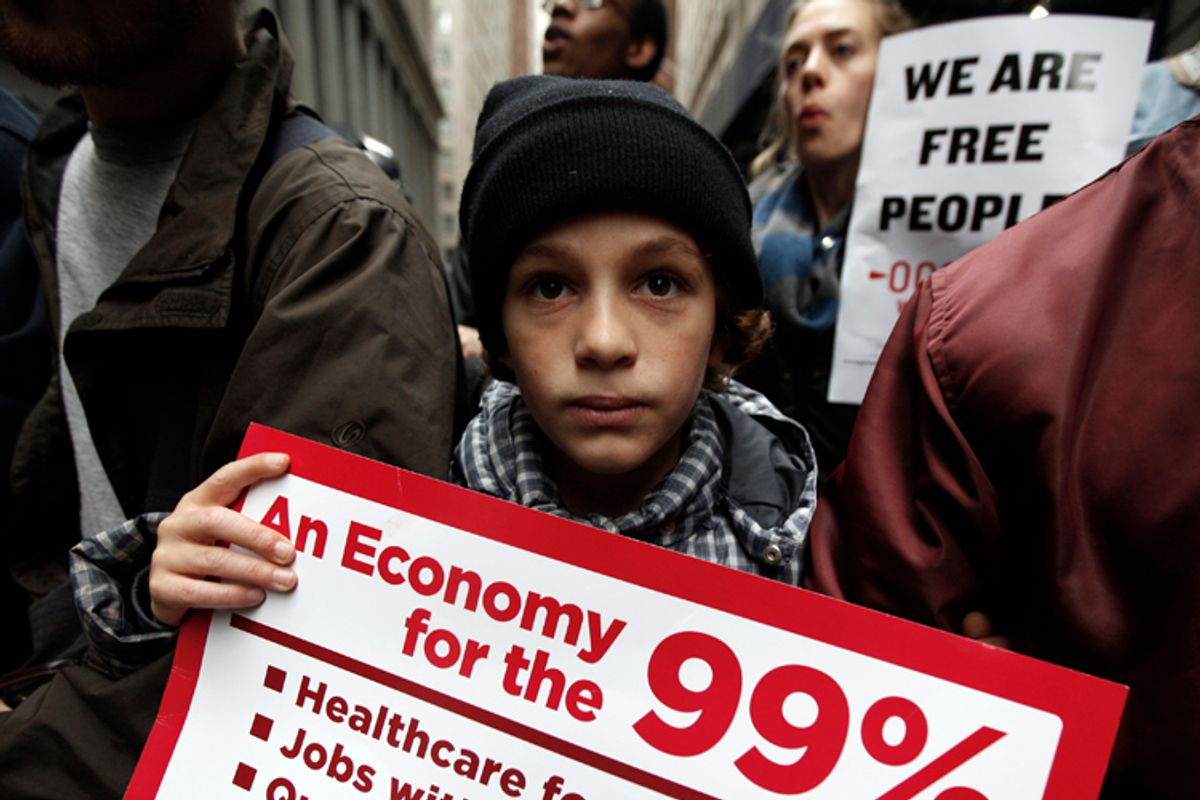 This originally appeared on TomDispatch. It is a joint TomDispatch/Nation article and appears in print at the Nation magazine.

The “other men” (and of course women) in the current American class alignment are those in the top 1 percent of the wealth distribution -- the bankers, hedge-fund managers, and CEOs targeted by the Occupy Wall Street movement. They have been around for a long time in one form or another, but they only began to emerge as a distinct and visible group, informally called the “super-rich,” in recent years.

Extravagant levels of consumption helped draw attention to them: private jets, multiple 50,000 square-foot mansions, $25,000 chocolate desserts embellished with gold dust. But as long as the middle class could still muster the credit for college tuition and occasional home improvements, it seemed churlish to complain. Then came the financial crash of 2007-2008, followed by the Great Recession, and the 1 percent to whom we had entrusted our pensions, our economy, and our political system stood revealed as a band of feckless, greedy narcissists, and possibly sociopaths.

Still, until a few months ago, the 99 percent was hardly a group capable of (as Thompson says) articulating “the identity of their interests.” It contained, and still contains, most “ordinary” rich people, along with middle-class professionals, factory workers, truck drivers and miners, as well as the much poorer people who clean the houses, manicure the fingernails and maintain the lawns of the affluent.

It was divided not only by these class differences, but most visibly by race and ethnicity -- a division that has actually deepened since 2008. African-Americans and Latinos of all income levels disproportionately lost their homes to foreclosure in 2007 and 2008, and then disproportionately lost their jobs in the wave of layoffs that followed.  On the eve of the Occupy movement, the black middle class had been devastated. In fact, the only political movements to have come out of the 99 percent before Occupy emerged were the Tea Party movement and, on the other side of the political spectrum, the resistance to restrictions on collective bargaining in Wisconsin.

But Occupy could not have happened if large swaths of the 99 percent had not begun to discover some common interests, or at least to put aside some of the divisions among themselves. For decades, the most stridently promoted division within the 99 percent was the one between what the right calls the “liberal elite” -- composed of academics, journalists, media figures, etc. -- and pretty much everyone else.

As Harper’s Magazine columnist Tom Frank has brilliantly explained, the right earned its spurious claim to populism by targeting that “liberal elite,” which supposedly favors reckless government spending that requires oppressive levels of taxes, supports “redistributive” social policies and programs that reduce opportunity for the white middle class, creates ever more regulations (to, for instance, protect the environment) that reduce jobs for the working class, and promotes kinky countercultural innovations like gay marriage. The liberal elite, insisted conservative intellectuals, looked down on “ordinary” middle- and working-class Americans, finding them tasteless and politically incorrect. The “elite” was the enemy, while the super-rich were just like everyone else, only more “focused” and perhaps a bit better connected.

Of course, the “liberal elite” never made any sociological sense. Not all academics or media figures are liberal (Newt Gingrich, George Will, Rupert Murdoch). Many well-educated middle managers and highly trained engineers may favor latte over Red Bull, but they were never targets of the right. And how could trial lawyers be members of the nefarious elite, while their spouses in corporate law firms were not?

A Greased Chute, Not a Safety Net

“Liberal elite” was always a political category masquerading as a sociological one. What gave the idea of a liberal elite some traction, though, at least for a while, was that the great majority of us have never knowingly encountered a member of the actual elite, the 1 percent who are, for the most part, sealed off in their own bubble of private planes, gated communities, and walled estates.

The authority figures most people are likely to encounter in their daily lives are teachers, doctors, social workers and professors. These groups (along with middle managers and other white-collar corporate employees) occupy a much lower position in the class hierarchy. They made up what we described in a 1976 essay as the “professional managerial class.” As we wrote at the time, on the basis of our experience of the radical movements of the 1960s and 1970s, there have been real, longstanding resentments between the working-class and middle-class professionals. These resentments, which the populist right cleverly deflected toward “liberals,” contributed significantly to that previous era of rebellion’s failure to build a lasting progressive movement.

As it happened, the idea of the “liberal elite” could not survive the depredations of the 1 percent in the late 2000s. For one thing, it was summarily eclipsed by the discovery of the actual Wall Street-based elite and their crimes. Compared to them, professionals and managers, no matter how annoying, were pikers. The doctor or school principal might be overbearing, the professor and the social worker might be condescending, but only the 1 percent took your house away.

There was, as well, another inescapable problem embedded in the right-wing populist strategy: Even by 2000, and certainly by 2010, the class of people who might qualify as part of the “liberal elite” was in increasingly bad repair. Public-sector budget cuts and corporate-inspired reorganizations were decimating the ranks of decently paid academics, who were being replaced by adjunct professors working on bare subsistence incomes. Media firms were shrinking their newsrooms and editorial budgets. Law firms had started outsourcing their more routine tasks to India. Hospitals beamed X-rays to cheap foreign radiologists. Funding had dried up for nonprofit ventures in the arts and public service. Hence the iconic figure of the Occupy movement: the college graduate with tens of thousands of dollars in student loan debts and a job paying about $10 a hour, or no job at all.

These trends were in place even before the financial crash hit, but it took the crash and its grim economic aftermath to awaken the 99 percent to a widespread awareness of shared danger. In 2008, “Joe the Plumber’s” intention to earn a quarter-million dollars a year still had some faint sense of plausibility. A couple of years into the recession, however, sudden downward mobility had become the mainstream American experience, and even some of the most reliably neoliberal media pundits were beginning to announce that something had gone awry with the American dream.

Once-affluent people lost their nest eggs as housing prices dropped off cliffs. Laid-off middle-aged managers and professionals were staggered to find that their age made them repulsive to potential employers. Medical debts plunged middle-class households into bankruptcy. The old conservative dictum -- that it was unwise to criticize (or tax) the rich because you might yourself be one of them someday -- gave way to a new realization that the class you were most likely to migrate into wasn’t the rich, but the poor.

And here was another thing many in the middle class were discovering: The downward plunge into poverty could occur with dizzying speed. One reason the concept of an economic 99 percent first took root in America rather than, say, Ireland or Spain is that Americans are particularly vulnerable to economic dislocation. We have little in the way of a welfare state to stop a family or an individual in free-fall. Unemployment benefits do not last more than six months or a year, though in a recession they are sometimes extended by Congress. At present, even with such an extension, they reach only about half the jobless. Welfare was all but abolished 15 years ago, and health insurance has traditionally been linked to employment.

In fact, once an American starts to slip downward, a variety of forces kick in to help accelerate the slide. An estimated 60 percent of American firms now check applicants' credit ratings, and discrimination against the unemployed is widespread enough to have begun to warrant Congressional concern. Even bankruptcy is a prohibitively expensive, often crushingly difficult status to achieve. Failure to pay government-imposed fines or fees can even lead, through a concatenation of unlucky breaks, to an arrest warrant or a criminal record. Where other once-wealthy nations have a safety net, America offers a greased chute, leading down to destitution with alarming speed.

Making Sense of the 99 percent

The Occupation encampments that enlivened approximately 1,400 cities this fall provided a vivid template for the 99 percent’s growing sense of unity. Here were thousands of people -- we may never know the exact numbers -- from all walks of life, living outdoors in the streets and parks, very much as the poorest of the poor have always lived: without electricity, heat, water, or toilets. In the process, they managed to create self-governing communities.

General assembly meetings brought together an unprecedented mix of recent college graduates, young professionals, elderly people, laid-off blue-collar workers and plenty of the chronically homeless for what were, for the most part, constructive and civil exchanges. What started as a diffuse protest against economic injustice became a vast experiment in class building. The 99 percent, which might have seemed to be a purely aspirational category just a few months ago, began to will itself into existence.

Can the unity cultivated in the encampments survive as the Occupy movement evolves into a more decentralized phase?  All sorts of class, racial, and cultural divisions persist within that 99 percent, including distrust between members of the former “liberal elite” and those less privileged. It would be surprising if they didn’t. The life experience of a young lawyer or a social worker is very different from that of a blue-collar worker whose work may rarely allow for biological necessities like meal or bathroom breaks. Drum circles, consensus decision-making, and masks remain exotic to at least the 90 percent. “Middle class” prejudice against the homeless, fanned by decades of right-wing demonization of the poor, retains much of its grip.

Sometimes these differences led to conflict in Occupy encampments -- for example, over the role of the chronically homeless in Portland or the use of marijuana in Los Angeles -- but amazingly, despite all the official warnings about health and safety threats, there was no “Altamont moment”: no major fires and hardly any violence.  In fact, the encampments engendered almost unthinkable convergences: people from comfortable backgrounds learning about street survival from the homeless, a distinguished professor of political science discussing horizontal versus vertical decision-making with a postal worker, military men in dress uniforms showing up to defend the occupiers from the police.

Class happens, as Thompson said, but it happens most decisively when people are prepared to nourish and build it. If the “99 percent” is to become more than a stylish meme, if it’s to become a force to change the world, eventually we will undoubtedly have to confront some of the class and racial divisions that lie within it. But we need to do so patiently, respectfully, and always with an eye to the next big action -- the next march, or building occupation, or foreclosure fight, as the situation demands.

John Ehrenreich is the author of Third Wave Capitalism: How Money, Politics, and the Pursuit of Self-Interest have Imperiled the American Dream (Cornell University Press)