Is gravity catching up with Newt?

His last 48 hours: Ominous polls, new doubts about strategy, and a damning rebuke from a top right-wing organ 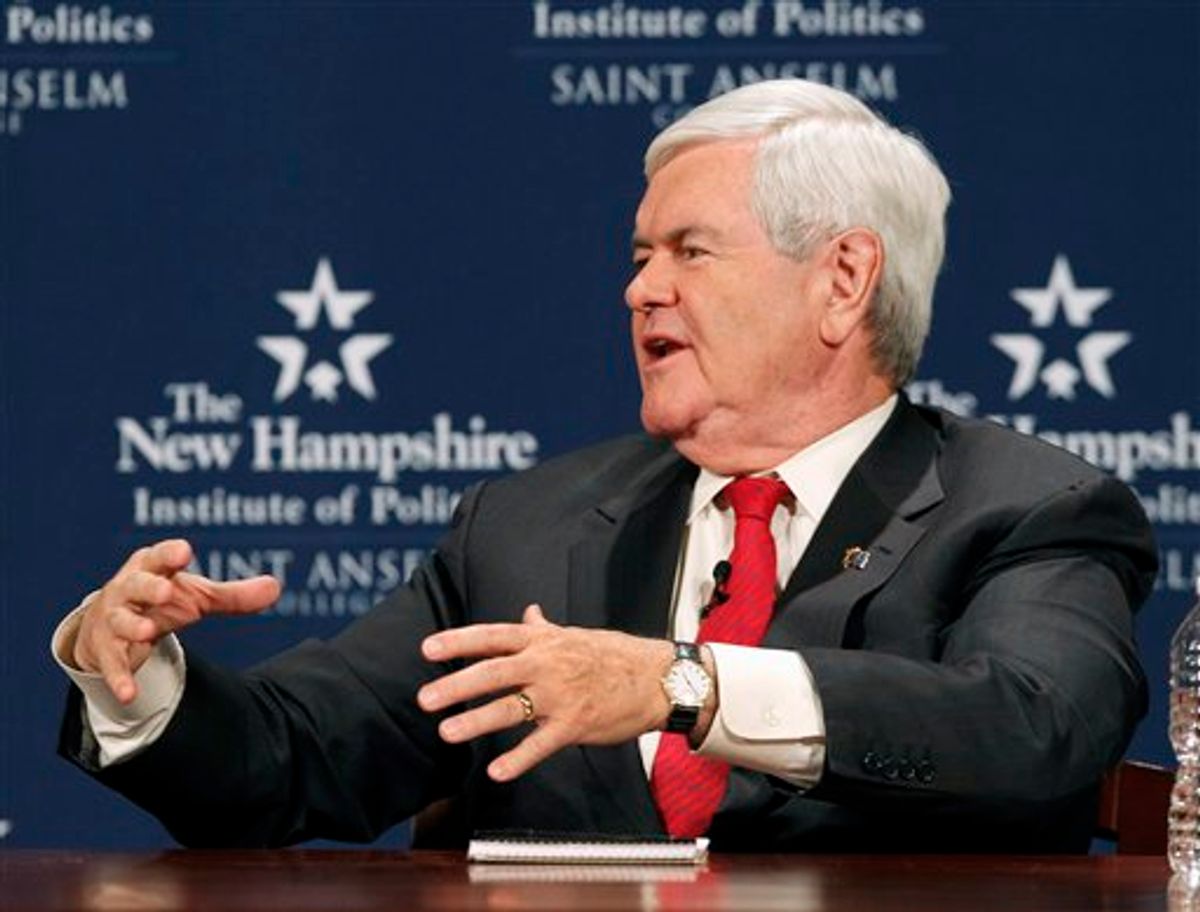 FILE - In this Dec. 12, 2011 file photo, Republican presidential candidate former House Speaker Newt Gingrich gestures during debate in Manchester, N.H. Gingrich is pledging to stay relentlessly positive in his quest for the White House. Except when he's not. (AP Photo/Elise Amendola, File) (AP)
--

National Review went public last night with a blunt plea to Republican primary voters to stay away from Newt Gingrich, who in the venerable conservative outlet's view "appears unable to transform, or even govern, himself."

The editorial argues that Gingrich is still defined by the "character flaws" ("his impulsiveness, his grandiosity, his weakness for half-baked [and not especially conservative] ideas") that marred his tenure as House speaker in the 1990s. "Again and again," it reads, "he combined incendiary rhetoric with irresolute action, bringing Republicans all the political costs of a hardline position without actually taking one. Again and again he put his own interests above those of the causes he championed in public."

The conclusion: "He should be an adviser to the Republican party, but not its head."

In taking aim at Gingrich (while also declaring Mitt Romney, Jon Huntsman and Rick Santorum all worthy of Republicans' consideration), National Review is joining a chorus of influential conservative voices that has spent the past few weeks challenging the former House speaker's character, ideology, electability and basic fitness for the White House. But NR's blast is particularly significant because of the timing: It's hitting just as evidence is emerging that the intraparty "Stop Gingrich!" push might be working.

The first warning sign came on Tuesday when a PPP poll in Iowa found Gingrich losing 5 points from the previous week and slipping into a dead heat with Ron Paul for first place. The survey also showed Gingrich's unfavorable rating among Republicans in the lead-off caucus state climbing by 9 points in that time, to 40 percent. While other recent Iowa surveys have given Gingrich a comfortable lead, often with over 30 percent of the vote, PPP's numbers represent the freshest independent data, suggesting at least the possibility that Gingrich's support peaked sometime in the last week and has begun receding. (Politico reported on Wednesday that internal polls from the Romney and Rick Perry campaigns also show Gingrich faltering in Iowa, although those claims can be taken with a grain of salt, since neither of those campaigns spoke on the record or provided specific numbers.)

That possibility was bolstered on Wednesday by the release of a new national poll from Gallup, which showed a 6-point decline in Gingrich's support over the past week, reducing what had been a 14-point lead over Romney (37 to 23 percent) to 9 (31 to 22). And Wednesday night brought more data from New Hampshire, long a Romney bastion but a state where Gingrich has been gaining steam lately. But the poll from Suffolk University has Romney ahead by 18 points, 38 to 20 percent, with Huntsman lurking behind Romney at 13.

To be fair, there was some good polling news mixed in for Gingrich, most notably an NBC News/Wall Street Journal national poll in which he crushed Romney 40-23 percent -- the best score for a GOP candidate in any NBC/WSJ poll this year. But maybe this is an outlier. Or maybe one or more of the PPP, Gallup and Suffolk polls are. The problem for Gingrich is that the combination of all of the attacks from Republican opinion-shapers and three potentially problematic polls encourages a "Has Gingrich peaked?" media narrative -- one that NR's strike only feeds.

This sets up a pivotal next few days for Gingrich in Iowa, where Republicans will meet for their final scheduled pre-caucus debate on Thursday night. Gingrich's path to the nomination depends on winning Iowa (in a way that the media actually interprets as a victory), building momentum and marginalizing the other candidates who are vying to be the consensus non-Romney candidate. Then he could angle for a stronger-than-expected showing in New Hampshire and move on to friendlier turf in South Carolina and Florida. A three-for-four -- or even four-for-four -- January wouldn't be out of the question for Gingrich.

But Politico's Jonathan Martin reports that there is now a real sense among Iowa Republicans that Gingrich is at risk of squandering his advantage in the state, where the airwaves are now blanketed with tough anti-Newt ads funded by a Romney-aligned Super PAC. Gingrich, Martin wrote, is handling the Romney assault -- along with widely circulated anti-Newt videos produced by Ron Paul's campaign -- with "a mix of nonchalance and high-road confidence," downplaying the importance of ads and saying he'll tour the state on bus at the end of the month:

Gingrich’s response suggests a lack of urgency: on Wednesday he held a wonky seminar on brain science in this liberal college town. He had plans to return to Washington for a book-signing after Thursday’s debate in Sioux City, without scheduling any public events in the conservative-heavy northwest corner of the state.

Gingrich’s return from the political grave has been premised on disregarding the practice of politics as usual, and he now seems to be betting that he can bypass the traditional, retail-focused path to victory in Iowa and still win. Asked if he was endangering his Iowa prospects, Gingrich acknowledged he was taking intense fire but said he’d ramp up his effort before January 3rd.

If there's good news for Gingrich, it's that even if his numbers are ebbing, there's no evidence yet that Romney is picking up the slack. In the PPP poll in Iowa and in the Gallup national poll, Romney's numbers remained the same from last week to this week, even as Gingrich's declined. And while NR and other conservative voices are urging Republicans to warm up to Romney, other important voices on the right -- most notably Rush Limbaugh -- still aren't.

The million-dollar question in the GOP race remains: Just how desperate are Republican voters to deny Romney the nomination? If that feeling is strong, these past few days may end up being a bump in the road for Gingrich, especially if he can bounce back with a strong debate showing Thursday night. Otherwise, we may be nearing the point at which the "Stop Newt!" calls grow loud enough to finally move the holdouts Romney's way.