Where can "American Horror Story" go from here? 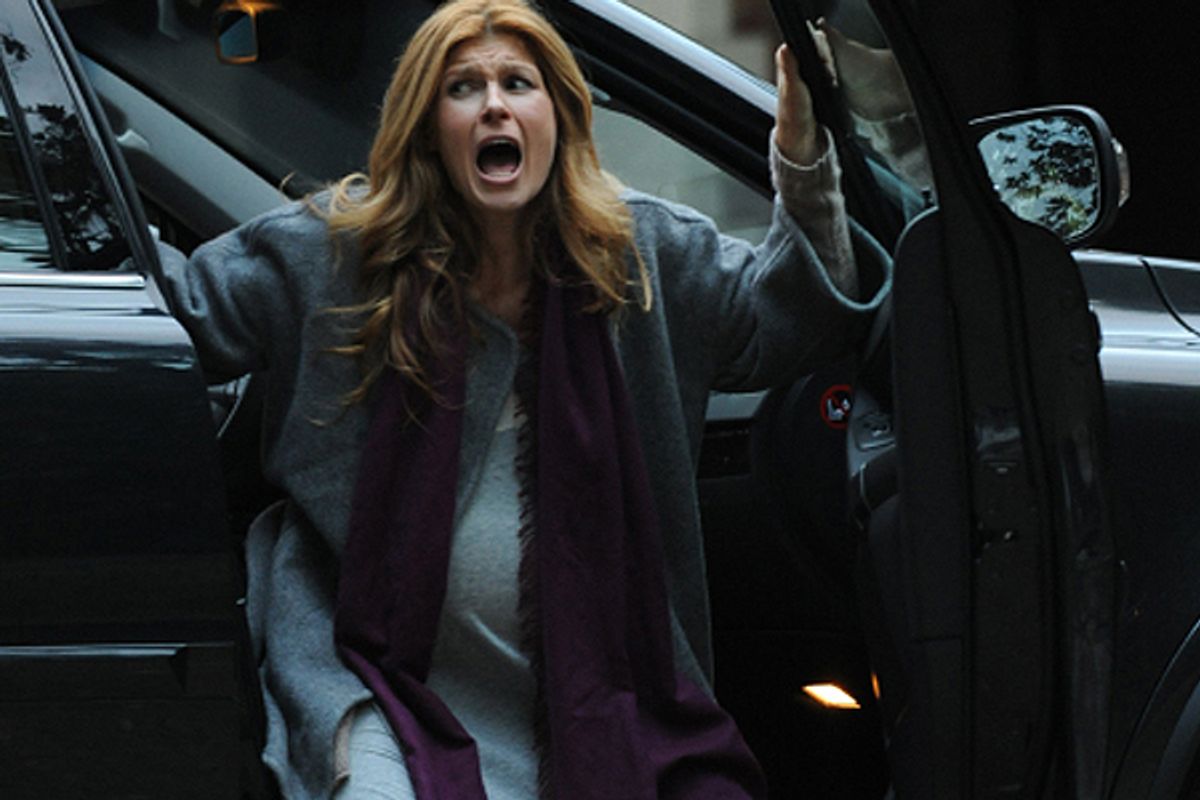 The following article contains spoilers for "American Horror Story" season one, episode 11, "Birth." Read at your own risk.

"Just because we're dead doesn't mean we don't have wants ... desires," said Tate, the pouty, bratty, forever-teenage rubber-suit-wearing, mom-of-the-house raping, suicide pact-making ... sorry, I feel like there should be about 12 more adjectives in there, because the ghostly Tate, like most of the characters on FX's aggressively lurid "American Horror Story," requires them. But let's stay focused on Tate's statement, because it's key. Yes, of course! He and the other ghosts have wants ... desires. And one of the many amazing things about the show is how, over the past few episodes, it has subtly moved the ghosts to the center of the narrative, to the point where the ever-dwindling number of living characters have started to seem like the supporting cast on a show that they were ostensibly the stars of. (Of course, now that they're all dropping like flies -- even money on Constance to bite the dust by the end of season two -- they get to be at the center of the story again.)

I'll spare you a detailed recap because if you didn't see the episode, you shouldn't be reading this article in the first place -- and besides, appreciation and speculation is more fun. As written by Tim Minear and directed by Alfonso Gomez-Rejon, it was perhaps the show's spookiest episode to date, campy and trippy (check out all those dissolves!) yet straightforwardly horrific, in the art house/grindhouse vein of a 1970s Ken Russell or Dario Argento picture.

First, the appreciations: Chad's insouciant "You gotta love this house!" was a trailer-made laugh line because it said what many of us were thinking. I do indeed love The Murder House, which as far as I'm concerned has already earned a spot on the list of great cinematic nightmare real estate, along with the Bates Motel in "Psycho," the Dakota in "Rosemary's Baby," the academy in "Suspiria," the starship Nostromo in "Alien" and the hospital in Lars von Trier's original Danish miniseries "The Kingdom" (which "AHS" is resembling more and more with each passing week). It's a dream space, even more so than the rest of the locations on this batshit-crazy series. Once you settle into the show's super-bitchy Grand Guignol groove, you get used to the fact that pretty much anything can happen, and start to look forward to the latest outrage in much the same way that you might have looked forward to the less ghastly twists that used to fill out old-fashioned weekday soap operas, the kind that the broadcast networks don't make anymore. (CBS called "Dallas" a nighttime soap back in the day, but it was a "Little House on the Prairie" romp through sun-dappled meadows compared to this.)

What else was there to like? Oh, come on, what wasn't awesome? I loved the torchlit flashback to the Roanoake colony, where supposedly 117 dead souls tormented the living until they were dispersed by a magic word, and I loved how Violet tried it on Chad and it didn't work. (I was reminded of Barlow the vampire's great line in Stephen King's "Salem's Lot": "Give me a bite ... I love garlic.") We got some explanations (via the medium) as to what in the Sam Hill is going on up in that house; apparently it's a conduit to the dark beyond, and it's spreading evil and misery out into our world via tormented ghosts that serve as its permanent residents and ambassadors. Or something. Like it matters! The escalating shocks and turn-on-a-dime segues from melodrama to catfight humor are the real draw here -- that and the cast, which would probably be more widely appreciated for its dazzling tonal control if the show weren't part of an inherently déclassé genre. The thickening mythology is intriguing, too -- and grimly funny. There's a pyramid scheme aspect to the way that the ghosts keep murdering the living, driving them to suicide or killing them off as collateral damage in other outrages. They're forcibly recruiting for the house, swelling the ranks of the tortured dead. The way Violet described it in her tearful confrontation with Tate, the young man essentially killed her mom by raping her and impregnating her with a demon-spawn. (If I were Violet, I'd break up with him, too.) All that on top of Tate's other, past murders. I gotta hand it to the kid, he's a hard worker; if this were "Glengarry Glen Ross," he'd take the Cadillac away from Ricky Roma.

As Constance, Jessica Lange should win not just a best supporting actress Emmy, but a special bonus award for keeping a straight face when Chad answered her terse, "Man should not lie with man, it's an abomination!" with "So's that hairdo." That was a good one, but I liked the dialogue in the climactic scene with Constance, Moira and Hayden even better. Moira: "She's the most beautiful baby I've ever seen." Constance: "From blood and pain come perfection." Moira (appearing at the back of the kitchen): "Hey, bitches ... You wipe that slime off my baby yet?" Now that Vivien has given birth in the most psychedelically nightmarish delivery sequence since "Rosemary's Baby" -- the dolly-backward away from her blood-drenched corpse had an Argento-like mournfulness -- where can the show possibly go from here? The previews for next week's episode set up a multi-tentacled undead custody battle over the two babies, and showed Ben threatening Constance and putting a gun to his own head. My money's on Ben becoming the final regular cast member to join the ranks of the spirit world, thus paving the way for new arrivals in the Murder House next season. With the body count somewhere in the double digits, the latest buyers should be able to pick the place up for a song.

I'm a bit perturbed that executive producer Ryan Murphy and Brad Falchuk's FX series apparently claimed most of their enthusiasm this year, leaving their exuberantly silly and occasionally brilliant Fox network series "Glee" to founder this season and eventually succumb to the stupidity and half-assedness that were always nipping at its heels even during strong weeks. But this outcome was creatively and perhaps biologically inevitable. As the doctor explained, all the necessary nutrients were devoured by the larger fetus.