Are those startling poverty numbers accurate? 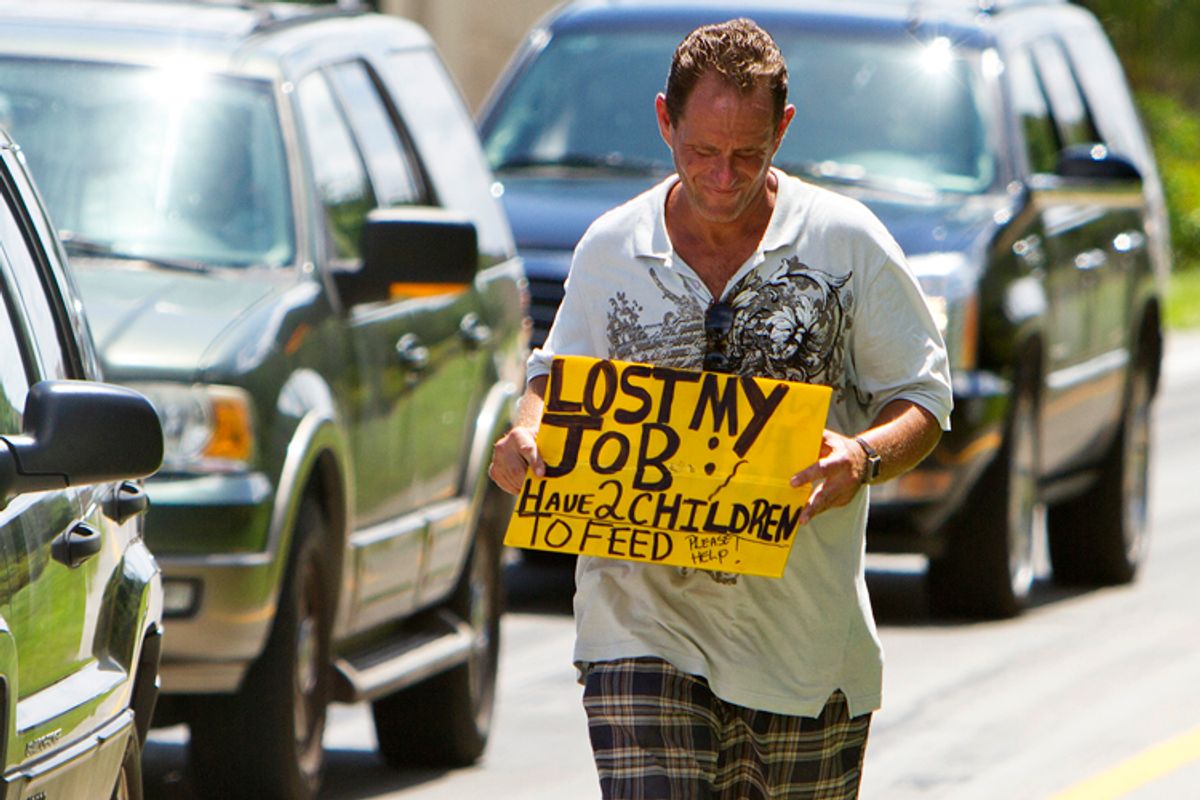 A man who did not wish to be identified, who lost his job two months ago after being hurt on the job, works to collect money for his family on a Miami street corner (AP/J Pat Carter)
--

This week, the Associated Press reported a startling figure, citing a new census analysis: In 2010, about one in two Americans were living below the poverty line or in the low-income category.

The AP reported that, using a new alternative measure of poverty that "takes into account medical, commuting and other living costs as well as taxes," about 48 percent of Americans are either below the poverty level or below 199 percent of the poverty level, which the AP described as the "low-income category."

But on Thursday, Sharon Bernstein, a reporter at NBC's Los Angeles affiliate, disputed the figures used by the AP. In a story titled "News stories saying 50 percent of Americans are low-income or in poverty may be wrong, Census analysts in LA said," she wrote of the widely picked-up figures:

But while poverty in the United States is certainly an important issue, those figures appear to be wrong, perhaps based on a misunderstanding of the data by journalists who did not go back to the source to doublecheck their figures, said analysts at the U.S. Census Bureau district office in Los Angeles.

NBCLA worked with three data analysts at the Census Bureau to check the data, and the real figures do indeed appear to be quite different.

That's a total of 31.8 percent, far lower than the dramatic figure of 50 percent that was included in more than 300 online news reports, and multiple TV news broadcasts, including Thursday's "Today in LA."

That is a wide gap and those are strong charges, so I decided to look into what happened here. In short, the AP is standing by its story, and the census is supporting the AP on the numbers. The only thing that's in real dispute is the definition of "low income."

“We did not misunderstand the data," said AP spokesman Jack Stokes in an email. "The AP story was vetted by the Census Bureau in Washington.”

The AP numbers come from what's known as the Supplemental Poverty Measure, which was developed because of perceived shortcomings in the official poverty measure. How do the two measures differ?

The Official Poverty Measure counts "gross before-tax cash income" to measure resources. The Supplemental counts income plus benefits like school lunch or housing subsidies and minus taxes and medical expenses.

The Official calculates a poverty threshold based on the "cost of a minimum diet multiplied by three." The Supplemental poverty threshold, on the other hand, uses "a dollar amount spent on a basic set of goods that includes food, clothing, shelter,and utilities," based on consumer spending data. There are other differences, outlined in these charts from the Census.

The AP's 48 percent poor or low-income figure comes from table 4 of this census report (.pdf) on the Supplemental Poverty Measure. (See here for an explanation of how the calculations were done.)

But in a statement to Salon, the census affirmed the numbers in the AP piece as accurate. So the speculation in the NBC piece that journalists reporting the original story did not "double-check their figures" is baseless.

Bernstein, the author of the NBC story, stressed to me in an interview that she had been referred to those figures by the census' own analysts in Los Angeles. "I was taken there by three people in the Census Bureau," she said. "And it's their analysis I'm quoting."

The only real area of dispute I can find is over the definition of "low-income."

"The Census Bureau does not have a formal definition for 'low income.' That terminology was used by the author of the [AP] story," says Kathleen Short, a census economist who wrote the Supplemental report and was quoted in the AP piece. She adds that the figures cited by the AP are accurate.

I asked AP spokesman Jack Stokes about this point, and he responded that the AP is using a common formulation for "low-income," one that was tacitly accepted by the census:

In the AP interview, Census acknowledged that below 200 percent is a common cutoff for those considered “low income.” But Census said they don’t want to be the ones to assign that label, although the reporter is free to use it based on what other groups, both academic and otherwise, have said.

Meanwhile, NBC has now published a follow-up story that quotes Short emphasizing that she does not endorse the "low income" label.

Bottom line: the original point of the AP piece still stands: 48 percent of Americans fall below 199 percent of the new, alternative poverty threshold. Whether those between 100 percent and 199 percent of the threshold should be called "low income" is a different -- and inherently subjective -- question.