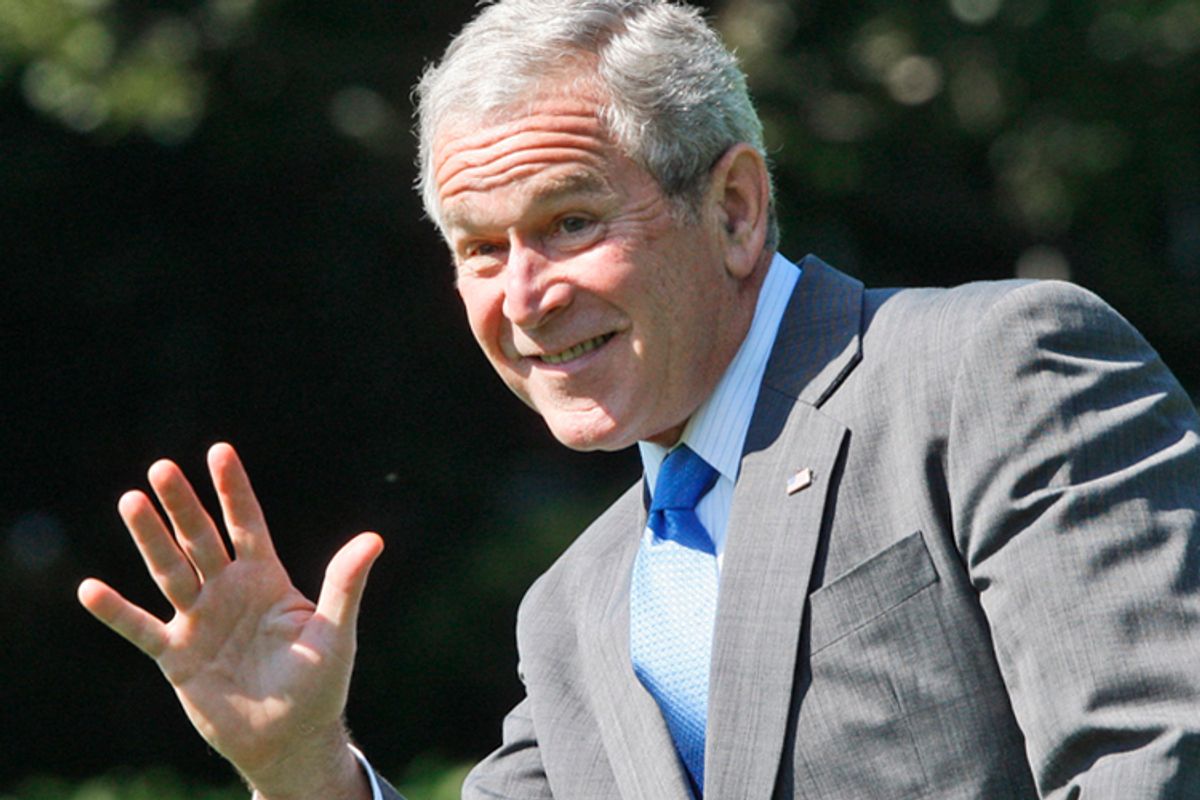 Every weekday at noon inside a North Dallas shopping mall, the 43rd president of the United States sits down at his usual table in the food court with two plates of magic fries, a jumbo Mello Yellow and a grande chimichanga with extra queso.  “When he first started showin’ up at the mall, people would always come over and ask for his autograph or whatever,” said Daryl Vanderveen, a 19-year-old cashier at Sbarro Pizza. “But now that he’s here so much nobody even looks up from their lunch.”

Sources interviewed for this article said that Mr. Bush spends at least eight hours of each day at the Preston Hollow Shopping Center, a popular retail destination near his home in suburban Dallas. “Other than that chimichanga lunch he doesn’t really have a set routine,” said one source. “Sometimes he’ll hang around Lenscrafters trying on glasses or head over to Abercrombie & Fitch and watch the girls fold pants. Last week I saw him inside Pottery Barn sleeping in a leather recliner.”

But some mall employees are beginning to complain about the former president. “The other day I was taking a smoke break near the fountain and he just kept asking me stupid stuff like, ‘Guess how fast I could get a hot dog in the White House,’” said Amber Kaul, who works part-time at the T-Mobile kiosk. “So finally I’m like, ‘I dunno, ten minutes?’ And he’s all like ‘more like two minutes’ and then he snaps his fingers and gives me this cocky look like I’m supposed to care.” Donna Simpson, a barista at the mall Starbucks, said the former president is often a distraction from her work. “He sits down over there with a pencil and a piece of paper and supposedly starts working on his 'Freedom Institute,'” said Ms. Simpson. “But after about five minutes he comes over, takes a seat at the counter and starts telling how there’s Milk Duds on Air Force One or how Dick Cheney has a glass eye. I’m like, ‘Dude, there’s about 50 people in line right now, go away!'”

Nestor Martinez, a 20-year-old mall security guard, confirmed that on at least two occasions he’s had to speak to the former president about his behavior. “We started getting complaints that he was hanging around the men’s room asking guys if they wanted to have their picture taken with him,” said Mr. Martinez. “When I told him to stop, he said, ‘Let’s go sort it out over a game of Donkey Kong.' So after my shift we went over to the arcade and I beat him in a best of three. Then he got all pissy and said Donkey Kong sucks anyways.”

Two sources have confirmed that former Secretary of State Condoleezza Rice was recently enlisted by friends and former aides to speak to Mr. Bush about the situation. “She asked him point blank if it was true that he'd spent an entire afternoon doing nothing but riding up and down the escalators,” said the source. “The president got really defensive and refused to give Condi a straight answer.”

When the president left office nearly three years ago, it was announced that he would establish a "Freedom Institute" and work full-time toward promoting democracy and human rights throughout the world. But some close friends and former advisors admit privately that Mr. Bush has not made progress on either front. “He told me he was going to dedicate the rest of his life to confronting tyranny," said one prominent GOP fundraiser. "I'm not sure how you do that by hanging around the mall challenging strangers to games of Ms. Pac-Man.”

In response to questions about the president’s schedule, a spokesman released the following statement. “The president continues to work towards advancing freedom around the world.”