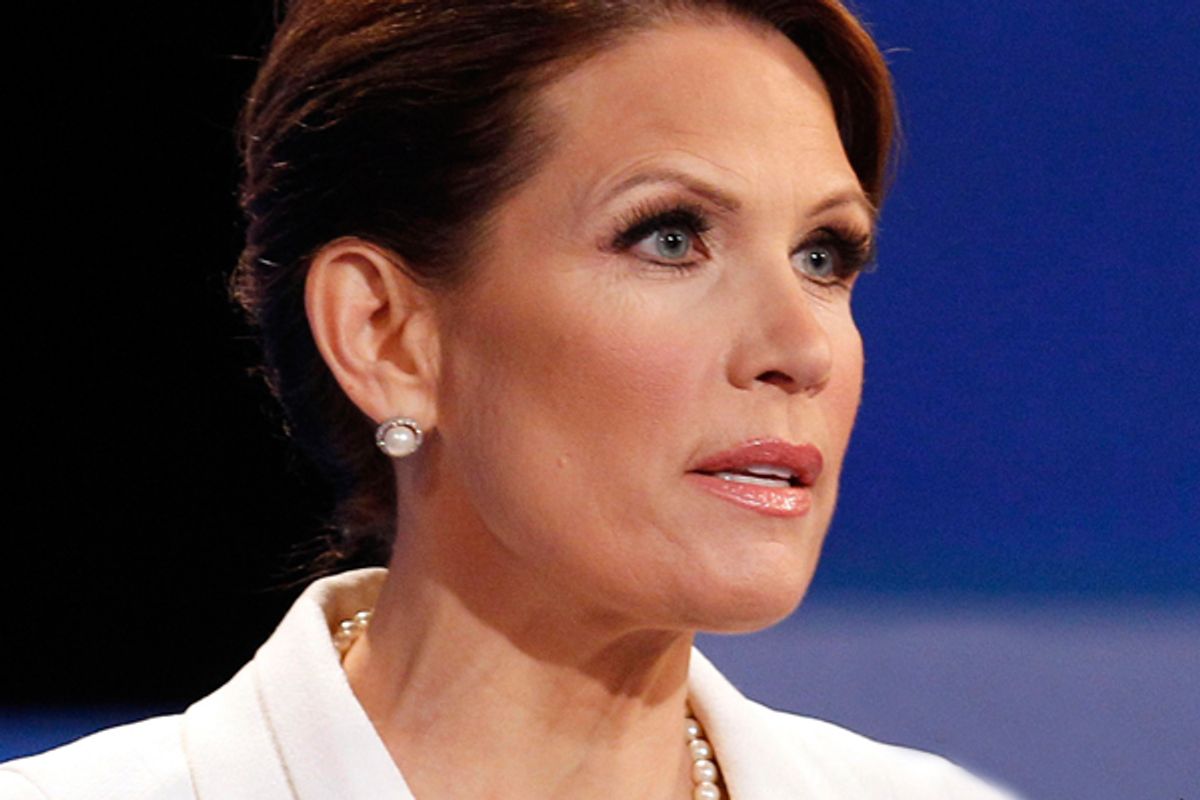 Since his polling surge began in late November, Michele Bachmann has been lobbing criticism at Newt Gingrich, but in the past few days she's really stepped up the assault.

At last night's debate, she blasted the former speaker for denying that the giant consulting fees he took from Freddie Mac were for lobbying work, charging that Gingrich "had his hand out and he was taking $1.6 million to influence senior Republicans to keep the scam going in Washington." She also portrayed him as soft on the "barbaric" practice of "partial-birth" abortion (because he supported the reelection campaigns of House Republicans in the mid-1990s who voted against the procedure), and questioned his electability.

And she picked up right where she left off this morning, telling reporters that Gingrich has "the most liberal record on illegal immigration" of the GOP candidates, accusing him of treating her with condescension during the debate, and hinting at possible sexism on Newt's part. From CNN's account:

"I am not a student of his," she said. "I am a serious candidate for the presidency, and I think it's important that I be treated like an equal on that stage."

Asked if she thought Gingrich was treating her differently because of her gender, Bachmann would not say.

"People looking at that would have to make that accusation," she said.

What is Bachmann's calculation here? Three possibilities come to mind:

1) She's angling to be Mitt Romney's V.P.: As just about every commentator has noted, Bachmann reserved her fire for Gingrich at the debate and left Romney alone, even though Romney's conservative credentials are just as suspect (if not more so). This is the kind of move that a long-shot candidate thinking ahead to the veepstakes might make: As the presidential nominee, Romney would badly need to put someone who passes every conservative litmus test and genuinely fires up the base on the ticket with him. In theory, Bachmann could play this role. So why not do Romney a huge favor now and help take out Gingrich, then hope the favor will be returned in a few months?

But there are two potential problems with this theory. One is that it's basically impossible to imagine Romney, no matter how desperate he is to put a true-believer on the ticket, ever picking Bachmann. There are plenty of very conservative V.P. prospects out there who aren't prone to hijacking news cycles with, say, a dubious personal anecdote about a vaccination causing a young girl to become mentally retarded. (The counterpoint to this, courtesy of Jonathan Chait: Sure, Romney would never take Bachmann -- but maybe she's delusional enough to believe he would, and thus to behave now like an aspiring running mate!) The other problem is that while she's singled Gingrich out this week, Bachmann has also been attacking Romney. Which leads to ...

2) She still thinks she can win the nomination: Less than a week ago, Bachmann was warning Republicans that Gingrich and Romney were indistinguishable, each an untrustworthy flip-flopper and each unwilling to own up to serious past crimes against conservatism. "Newt Romney," she dubbed them. This is more something that someone who still wants to beat Romney, rather than run with him, would say. That she's focused her assault on Gingrich this week might just be a matter of tactical urgency: Iowa is less than three weeks away and he's occupying the turf -- main conservative alternative to Romney -- that she wants for herself. So dismantling Romney right now isn't really her concern. To win Iowa (where she's now in the high single-digits), Bachmann badly needs Gingrich to collapse and for his supporters to move to her campaign. Then, if she could win Iowa, she might get the one-on-one race with Romney that she really wants. Obviously, this is a far-fetched scenario, but it could be on her mind.

3) She just doesn't like Newt -- period. Think Of Rudy Giuliani's sudden, seemingly out-of-nowhere praise of Gingrich and broadsides against Mitt Romney this week. On paper, it makes no sense, but when you consider that Giuliani (along with John McCain and Mike Huckabee) couldn't stand Romney at a personal level while they were both running for president in 2008, it does. Maybe there's some kind of history between Gingrich and Bachmann that we don't know about, or maybe she really is offended by the way he's addressed her at debates. It could be that for reasons having nothing to do with strategy and everything to do with pique she's decided to make his political life miserable.