Direct elections: A threat to America!

Why are Mitch McConnell and the rest of the GOP so terrified of a national popular vote? 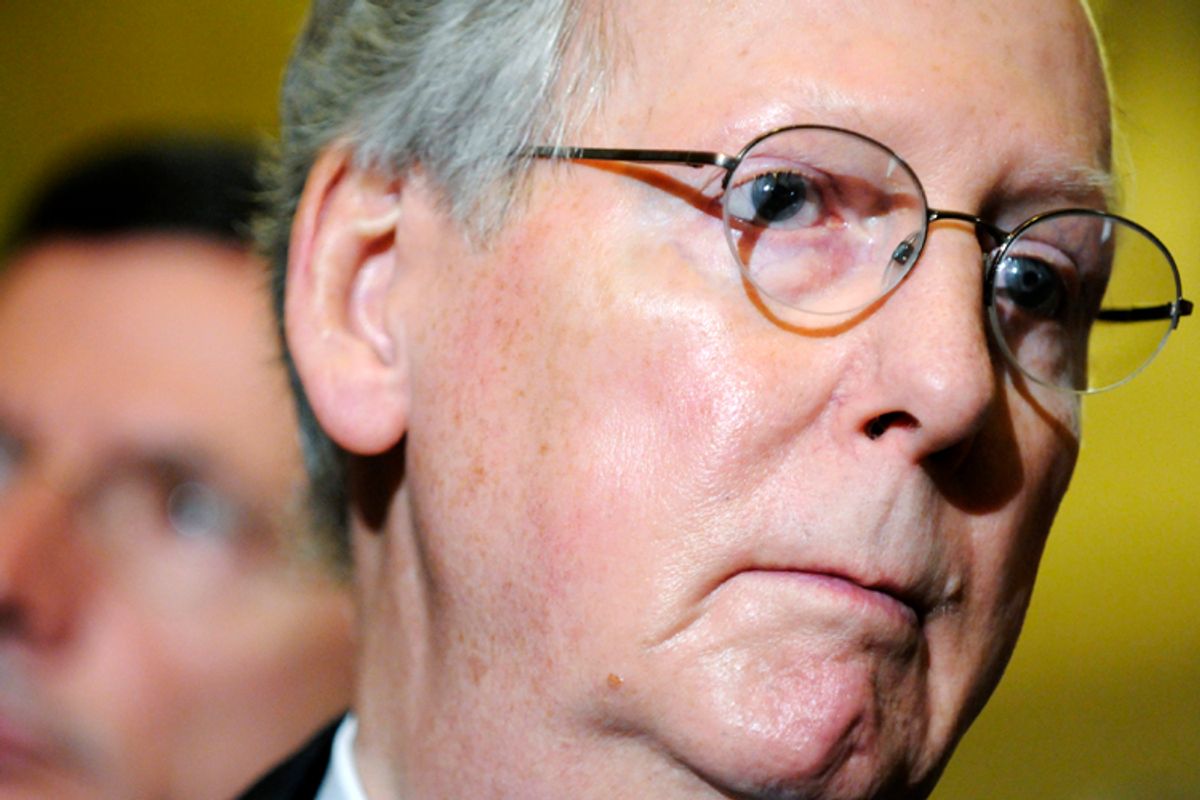 When the Senate minority leader of the United States calls something "a genuine threat to our country," everyone -- regardless of party -- should listen. Even in the post-9/11 era of overheated language and hyper-partisanship, that kind of declaration from such a powerful public official is not to be taken lightly.

So, what horrible menace to our way of life was Sen. Mitch McConnell, R-Ky., talking about when he recently uttered those words? Communism? Al-Qaida? Hostile extraterrestrials?

None of the above. He was referring to democracy.

That sounds hard to believe, but it's absolutely true. In a speech last week to the Heritage Foundation, McConnell used that War on Terror-flavored jeremiad about an existential "threat" to describe a grass-roots effort aimed at electing presidents via a national popular vote.

Prompted by frustration with swing states' disproportionate power, the national popular vote idea is elegant in its simplicity. States commit their Electoral College votes to the national popular vote winner, regardless of the outcome of the presidential contest within their boundaries. The plan does not go into effect until a majority of Electoral College votes are signed on, but if and when that happens, America finally gets what should be a fundamental democratic guarantee: that our president is the candidate who received the majority of votes.

To most readers, that seems like a non-ideological no-brainer; it means every vote is equally important, regardless of geography. And why shouldn't it be that way? After all, there's no moral or substantive reason that a vote in liberal Denver should be more valued by a presidential election system than a vote in rural Idaho just because the Denver vote was cast in the swing state of Colorado. Similarly, there's no democratic justification for candidates reaching the Oval Office when they didn't win the most votes.

Yet, despite those nonpartisan truisms, McConnell billed the accelerating national popular vote campaign as a nefarious liberal plot. While such a paranoid theory sounds like a “Saturday Night Live” spoof of a Fox News diatribe, the Senate minority leader was dead serious, which made his statements all the more hilarious -- but also painfully revealing. They highlight the fact that Republicans are now openly defining themselves as opponents of the most basic democratic ideals.

In the states, the onslaught against voting has been unself-consciously overt. As civil rights lawyer Judith Browne Dianis told CNN, "Through a spate of restrictive laws passed in Republican-led legislatures, a disproportionate number of African-Americans, Latinos, people with disabilities, the elderly and the young will find voting difficult and in many cases impossible." These statutes, she notes, "require a state photo ID to vote, limit early voting, place strict requirements on voter registration and deny voting rights to Americans with criminal records who have paid their debt to society."

Now, with 132 electoral votes signing on to the national popular vote compact, there's the real possibility of more democratic presidential elections. So the highest-ranking Republican in America is mobilizing the opposition.

Taken together, this coordinated war on democracy leads to a frightening question: Why is it being waged?

Republicans claim they are moved by (totally unproven) fears of rampant voter fraud, but their obvious motivation is authoritarian self-interest. With polls showing the party's policy goals wholly out of line with public attitudes, the GOP is trying to limit the public's democratic rights. In other words, Republicanism is at odds with public opinion. So, rather than bend to that opinion, Republicans are trying to disenfranchise it.

Such fanatical ends-justify-the-means-ism was once the exclusive hallmark of foreign banana republics. Should our own Banana Republicans succeed in their assault on democracy, that's exactly the kind of backward country America will become.