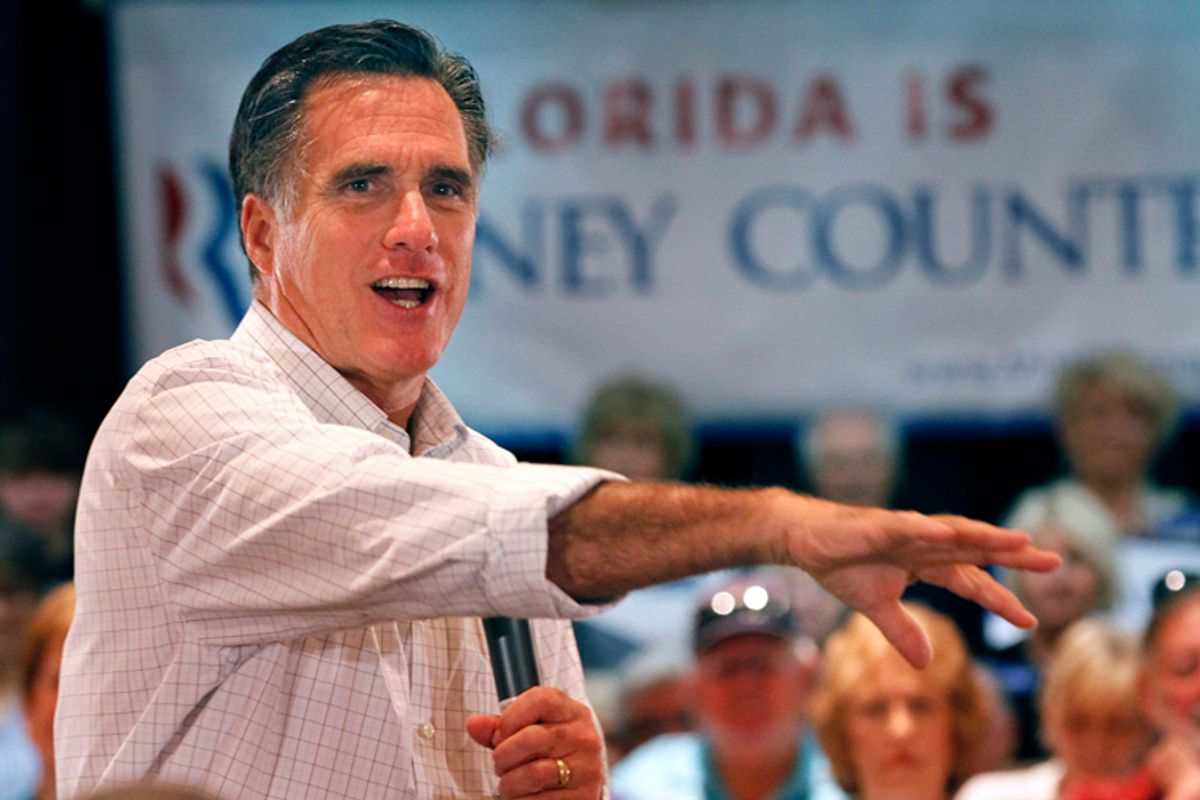 With the Iowa caucuses less than three weeks away, the narrowed Republican presidential contest between Romney, Newt Gingrich, and the surging Ron Paul remains a muddle.  To lower expectations for his own performance and raise scrutiny on Gingrich, Romney this week began referring to the former speaker as the frontrunner.

National and state polls suggest Gingrich is now in the driver’s seat for the nomination, and as Talking Points Memo’s Eric Kleefeld argues, the primary calendar in January favors Gingrich. Accordingly, some are already comparing Romney to Hillary Clinton in 2008—the inevitable candidate whose candidacy became, in campaign lingo, "evitable."

But the Romney:Gingrich/Clinton:Obama analogy may be backwards. Romney is the Republican Obama this year—or, if he isn’t, he’d better refashion himself that way, and fast. Those with strong memories know that Obama’s original strategy hinged upon surviving January’s early contests in order to have a chance to defeat Hillary Clinton over the long term, and increasingly it looks like Romney will need to survive January to do the same.

Indeed, Romney’s Monday comments to reporters in New Hampshire suggest he and his campaign are girding for—perhaps now even hoping for—a protracted fight that “could go months and months.” Said Romney: “It’s a very fluid electorate. I think I’ll get the nomination. I can’t predict when. I’ve got—what?—five or six more months to go to make that a reality.”  Romneys' s wife even go into the act by speculating about delegate math.

To turn a short sprint into a long march, however, Romney may need to do something he came fell just short of accomplishing four years ago in his failed bid to defeat John McCain: Win Florida.

The Republican race of 2012 bears some resemblance to the Democratic race of 2008. To deny Hillary Clinton the momentum necessary for a John Kerry-like run through the 2008 Democratic primary contest, Obama campaign manager David Plouffe knew his candide needed key January wins. Obama got two: He trampled Clinton in Iowa and then, after losing New Hampshire and Nevada, stunted Clinton’s comeback by parlaying massive black support to win South Carolina. Through the first four contests, the two Democrats were tied 2-2. After split results again on Super Tuesday, Obama proceeded to overpower the then-bankrupt Clinton campaign during the three-week, 11-contest stretch in the mid-February that followed. By the time Clinton regained her balance and restocked her coffers, Obama had built his insurmountable delegate lead.

Gingrich’s bubble may burst before the primaries begin. Paul's clever attack ads have certainly helped to deflate the former Speaker. But if not, Romney may be forced to replicate Obama’s 2008 strategy: Turn January into a split decision—Iowa and South Carolina for Newt, New Hampshire and Florida for Mitt—so the former Massachusetts governor can move the contest into February. The GOP’s 2012 February calendar is lighter than it was for Democrats four years ago, but provides Romney two crucial advantages.

The first is time itself: The longer it takes Gingrich to close the deal, the more likely it is that the former Speaker, through some combination of disorganization, petulance, presumptuousness, or lack of funding, will self-destruct. But second and perhaps more crucially, the 2008 Republican primary results suggest that the 2012 February states should be particularly favorable to Romney. Of the seven states holding caucuses or primaries, in 2008 Romney beat McCain in five of them—Colorado, Maine, Michigan, Minnesota, and Nevada. And one of the two Romney lost was McCain’s home state of Arizona. (The seventh state is Missouri.)

Regional preferences account for some of Romney’s 2008 success in the February 2012 calendar states. He performed best in the Mountain West, while Mike Huckabee fared well in the Deep South and McCain dominated the Rust Belt, Southwest and Pacific coast. But the February calendar also favors Romney because four of the month’s contests are caucuses, and in 2008 Romney excelled in caucuses. In fact, by the end of the 2008 primary season, Romney’s turnout support in caucus states was more than twice McCain’s.

“If Romney needs to make a comeback, it won’t be in South Carolina—too tough for him,” Republican strategist Alex Castellanos told me. “But if he doesn't come back in Florida, Newt will have too much momentum going into the post-February states. If Mitt can score in Florida, he is in the race. If he doesn't, it ends early.

But with recent polls showing Gingrich leading there, what will it take for Romney to steal the Sunshine State? The short answer is probably : start pounding the hell out of Gingrich using a sophisticated negative television and radio blitz on the issue of Medicare to win Florida’s pivotal seniors.

In 2008, Florida was Rudy Giuliani’s big-gambit, epic fail state. He banked on doing well with retired snowbirds. Giuliani’s deep and early investments kept the former New York City major atop the polls until January, but by then McCain catapulted ahead of both Romney and Giuliani. Although McCain eventually defeated Romney,  Romney didn’t lose by much statewide, garnering 31 percent to McCain’s 36 percent.

In that primary, a whopping 44 percent of Florida Republican voters were aged 60 or older, and 75 percent were aged 45 and over. (For comparative purposes, in South Carolina—itself a growing magnet for retiring snowbirds—the respective percentages were 39 percent and 67 percent.) According to exit polls, although Romney edged McCain slightly among the 50-64 year old subset, basically Romney won the under-40 vote and McCain won the over-40 vote. If Romney can pair his younger support four years ago with a better performance among Florida seniors this year, he can win Florida on January 31.

And the best way to get the attention of Republican seniors in Florida is to remind them how Gingrich, in the first major policy and political gambit of his speakership, lost the 1995 Medicare fight with Bill Clinton—lost it on policy, lost it politically, and lost it on optics. Indeed, so gleeful was the Clinton’s re-election team to have Newt as their foil, they ran not one but three different “Dole-Gingrich” attack ads against poor Bob Dole in 1996. Forget the marital problems and Tiffany receipts and even his chummy video appearance with Nancy Pelosi: Newt’s biggest electoral liability, in both the primaries and the general election if he is the nominee, is Medicare.

For their part, Florida Republican insiders and political analysts believe the nomination process will continue well past their state’s primary,  the scenario on which Romney is relying.  (President Obama is hoping for a protracted GOP battle, too, albeit for obvious, self-serving reasons.) And if Romney wants to prove that he’s a better, stronger and especially tougher Republican candidate than he was four years ago, he needs to show he can punch above his weight class by picking and winning a political fight in a big, non-Western primary state. “Florida is the test Romney hasn't had and needs to demonstrate his presidential character,” Castellanos says. “Last cycle, he almost beat McCain in Florida, and if he had he would have won the nomination. This time, it may come down to Florida again.”

Naturally, Mitt Romney would prefer a quick, decisive conquering of the rest of the field by stringing together a non-stop run of victories during January. But given that his persistent 20-25 percent level of support in the national polls, not to mention various state polls showing him presently trailing Gingrich in Iowa, South Carolina and Florida, that’s very unlikely to happen.

Now it is Romney who needs a long, protracted fight. To change the media narrative back to Mitt the Inevitable, he also needs to post some big victories during February, when the calendar is tilted in his favor. And he needs a win to Florida to get there.