What our smog has wrought

A brown pollution cloud is making cyclones more intense. We need to stop the partisanship and fix the problem 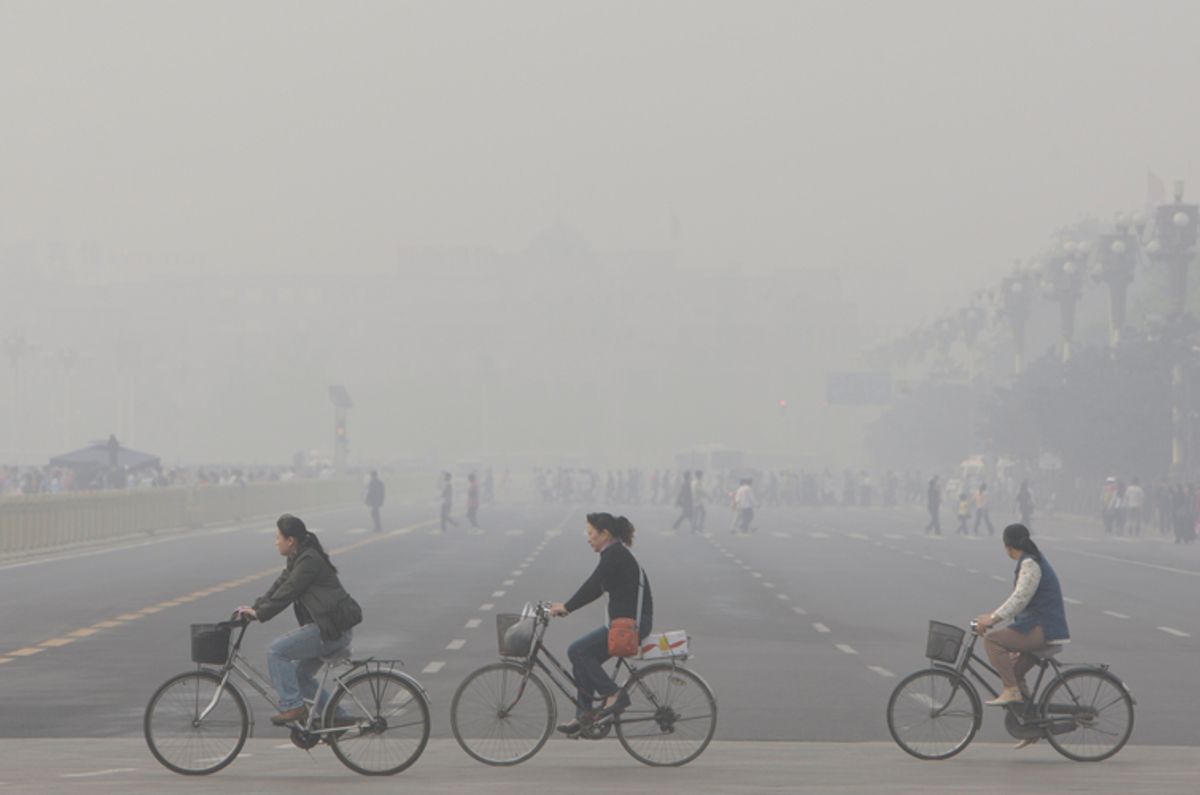 Have you heard about the great brown cloud? No, it’s not a new nickname for Donald Trump (his cloud is more an intergalactic nimbus of Aqua Velva and Tang), or the ominous menace in a new Stephen King novel. It’s almost as nasty, though.

The Atmospheric Brown Cloud, formerly known as the Asian Brown Cloud, is a mass of air pollution hovering over northern India along the southern Himalayas and down across Bangladesh and the Bay of Bengal. The cloud began growing shortly after World War II, a smoggy mass of soot and sulfates from diesel emissions, wood fires and other burning stuff that’s almost two miles thick.

A new study by scientists from a number of research organizations – including the National Oceanic and Atmospheric Administration (NOAA) and the Scripps Institution of Oceanography – finds that the cloud’s pollutants are making cyclones in the Arabian Sea more intense.

This is a very big deal, because, as Dean Kuipers writes in the Los Angeles Times, “After the apparent recent increase in the number and intensity of hurricanes in the Atlantic Ocean and Gulf of Mexico, including the devastation of Hurricane Katrina in 2005, climate watchers everywhere have speculated whether these storms were made stronger by industrial or man-made emissions. This is reportedly the first study to indicate that human activity may, in fact, affect large storms.”

Wind shear turbulence can help break up cyclones and keep them from becoming bigger storm systems. But shade created by the great brown cloud lowers water temperature, which in turn cuts down wind shear, allowing more powerful storms to form. Since 1998, according to NOAA, there have been five storms in the region with winds greater than 120 miles per hour – killing more than 3,500 people and generating $6.5 billion worth of damage.

Anjuli Bamzai, program director of the National Science Foundation’s Division of Atmospheric and Geospace Sciences, said, "This study is a striking example of how human actions, on a large enough scale, in this case massive regional air pollution caused by inefficient fuel combustion, can result in unintended consequences. These consequences include highly destructive summer cyclones that were rare or non-existent in this monsoon region 30 or so years ago."

The good news, Amato Evan, lead author of the study and University of Virginia professor of environmental sciences, told the L.A. Times is that, “If emissions are reduced, we expect that this kind of trend would reverse on time scales of a few months. It’s not like greenhouse gases, where we think we’re already in trouble. With these kinds of aerosols, if you just stopped all the emissions right now, the atmosphere would become much cleaner in a matter of weeks. And then the whole climate system, the ocean and the atmosphere, would essentially lose memory of those aerosols. It’s pretty dramatic.”

But that’s about the only good news. The unsettling, worldwide evidence of climate change keeps pouring in. As the U.N.’s climate change summit in Durban, South Africa, began a couple of weeks ago (and ultimately made some small progress on carbon emissions), its World Meteorological Organization (WMO) presented data indicating that the last 15 years have been the warmest on record, with levels of greenhouse gases continuing to climb and potentially a global average temperature rise of two to 2.4 degrees Celsius on its way – anything above two degrees can lead to mass extinctions and other calamities. Michel Jarraud, the WMO’s secretary general pronounced, “Our science is solid and it proves unequivocally that the world is warming and that this warming is due to human activities.”

A few days later, NOAA reported that, “To date, the United States set a record with 12 separate billion dollar weather/climate disasters in 2011, with an aggregate damage total of approximately $52 billion. This record year breaks the previous record of nine billion-dollar weather/climate disasters in one year, which occurred in 2008. These twelve disasters alone resulted in the tragic loss of 646 lives, with the National Weather Service reporting over 1,000 deaths across all weather categories for the year.”

In a recent speech at the fall meeting of the American Geophysical Union, NOAA administrator Jane Lubchenco cited statistics from Munich Re, the world’s largest reinsurer, which recently declared, “The only possible explanation for the rise in weather-related catastrophes is climate change.” Lubchenco added, “What we’re seeing this year is not just an anomalous year, but a harbinger of things to come for at least a subset of those extreme events that we are tallying.” (At that same American Geophysical Union conference a biologist and photojournalist reported that with the reduction of Arctic sea ice habitat, polar bears are resorting – no joke -- to cannibalism.)

Then the National Resources Defense Council (NRDC) weighed in with an “Extreme Weather Map” (see it here). “In 2011, there were at least 2,941 monthly weather records broken by extreme events that struck communities in the U.S.,” the advocacy group announced. Each of the 50 states was affected. “The frequency and intensity of some extreme events is likely to worsen with climate change … [inflicting] tremendous costs on our health and families.”

What’s appalling is that the American public knows this, gets it, and realizes that something must be done, but politicians and corporate greed stand in the way. A recent survey by Yale University’s Project on Climate Change Communication and the George Mason University Center for Climate Change Communication found that 65 percent of Americans polled “said that global warming is affecting weather in the United States”; half believe it is caused “mostly by human activities,” up 3 points since May. A similar survey by the nonprofit environmental group ecoAmerica found that 57 percent of Americans realize, “If we don’t do something about climate change now, we can end up having our farmland turned to desert.” (Thanks for these stats to American Progress Fellow Joe Romm, editor of the Climate Progress blog at Think Progress.)

During the 2008 presidential campaign Republican standard bearers John McCain and Sarah Palin – and Newt Gingrich, Mitt Romney and John Boehner -- acknowledged the reality of climate change (although Palin didn’t believe it was due to human activity). But these days, the issue is as anathematic to the GOP presidential field as abortion or gun control, the skunk at the Grand Old (Garden) Party. (Even the one exception, Jon Huntsman, started flip-flopping last week, creating his own great brown cloud by stating one day, “There are questions about the validity of the science,” and on the next, “I put my faith and trust in science.”)

In a National Journal cover story, aptly headlined “Heads in the Sand,” Coral Davenport writes, “Here’s what has changed for Republican politicians: The rise of the tea party, its influence in the Republican Party, its crusade against government regulations, and the influx into electoral politics of vast sums of money from energy companies and sympathetic interest groups.

“Republicans have long had close financial ties to the fossil-fuel industry, of course. Between 1998 and 2010, the oil-and-gas industry gave 75 percent of its $284 million in political contributions to Republicans. But the 2010 Supreme Court decision in Citizens United v. Federal Election Commission, which allowed unlimited corporate spending on campaign advertisements, opened up a whole new avenue for interest groups to influence campaigns by flooding the airwaves with ads that support a political candidate or position. In the 2010 elections alone, the top five conservative and pro-industry outside groups and political action committees -- including the U.S. Chamber of Commerce and the Karl Rove-backed PAC American Crossroads, which have close ties to fossil-fuel interests -- spent a combined $105 million to support GOP candidates (compared with a combined $8 million that the top five environmental groups spent to back Democrats). Both sides could double those numbers in 2012.”

Money trumps truth. Davenport especially points a finger at the Tea Party super PAC Americans for Prosperity, founded by the Koch brothers, principal owners of the oil conglomerate Koch Industries. She writes, “As Koch Industries has lobbied aggressively against climate change policy, Americans for Prosperity has spearheaded an all-fronts campaign using advertising, social media and cross-country events aimed at electing lawmakers who will ensure that the oil industry won’t have to worry about any new regulations.”

She quotes Americans for Prosperity president Tim Phillips: “If you look at where the situation was three years ago and where it is today, there’s been a dramatic turnaround. Most of these candidates have figured out that the science has become political. We’ve made great headway. What it means for candidates on the Republican side is, if you… buy into green energy or you play footsie on this issue, you do so at your political peril. The vast majority of people who are involved in the [Republican] nominating process -- the conventions and the primaries -- are suspect of the science. And that’s our influence. Groups like Americans for Prosperity have done it.”

The smear tactics – like the Climategate emails, which have reared their misshapen head again -- and vast amounts of cash being thrown around by Americans for Prosperity, American Crossroads and the U.S. Chamber of Commerce make it even more risible that Rick Perry and others claim climate change is – in Perry’s words --  “a contrived phony mess,” a conspiracy by “a substantial number of scientists who have manipulated data so that they will have dollars rolling into their projects.” Yeah, those nerdy science types are swimming in dough. That’s why they get all the cool dates. A momentary pause here as I pound my head against the wall.

Former Republican Rep. Bob Inglis of South Carolina was defeated for reelection in his party primary last year, partly because he said climate change is real. “Being branded as anti-science is not a good future for us,” Inglis told National Journal. “How can we say to young people, we’re dismissing science? That’s not a good place for our party to be, and it’s not historically where we’ve been. There are conservative voices that will hopefully show the way back to conservatism and away from a populist rejection of science.”

William Reilly, head of the Environmental Protection Agency under George H.W. Bush, said, “Somehow, we’re operating on two levels of reality. One is ideological reality, which seems to work for some ideologues. But there is also the scientific reality. It was Republicans who traditionally have pushed for more science to underpin regulations. Science has suffered most severely in the current Republican Party. The ideologues will deny it right up to a point where there’s… a crisis -- and then they won’t anymore.”

But by then, of course, a great brown cloud may be the least of our ecological worries.