The shame of my mother's cluttered home made me keep men at a distance. Then I saw the house where Jon grew up 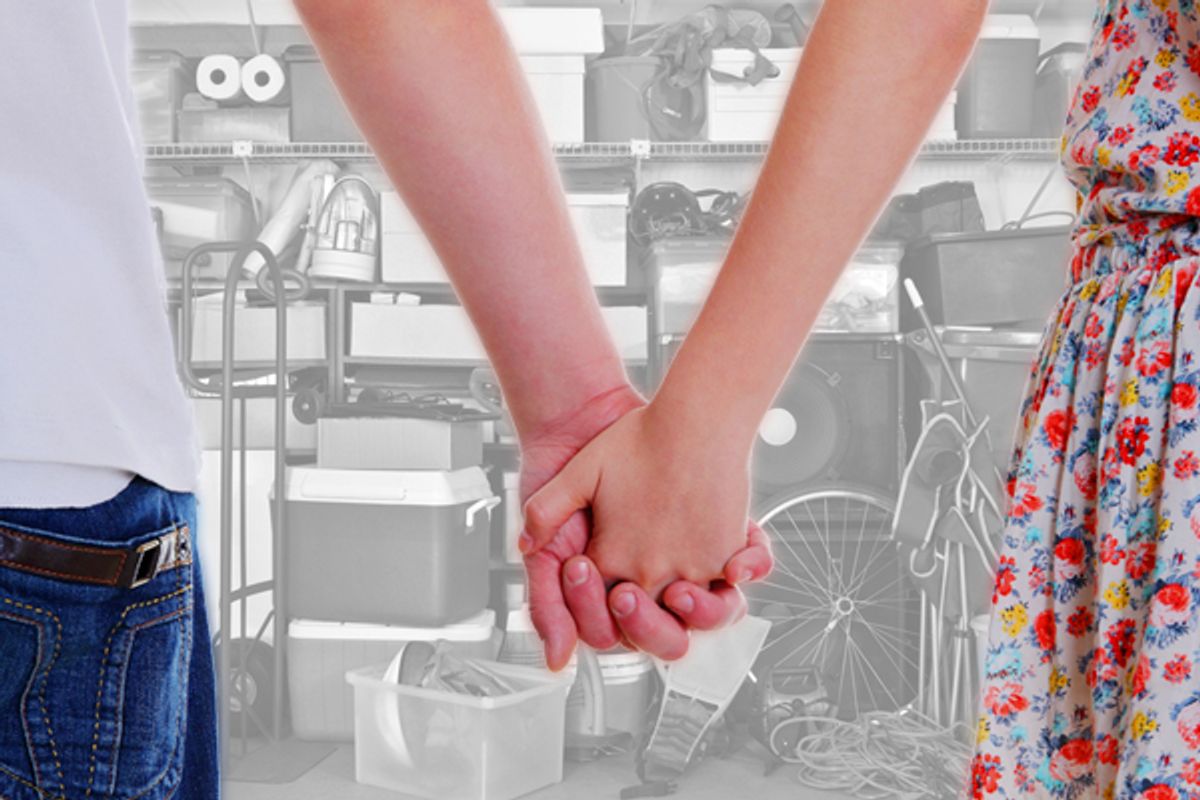 I was excited and nervous when Jon invited me to celebrate the first night of Hanukkah with his parents. Three months into our relationship, I would finally meet his family. But on the way there, he stopped the car to warn me: His mother had a lot of stuff.

He had no idea how much junk it would take to impress me. Jon and I had been quite frank about our lives. But open as we were, I was terrified to tell him the truth about the mess that I came from.

The Montreal duplex where I grew up was filled with shag rugs and teak shelves overloaded with paperbacks, records and overdue library books. My mother found it impossible to throw out unused parts of Kleenex, packets of Sweet’N Low and food, period. Our kitchen counters supported towers of stale Danish and rotting bananas.

My mother, born in Kirgizia during a stop on my grandparents’ flight from the Nazis, struggled with fears of having everything taken away from her, and understandably saved provisions, protecting herself from reexperiencing deprivation. She’d only had one doll as a child, so I was showered with them. Friends envied my ludicrous Barbie collection -- 200 dolls and two three-story fully furnished houses. They did not see the underside: stuffed animals and board games, bought on sale and still wrapped, forming mountains in the closet that left no space for my brother's and my clothes. I was bombarded with toys and elaborate fantasy worlds – all I wanted was some reality.

Her formative years characterized by loss, my mom built physical barricades around her, making her inaccessible to her children and husband. Credenzas piled next to each other like Tetris blocks, swivel chairs metastasized across both floors of the house. She recorded every movie on cable – thousands of video cassette tapes from "St. Elmo’s Fire" to "Shoah" lined the den like brick walls. Ironically, she was obsessed with organizational material: highlighters and binders choked any remaining room. If I’d had a bad dream, I could not rush to her in the middle of the night – the path was occluded. I never got close enough to smell her. My father slept in a cleared-out area in the basement.

Dad and I took long Sunday walks downtown, where he joked about Mom’s Tower of Babel of grocery circulars and obstacle courses of parkas. I sometimes caught him before dawn on garbage collection days, quietly bagging expired coupons. We’d share a knowing eye-roll: For each item jettisoned, another one – or more – would emerge. “Nature abhors a vacuum,” he whispered, “and a vacuum cleaner.” I giggled, thankful that his sofa bed had an empty side for me to crawl into during the night.

I also cleaned my own pink room, wiping my dusty mattress with wet toilet paper. But hours later, a new pile of ceramic piglets littered my dresser.

“For your collection,” Mom said. Her large frame stood in the doorway; she even hoarded calories.

Months earlier, I had shown interest in a pig candle. Where had she gotten these trinkets? How much more would be coming? I could do nothing to control the chaos which made me feel smaller and smaller. She tried hard to give me the things she hadn’t had, yet her gifts were suffocating me, taking up the space in which I needed to grow.

My mom’s piles were always barriers, but as I hit pre-adolescence, they became embarrassments. My classmates lived in neat houses with shiny built-ins and lemon-lime scents. Inviting friends over – especially boys – was an exercise in mad housekeeping. I scrambled to throw cheap suitcases into the cold storage, shut doors, and dust-busted magazine residues, hoping no one would enter the wrong rooms. Then, when she came home, my mother panicked, angry: “Where are my newspapers? Cleaning isn’t your job.”

This hoarding may have made some children rebel, but I projected the ugliness of my house onto my chubby sixth-grade body. I felt shamed, scared to get close to anybody, and I shied away from physical contact. When I finally had my first boyfriend, I was too afraid to even talk to him on the phone. He dumped me, which was a relief. After all, how could I ever bring him home? At 15, when I still hadn’t French-kissed a boy, I went to a friend’s party hoping to flirt with a crush. But his interest overwhelmed me and I ran out, terrified. I spent the night cleaning the kitchen cupboard, throwing out insect-infested flour and moldy tuna cans, desperate to rid this ugly out-of-orderness. When my mother walked in, she commanded me to put every container back exactly as I’d found it. “You can’t throw out things that don’t belong to you.” I had to sift through the garbage to retrieve cereal the same consistency as its cardboard box. I felt trapped.

While my Canadian friends went to local university, I insisted on studying in America. I set off on a search for home – a comfortable, calm place – launching myself into exile, the feeling I had felt in my family, figuring if I could control this experience, I could survive it. After college, I fled to London, where I worked in the visual arts and curated exhibitions, surrounding myself with sparse white-walled galleries and trendy beauty. From dorms to my first tiny flat, I became an increasing neat freak, preferring empty space to sofas, outright banning extraneous items like coffee tables. Through B.A., M.A., and Ph.D. dissertations on domesticity -- exploring how dwellings create and mirror the self -- and in a job as a curator at a museum of living rooms, I intellectualized to feel in control. In therapy, I struggled to understand that I was not my mother, nor her house. But I still felt uncomfortable having people over. Even at 30, when I met Jon and we developed our candid rapport, I continued to hide my hideous childhood abode from everyone, especially him.

But from the moment I entered the vestibule of his parents' house that first Hanukkah night and spotted a human-size tower of junk mail, I was astonished. Jon’s family was wealthier than mine, so their hoarding comprised a different class of object. The dining room, bigger than any of my parents’ rooms, had several antique tables stacked on their backs, boxes from Sotheby’s, collector toasters and Tiffany lamps galore. But what surprised me more than the boxed-up Edwardian decanter collection was Jon’s attitude. After lighting the candles, we wandered through their sprawling four-story Victorian residence as he pointed out each library shelf and ceramic tumbler. “Just in case we have 65 guests for dinner,” he joked.

I barraged Jon with questions. I wondered if his mother’s hoarding emerged from her immigrant experience: She had moved from Africa to London; was it easier to attach to objects than to foreign English people? “Your mother is so petite. Is she afraid of losing her husband and being small and alone?” Jon chuckled at my blunt over-analysis. He wasn’t sure about the roots of his mother’s collecting, but what ultimately stood out to me was that he was OK with it. He was aware of his family’s craziness, but he was also aware it wasn’t him.

I could no longer hold myself back. What were the chances that two children of hoarders would find each other? “My mother has stuff too!” I said. “Reams of it. Thumbtacks, onesies, laundry baskets bought on sale. My childhood bed is currently a warehouse for obsolete fax machines and photo-printers. My friends complain that their inheritances are being spent on cruises. Mine is being spent on hole punchers. My mother’s house,” I said, pointing all around me, “is even worse.”

“Worse.” I worried that I’d gone too far.

As he opened an attic freezer filled with 10-year-old frozen kosher turkeys, I understood: Like me, he had grown up in the pockets of affection, surrounded by record players and hotel-shampoo collections. Our candor together countered our childhoods of hidden secrets. Being open and joking about our past messes could help clean them up. His detachment from his mother's mishigas might help guide my own. My attraction to Jon was enhanced by his ability to face the ugly and the odd, to accept it without judgment or fear.

But most of all, I understood that after three decades, I had finally found someone I could bring home.