A traveling exhibition brings the work of the self-taught painter (and R.E.M. cover artist) into the spotlight 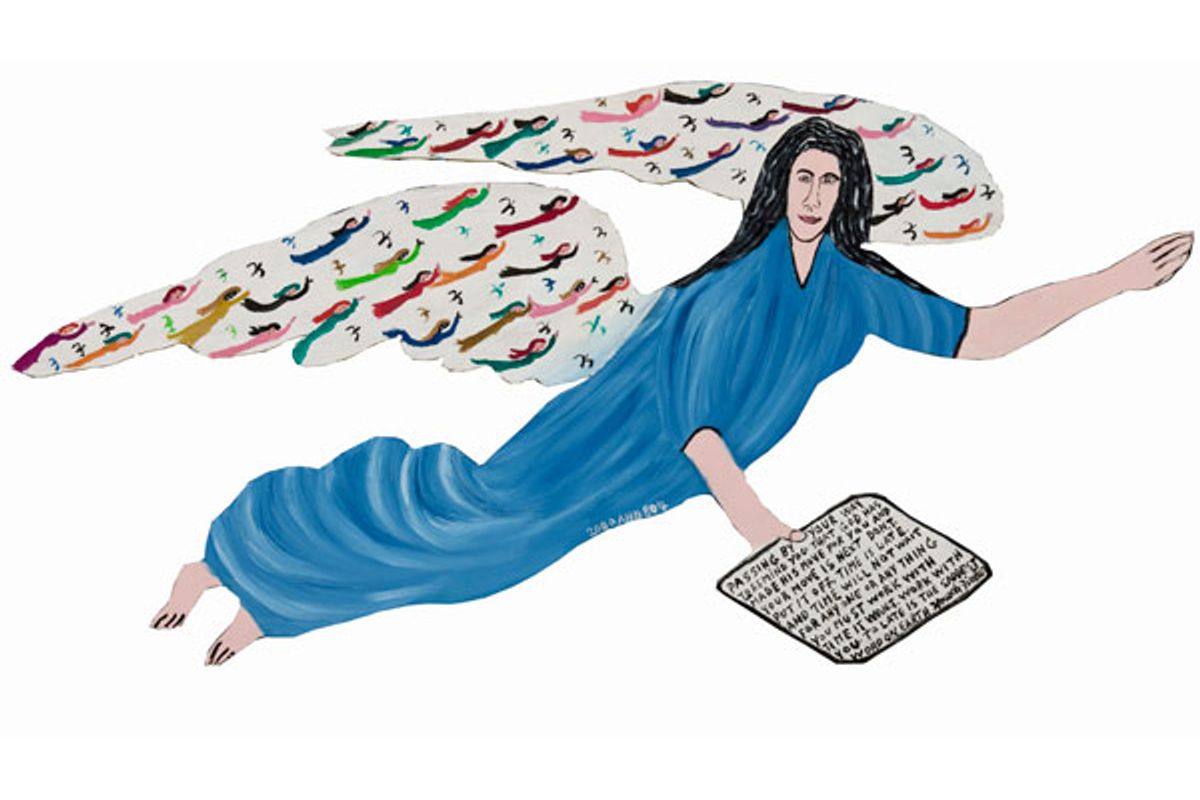 The feverishly productive painter who designed Rolling Stone magazine's 1985 album cover of the year was also a modern-day mystic whose studio and "sculpture garden" (featured heavily in the music video for R.E.M.'s "Radio Free Europe") was long mistaken by his neighbors for a junkyard.

Rev. Howard Finster's more than 45,000 artworks -- some primarily religious in nature, others concerned with historical figures such as George Washington or pop-culture icons like Elvis -- are interesting and idiosyncratic examples of 20th century "self-taught art." During Finster's lifetime, his pieces were shown in locations as diverse as his secluded Georgia property and the Venice Biennale.

Now, 10 years after his death, an exhibition featuring his creations is making its way around the South and Midwest (it's currently at the Tennessee State Museum in Nashville). Over the phone, the exhibition's curator, Glen C. Davies, told me about his personal connection to Finster -- and discussed the artistic, religious and cultural roots of the reverend's work.

What is your connection to Howard Finster and his work?

The story goes back quite a few years. I believe it was in 1980 that I saw a Life magazine article with a photograph of Finster in his home. Shortly after that, I purchased a book called "Amazing America," by Jane and Michael Stern. It had detailed information about various "outsider" sites, and roadside-America kinds of things, like giant balls of string and artists who made artwork out of their junk. I was very curious. So, as I was coming back from working for the carnival in Florida, I decided I would stop by Finster's home in Pennville, Ga.

I had been always interested in this kind of thing from my background as a student at the Art Institute of Chicago, where they had put a lot of emphasis on this kind of roadside art. I stayed with Finster for a couple of days, and got a tour of the garden, and worked with him in his studio at night. That's where my interest in him began.

The interest for this particular exhibit originated with an exhibit that I had done for the Krannert Art Museum here in Champaign, Ill., which featured the work of a self-taught artist from this community named Robert Bannister. A young man came to see that exhibit, and said that his parents collected outsider art, and that I should come up with the museum's director sometime to see their collection. That led me and the Krannert's director, Kathleen Harleman, to drive up and visit the Arient family, and see their collection. When we saw their collection of Finster's works, the idea for this exhibition came right away.

The Tennessee State Museum is the fifth stop for the show. It began at the Krannert; it then traveled to the Chicago Cultural Center; then it went to Auburn University, the Jule Collins Smith Museum; then it went to the Jacksonville Museum of Contemporary Art in Florida; and then this stop at the Tennessee State Museum. It was just a lucky coincidence I knew this exhibit would coincide with the 10th anniversary of Finster's death in 2001; when I got the dates for Tennessee, I realized it would also coincide with Finster's 95th birthday.

"Outsider art" and "self-taught art" -- what exactly do these terms mean? How is this sort of work generally regarded by people in the art establishment?

"Self-taught art" and "naive art" have obviously been around a long time. They've certainly been championed by artists like Jean Dubuffet all the way back to the early part of the 20th century, leading a lot of people to develop an interest in them over time. Chicago especially became a center for interest in such things. Somewhere along the line, what was originally referred to as "folk art" [needed] a better term; then there was "naive art," and some of those artists took offense at the term "naive"; so then came what we call "outsider art," and "outsider art" had its day. The term is still used, but again, it didn't really cover everything, and many of the artists said, "You know, I'm not an 'outsider' -- I live right here!"

"Self-taught" ultimately became a more popular term for artists such as Finster, who had risen to a level where they were producing a huge amount of work, but had not been initially exposed to anything that was taught in a school or [exhibited in a museum]. As far as the history of self-taught art in the context of American art, I'd say there's been a rising interest -- and certainly, recognition that it's a legitimate art form. I think Finster is a great example of someone whose work came to light at a time when it could become the vanguard of contemporary art. It was shown in New York at the New Museum of American Art; he was in the Venice Biennale; he met and actually influenced certain artists such as Keith Haring and Mark Kostabi -- [not to mention the likes of] Michael Stipe from R.E.M. I mean, R.E.M. filmed the video that went with their single "Radio Free Europe," at Paradise Garden [and Finster created one of the band's album covers, for "Reckoning"] -- so that brought him a lot of exposure to a younger group. Same thing with the album cover that was commissioned by Talking Heads ("Little Creatures"); it got "Album Cover of the Year" in Rolling Stone.

Those things really launched him into the world of popular culture -- and he was not a shy person. He was quick to learn, and had been exposed, in his trips to New York and to Washington and to other cities, to a lot of other contemporary art. It didn't exactly bleed over into his work so much as I think that other artists looked to him and admired [certain techniques he used].

How did Finster's artistic philosophy and his religion connect?

As we try to show in this exhibition, Finster's experience as an artist [began] much earlier than he claimed. He claimed to have seen a perfectly formed human face appear on the end of his finger in paint after painting a bicycle in 1976; then, he said, a strange sensation came over him, and a voice told him to paint sacred art. He said, "I can't; I don't know how to do that." And the voice said again, "Paint sacred art." So he pulled a dollar bill out of his wallet, and [he used it as a model for] his first painting, which was of George Washington. Well, we have work in this show that predates that.

But I think this culmination, in '76, came at a time when he was battling a lot of different things in his own mind about how to break out of the various trades and jobs that he'd been doing to make a living, and try to focus more attention on art. He said shortly after his first vision, he had another vision that told him to paint 5,000 pieces of sacred art. At that point, shortly into 1976, he began numbering each piece. At first, he began [putting] them around the perimeter of his screen door and his house. And after he ran out of room on there, he started using various pieces of board and paper and cardboard and other things; so some of that is on display in this exhibit.

At the end of the 5,000 paintings (and we have the 5,000th painting on display), Finster felt relieved and took a couple of days off. Then he began in earnest to make more works. He continued on all the way to 46,991 pieces, done in just around 25 years.

What led Finster to paint famous figures from pop culture and history -- Elvis Presley, for example?

Well, shortly after visiting Elvis' home in Graceland, he had a vision that Elvis visited him in his garden. In fact, when I went to visit Finster in 1983 for the first time, he told me that a 15-foot-tall Elvis had just visited him the week before. (There's a painting of George and Martha Washington in our show in which, at the very bottom corner, a note says, "This morning from the dead Elvis visited me in my garden," or something like that.) So he was very excited about that vision. See, Finster had a great admiration for inventors. That was one of the things about his garden: It was a garden that was supposed to celebrate the lives of inventors. And he felt that certain inventors, like Henry Ford -- and people like Elvis -- were somehow prophesied, in the Bible. In the case of Elvis, he saw a fellow Southerner, also raised poor, and with a calling. Elvis' music and movies affected so many people, and brought joy to so many people, and Finster similarly felt that he had been touched in some way by God to come and influence millions of people through his artwork and his garden.

Can you describe what it was like working with Finster at Paradise Garden?

Working with him was very unusual. He was always "on" (he slept very little -- maybe four to six hours a day). When you met him, he didn't introduce himself like a regular person would; he would often say, "You're an angel," or, "I know why you're here." He'd have some kind of prophecy, or feel that he knew you. You'd be trying to introduce yourself in a regular fashion, and he would just say, "Come on, we've got a wedding, and let's go sweep out the church." You'd start walking down the road with him, through the garden, on the way to do this job. And he would be talking and preaching and telling about visions. He was always meeting and making friends with people, and that's how he found so many admirers who came and worked in his garden with him, and helped him.

The garden was astounding. I remember I was driving up trying to find it in the town of Pennville, and I couldn't follow the directions based on the information in the article I had. So I stopped and asked some people where "Reverend Finster's sculpture garden" was. They all looked at me like I was crazy. I kept repeating myself. Finally, I said, "You know, it's made out of a lot of junk."

"Oh, that junkyard!" they said. "We know where that crazy minister with the junkyard is." Then they told me it was just a couple of blocks away. They didn't have the context to put it in. And I felt, in a sense, that that was Finster's story: Like a lot of other outsider visionary self-taught artists, he didn't have any context for placing himself in the world of art, so he would use his visions as a way of finding entrée into that world.

Would you say you were at all skeptical of his religious beliefs, or his projects? After having worked with him, would you call yourself a friend or supporter of his?

Well, I definitely count myself as a supporter and friend. I'm not a religious person myself, but I have a great deal of respect for people who have a lot of faith and vision. I think I would be hard-pressed not to be impressed by the amount of work and faith [that went into his projects]. Yes, he may have been a showman, but you cannot deny that his vision never really wavered from the beginning to the end of trying to spread the word.

"Stranger in Paradise: The Works of Reverend Howard Finster" is on display at the Tennessee State Museum, in Nashville, Tenn., through Jan. 15. It will be at the Akron Art Museum in Akron, Ohio, from Feb. 25 through June 3, and then the Telfair Museum of Art/Jepson Center in Savannah, Ga., from June 29 through Aug. 19.