The return of the Radical Chic evening 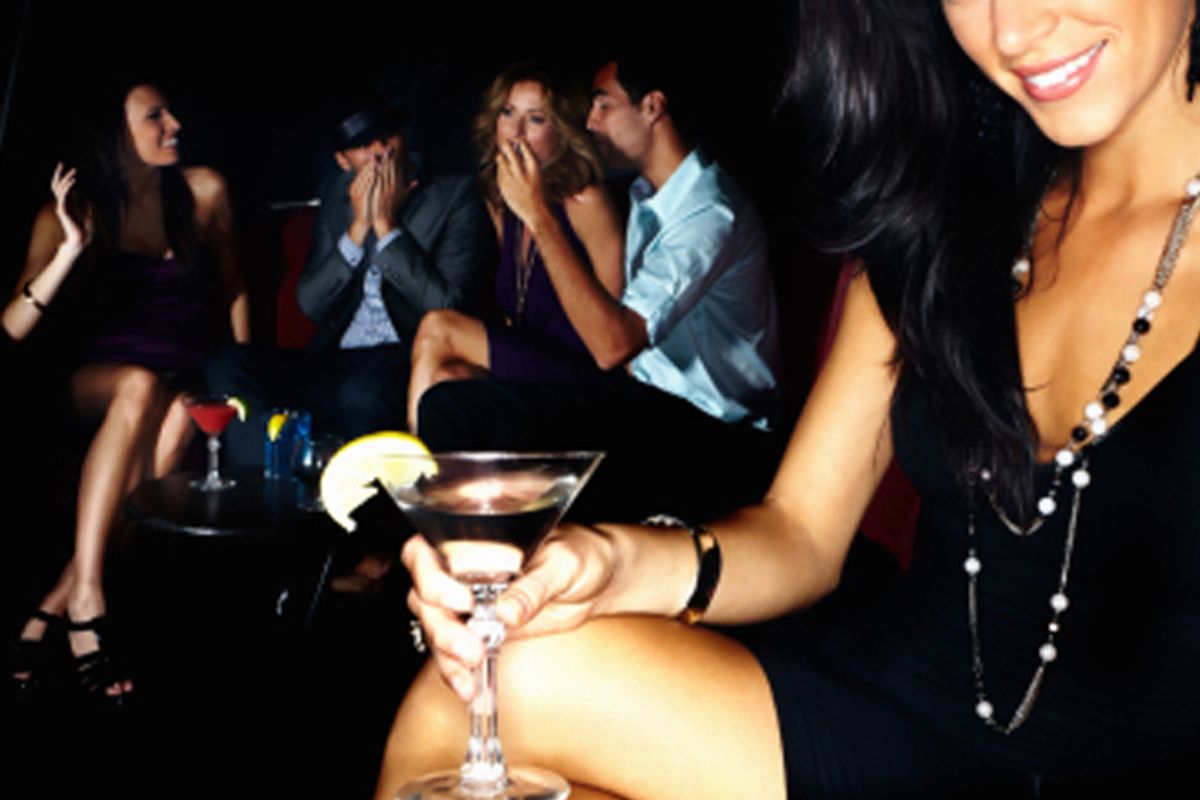 "Whatever the reasons, we're all in the same room, and that's pretty powerful, right? We're participating in a conscientious ... participation."

Penn Badgley, an actor on the hit series "Gossip Girl," has a face too mathematically perfect to be truly interesting, but at this celebrity consciousness-raising gig for Occupy Wall Street, he looks genuinely excited. He bounds onto the stage, grabs the microphone and yells "mic check!" Invited guests from the Occupy movement wince at this earnest misunderstanding of the people's mic and its reworking of the relationship between society and spectacle in an age where politics takes place mostly on television.

In the early days of Zuccotti Park, the people's mic was developed as a solution to the police ban on electric amplification. The order ended up being a gift to the movement, as voices were carried by chanting a speaker's words back to them -- which kept remarks pithy and aware of the audience.

In the chic Bowery Hotel, the formula isn't quite working.

These actors, models, artists, publicity flunkies and those young and well-dressed enough to make their way past the bouncers have spent most of their professional lives learning how to half-listen until it's their turn to half-speak. "My boss just told me to show up," says one of the P.R. girls. It’s as good a reason as any to learn about a new people's movement.

Badgley, Daniel Pinchbeck, Zoe Kravitz and others organized this event in order to raise awareness about the Occupy movement among those in New York society who spend their trust funds in private clubs. A self-consciously scratchy recording of Bob Dylan's "The Times They Are A-Changin' " plays over an exquisite invisible sound system as you walk in, through a forest of helium balloons, to a low-lit hall where people like Alexa Chung and Olivia Wilde make the scene. The room is full of people who won't speak to you until their handlers approve, all of them trying earnestly to understand the profound change that has taken place in the zeitgeist that provides their income.

“The ability to influence media for a person in my position is much greater,” Badgley tells me. “Although arguably I work very closely to the 1 percent.” The Occupy movement seemed like it was doing just fine before the celebrity bandwagon showed up. So what do these people have to gain from association with the first genuine counter-culture to show up in a generation?

The room is also full of people who have spent much of the last three months sleeping outside in the cold, learning how to organize by consensus. Everyone is dressed in grungy black leather, slouchy boots and sweaters, some from thrift stores, some engineered at great expense to look like they come from thrift stores. So it's surprisingly difficult to tell the difference between the actors and the activists until they open their mouths.

“This is like being at a Hollywood party,” says Richard Muhammed, 45, an organizer with Occupy Wall Street. “I appreciate what they’re trying to do, but it really shows you that artists today lack any kind of self-awareness – culturally they’re very vain. If you’re an artist, you should be revolutionary – we just don’t have revolutionary artists anymore.”

In fact, we do, but very few of them get invited to parties at the Bowery Hotel. Around the edges of the Occupy movement, a new generation of creatives is beginning to make art that actually matters. Some of that art can be found daubed on pieces of cardboard and held aloft at marches, some of it is tacked on the walls at radical bookshops or illegally wheat-pasted around major world financial districts. Much of it happens on the Internet, and all of it has a sincere quality that utterly confuses those who, ever since the days of Nirvana, have worked to make abject conformity seem like radical individualism, to prostitute the energy of youth to the wealth of age, and to dress apathy in the drag of iconoclasm. It is because of people like this that the Strokes ever sold a record.

Sincerity is not a valued commodity in a culture that has responded to politics with an ironic shrug since the fall of the Berlin Wall. A woman in her 40s takes the stage to tell a personal story of growing up in poverty in America. She speaks with a visceral honesty that has the audience of actors, models and artists rapt as they sit cross-legged on the floor sipping import beer. Then, after 15 minutes of hearing about how it feels to grow up without health insurance, some of the big-name guests start to get twitchy, wanting the music turned back on so the hamsters in their heads have something to dance to. "This is just so long," says a terribly famous model and presenter, brushing past me. "It's really not OK, is it?" Then she notices me writing down what she's just said. "Don't write that down," she says, a note of worry in a voice used to getting its own way.

For the next half-hour, the terribly famous model and her people look at me funny from across the room. I’ve overheard something I shouldn’t have; the mask of interest in the actual lives of people who are not famous, or at least not in the way these young people understand, is slipping. And I feel a little bad, because there are one or two here who really are trying to learn something.

“It feels like I’ve been waiting for this all my life,” says a young actor working in an off-Broadway show, who has been involved in the Occupy movements for months. “And yes, some people take a while to get it. When I first came here, I didn’t know about the Glass-Steagall act. Well, now I do.”

“There was a lot of eye-rolling when we started talking about this event,” Zoe Kravitz tells me in the smoking area. “There were a lot of people saying – ‘Who wants to listen to a bunch of rich hipsters talk about Occupy Wall Street?’ And that isn’t the answer. Maybe we don’t have an answer, but that isn’t it. So this is a place to check your eye-rolling at the door.” I ask Kravitz what she thinks will bring the real change. She is unequivocal. “Have events like this! Maybe people will show up, maybe people won’t show up, but I think watching people connect on a very human level is the important thing.”

On one level, Kravitz is right: Parties are important. I wonder if, unlike most people here, she knows that a few hours ago in East New York, hundreds of people were dancing to the sound of drums in the freezing winter rain. In the street outside 702 Vermont, about as far away as you can get from the Bowery Hotel while still being in the same city, the symbolic reopening of a foreclosed home for a needy family by occupiers and members of the local community became a block party.

Partygoers laughed and chatted and shared roll-up cigarettes as they went in to make the house habitable for the young family that was due to move in. Local people turned up and handed out homemade brownies; a hundred activists broke away to defend another home against foreclosure after a young man named Quincy told them he was due to be evicted that day. Parties can certainly be revolutionary moments. But not ones where you line up for an hour to pay $10 for a vodka tonic.

A sea-change is taking place in youth culture across the world, a change that largely refuses to be co-opted, monetized or impressed by fame. Many of the people in the Bowery Hotel risk being swept away by the tide of history, and one or two of them almost know it. In a world where the society of the swarm is beginning to devour the society of the spectacle, celebrities have nothing to offer a people’s movement that does not begin with the abnegation of their celebrity.