Updated: To celebrate its return, a brief history of this variety of pundit fantasy writing 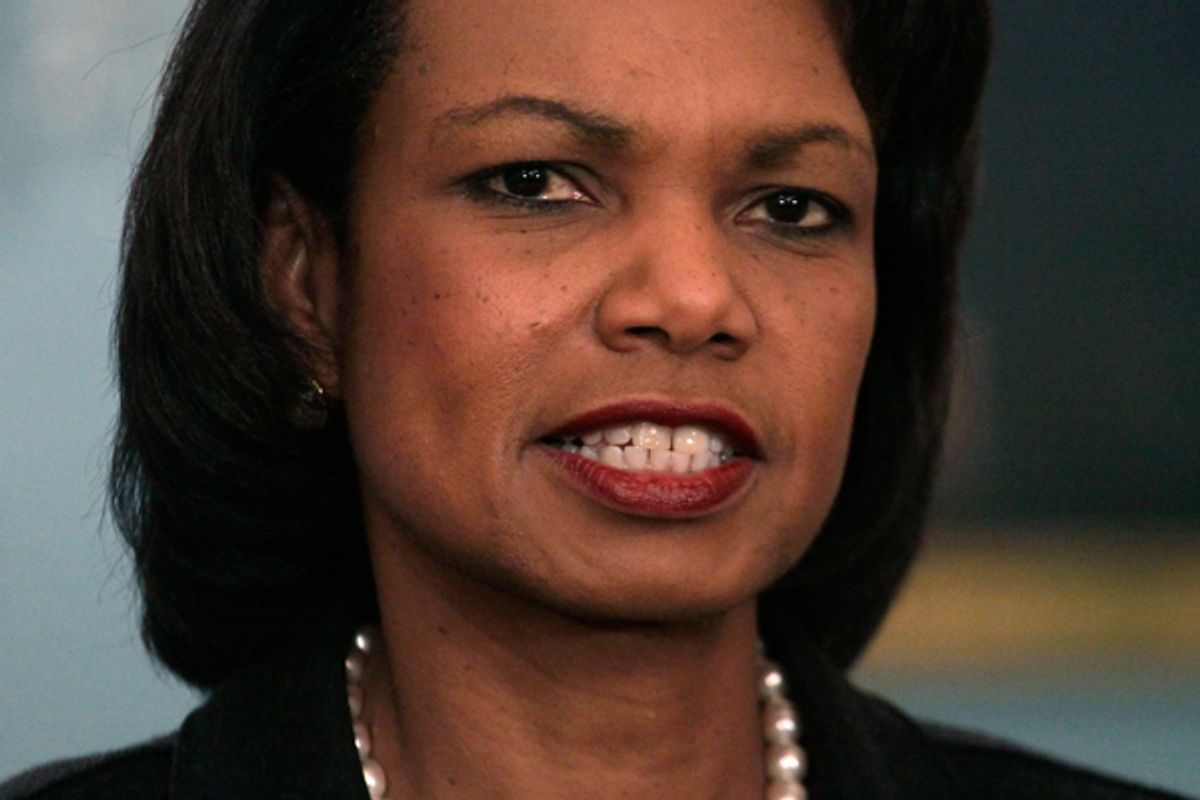 [UPDATED BELOW] Joseph Curl, former White House correspondent for the Washington Times, is bringing me back to the good old days of 2006 in his latest opinion column for the conservative paper. It's a breathless report that Condoleezza Rice will seek the vice presidency, and it's a classic of the genre.

Any amateur can speculate that Chris Christie will enter the presidential race, or posit a Mike Bloomberg third-party run, or imagine Hillary Clinton launching a primary challenge against Barack Obama. After all, those three have actually won elections and expressed political ambitions. It takes a real pro to decide to build buzz around someone who not only hasn't ever run for anything, but who's never expressed a desire to run for anything.

Rice, the national security advisor in George W. Bush's first presidential term and secretary of state in his second, is currently a professor at Stanford with the requisite right-wing think tank fellowship. She has not said or done anything "political" in years. But Curl has been hearing things!

America’s first black female secretary of state is quietly positioning herself to be the top choice of the eventual Republican presidential nominee, ready to deliver bona fide foreign-policy credentials lacking among the candidates. The 56-year-old has recently raised her profile, releasing her memoir in November and embarking on a monthlong book tour.

After 2 1/2 years as a professor at Stanford, Miss Rice is reportedly getting “antsy” to get back into the political game. “She’s ready to go,” said one top source.

Oh, a month-long tour in support of her book about her time in the Bush administration! She must be running for vice president, along with Donald Rumsfeld and Dick Cheney and Scott McClellan and George W. Bush.

There's more. (And not just the part where Curl calls Rice "a spicy Rice dish" and waxes fetishistic about "her guns" being "a match for those of our first lady Michelle Obama.")

Plus, her selection would be a giant chess move to counter the expected replacement of Vice President Joseph R. Biden with Secretary of State Hillary Rodham Clinton. Sure, the White House denies and denies, but that should really make any political watcher more suspicious. One White House insider even told me that the position swap was the only reason Mrs. Clinton joined the administration in the first place.

Curl has so many inside scoops packed into this column! I had no idea that our first presidential running mate swap since Ford's 1976 campaign was basically a foregone conclusion and not just a weird Beltway journalist fantasy! But yes, I can see why the still  un-chosen GOP candidate would definitely be looking pretty closely at Rice -- who's been strongly making the case for her selection by not explicitly denying interest in the position -- in case Obama replaces Biden with Clinton, which he will surely do.

The column gets worse ("Funny thing is, she is, unlike Barack Obama, an 'American black'") but that's not really important. What's important is exploring how someone like Condoleezza Rice ends up a perennial name on the fantasy ticket list.

Rice has been a subject of these columns since 2005, when she became Bush's second secretary of state, and the White House tasked communications operative Jim Wilkinson -- previously known best for inventing the false story of Jessica Lynch* -- with getting Rice (and her boss) some much-needed positive press. Wilkinson did his job beautifully (remember when Rice's knee-high boots were a topic of actual serious news coverage for weeks?) and Rice began receiving the "rock star" treatment.

In the Washington Post, Glenn Kessler, author of the 2007 Rice bio "The Confidante," summarized the exact moment of the birth of the presidential speculation:

In March 2005, before Rice sat for an interview with the Washington Times, Wilkinson slipped a note to the editorial page editor, Tony Blankley, suggesting that she be asked whether she would consider running for president. It was an audacious proposal -- she had been secretary for only six weeks -- but such speculation would bolster Rice's image as a leader. (Wilkinson and Blankley said they do not recall the incident, but others present said they saw Wilkinson's note.)

Shortly thereafter, Dick Morris wrote a book claiming -- nay, insisting -- that 2008 would be "Condi vs. Hillary."

As Iraq descended into a violent civil war in 2006, Rice-for-president buzz bizarrely grew. There was enough of a false grass-roots movement for a paint-by-numbers AP trend piece with a silly nickname and everything. Tim Russert asked her point blank. As always, she said no in no uncertain terms.

Then, of course, everyone began to speculate that she'd be McCain's running mate. Robert Novak claimed as much on Fox. Dan Senor said she was pushing for the pick on some Sunday show. Hendrik Hertzberg wrote a Talk of the Town piece on the subject! McCain and Rice both finally denied "reports" that she was angling for the spot on the ticket.

Now, I guess, it's time to start up the rumor mill anew.

But before you put pen to paper on that column about how a Gingrich-Rice ticket would surely win moderate women in Ohio, consider this: In addition to the fact that she's always denied wanting the job, and in addition to the fact that she was an unmitigated failure in the Bush administration, downplaying terrorism as a priority prior to 9/11 and selling the public on the Iraq invasion with untruths, Condi Rice is pro-choice.

*Update: Jon Krakauer recently rescinded his claim that Wilkinson, then a communications aide to General Tommy Franks, was responsible for the initial false Washington Post report on Lynch's apparent heroics before her capture. Though Wilkinson was obviously involved in the PR campaign surrounding Lynch's rescue and return to the U.S., he apparently isn't responsible for falsifying her actions or leaking that false story to the press.