Everything you need to know about "Tinker Tailor Soldier Spy"

Whether you want a Cold War primer or hope to go deeper into 2011's most acclaimed thriller, this is your guide 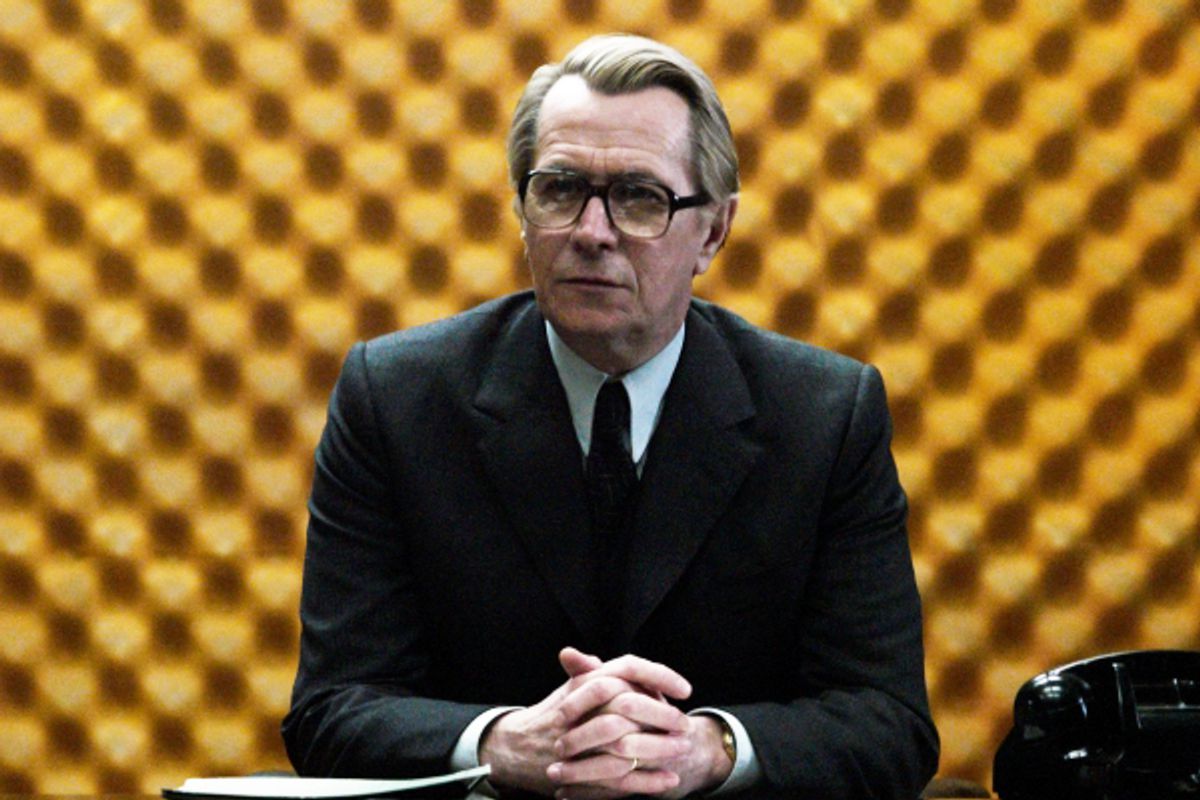 The Circus is MI6, Britain's version of the CIA. "C" is "Control," the murky and mysterious man atop MI6. But what's the best way to keep track of the film's timeline? And what about the shadow cast by Alec Guinness, who played George Smiley in a seven-hour 1979 BBC mini-series.

The new adaptation of John Le Carré's "Tinker Tailor Soldier Spy" is one of the best reviewed films of the Oscar season -- but just as context and information is everything in the spy business, some background makes the film more meaningful as well, whether you're about to see it for the first time or whether you have questions you want to discuss further.

This expert guide will both deepen the film and provide the ultimate cheat sheet. But are we missing any clues? Let us know with a post on Open Salon, and we'll continue to update this list with your best ideas.

John Le Carré is the pseudonym of David John Moore Cornwell. Or is it James David Cornwell? Sources, typically, differ. Either way, John Le Carré (in French, John the Square) is certainly David Cornwell, who was born on October 19, 1931, graduated from Oxford, taught at Eton and worked as a British spy for both MI5 (the section concerned with activities in Britain itself) and MI6 (the bit that deals with affairs abroad.) Then, in 1964, his third novel, "The Spy Who Came In From the Cold," became a smash and he quit to become a full-time writer.

The Figure in the Carpet

Simultaneous with this first success, Le Carré was drawn into, or plunged into, a triangular affair with an older writer, James Kennaway, and Kennaway’s wife Susan. Literary records of the tempestuous and passionate mess that ensued exist in James Kennaway’s novel "Some Gorgeous Accident," in ‘The Kennaway Papers" (a memoir assembled by Susan after her husband’s death in a car crash), and in Le Carré’s "A Naïve and Sentimental Lover," the only of his many novels thus far in which he definitively deserts spies and the clandestine corridors of power.

These days, Le Carré terms "A Naïve and a Sentimental Lover" a "massive embarrassment." The book flopped, but its background provides a codex to the masterpiece that followed -- 1974’s "Tinker, Tailor, Soldier, Spy," an altogether tidier and more designed piece of work, featuring tight love triangles, patterns of deception that, like illicit affairs, require fantastic concentration, and betrayals made all the more heinous by virtue of their intimacy.

Treachery in "Tinker, Tailor" isn’t just about national secrets; it wears the soft suede shoes of a supposed ally and close friend. Here, in this world, the bullet that strikes you between the shoulder blades has been handed to your enemy by that particular person you deludedly most trust.  "Tinker, Tailor" deals with shattered illusions and the foul dreads that float in their wake.  There is, too, a barely submerged gay love story at the core.

Kim Philby, Guy Burgess, Donald Maclean, Anthony Blunt – real men in history who rose high in the British secret services and who, it would turn out, had been working as Soviet agents all along, having been recruited while at Cambridge during the heady leftist days of the 1930s. Their stories, so emblematic of failed imperial promise, continue to obsess the British imagination. Alan Bennett, for instance, has written funny and haunting plays about both Burgess and Blunt.

Le Carré knew Kim Philby, the most effective and dangerous of the spies, and disliked and distrusted him, sensing that Philby had taken a road that might have been dangerously open to him, too. Philby fled to Moscow more than a decade before "Tinker, Tailor" was published, but Anthony Blunt (by then Sir Anthony Blunt, and in charge of the Queen’s art ) was about to be exposed. Luck, then, and historical serendipity, played its part in the success of Le Carré’s novel, which features the hunt for just such a traitor.

In "Tinker, Tailor," Le Carré dubs MI6 ‘The Circus’, and gives its HQ a specific location, in the heart of London’s West End, where Shaftesbury Avenue meets Charing Cross Road, above a shabby shop at the northeast corner of Cambridge Circus. In fact, MI6 is located elsewhere, but Le Carré’s gag was apt. For years, the British secret service really had been little more than had been a circus, born in Cambridge yet Moscow-run.

Moles and Other Lingo

"Tinker, Tailor" is full of insider lore, most notably the word "mole" to describe a long-term spy who has penetrated and still works within an enemy’s secret service. The editors of the Oxford English Dictionary asked Le Carré whether he’d invented this pleasing metaphor. Le Carré replied that he wasn’t sure. In fact, the term dates back to Francis Bacon, who in his "Historie of the Reigne of King Henry the Seventh," published in 1641, wrote: "As for his secret Spialls, which he did employ at home and abroad, by them to discover what Practices and Conspiracies were against him, surely his Case required it: Hee had such Moles perpetually working and casting to undermine him."

Other terms – "lamplighter" (pavement artist), "scalp-hunter" (muscle), "baby-sitter" (minder, bodyguard) – contribute to the sense that Le Carré is taking us deep inside the secret world and knows whereof he speaks. He does, and many of these conceits and usages, which Le Carré did make up himself, have been subsequently adopted by other writers and professional spies.

"Tinker, Tailor" has an intricate structure, befitting the foxy complexities of its subject. The central character, George Smiley, the master spy brought back from his enforced retirement, journeys into a past where the traces have been willfully kicked over. The flashbacks that unfurl within flashbacks, the stories that nestle within stories, can be tricky to follow even on the page. Le Carré has written that he originally started writing about "a solitary and embittered man living alone on a Cornish cliff." The character’s name was Jim Prideaux and he’d been betrayed. Le Carré, dissatisfied with this early draft, took it out into his garden and burned it – such is the diligence of genius. In the final, published version he put the sad and dogged Smiley center stage and made him burrow into a labyrinth. But Jim Prideaux remains the key to the paths that Smiley has to follow. The novel starts with Jim Prideaux in the present, before delving back in time. The new movie starts with Prideaux in the past, on a mission he doesn’t know has been compromised. If the story seems oblique, and the two-hour theatrical version is inevitably more elliptical than the seven hours of television that were made by the BBC in 1979, then remember that what happens and happened to Jim Prideaux is the clue. The narrative fabric begins with him being cut, as it were, and ends with him doing some vengeful chopping of his own.

The story happens in the early 1970s, with the Cold War still freezing away. The U.S.A. stands in one corner, the grim legions of the Soviet Union in the other. Britain, America’s most special ally (or so the Brits still care to think), is desperate to show it still has a role to play. Le Carré’s traitor exploits the anger and puzzlement that burn behind this sense of loss. The whole piece has a dying fall, as if bugles blowing for sad shires accompany Smiley’s every padding footstep.

The news in Britain during the early 1970s was of high unemployment, labor problems and the troubles in Northern Ireland at their bloodiest. "Tinker, Tailor’s" wintry mise-en scene perfectly reflects the era. Smiley wonders through a London of piled-up garbage and shabby misery. "Outside the window the weather continued foul," runs a typical sentence. Tomas Alfredson, the director whose breakout film "Let the Right One In" placed the undead in the freezing greyness of a contemporary Swedish suburb, is thus an inspired choice to render the almost Balkan gloom of Le Carré’s original. And Smiley is a vampire in his own way, a character brought back from professional death to exact justice.

Sir Alec Guinness made Smiley iconic with his 1979 BBC portrayal, in effect wresting the character away from Le Carré, his creator, let alone any future pretender to the part. Guinness constructed a portrayal of elephantine slowness, again and again removing his enormous spectacles and rubbing them on his grubby silk tie before surprisingly fixing his antagonist with a basilisk stare. Gary Oldman, another chameleon of an actor, delivers a performance of different effect. He just breathes, sometimes barely, and yet he too conveys a sense of Smiley’s cool formidableness. Those hidden eyes miss nothing, and the emotion they exhibit is, not disgust at treason, but a wider and more philosophical sadness for the entire human endeavor, the mire and fury that runs through men and women’s veins. Knowledge is the weapon that this character carries, and the burden too. James Bond, obviously, he isn’t. Smiley’s almost a cipher, but Oldman, like Guinness before, gives him a poetry.

Richard Rayner's books include "Los Angeles Without A Map," "The Blue Suit," "The Cloud Sketcher" and "A Bright and Guilty Place: Murder, Corruption and L.A.'s Scandalous Coming of Age." He has written for the New Yorker, The New York Times, Esquire, GQ, The Los Angeles Times and many other publications. He was born in the north of England and attended Cambridge.

Everything You Need To Know About... Tinker Tailor Solider Spy