Finally, the SEC gets serious 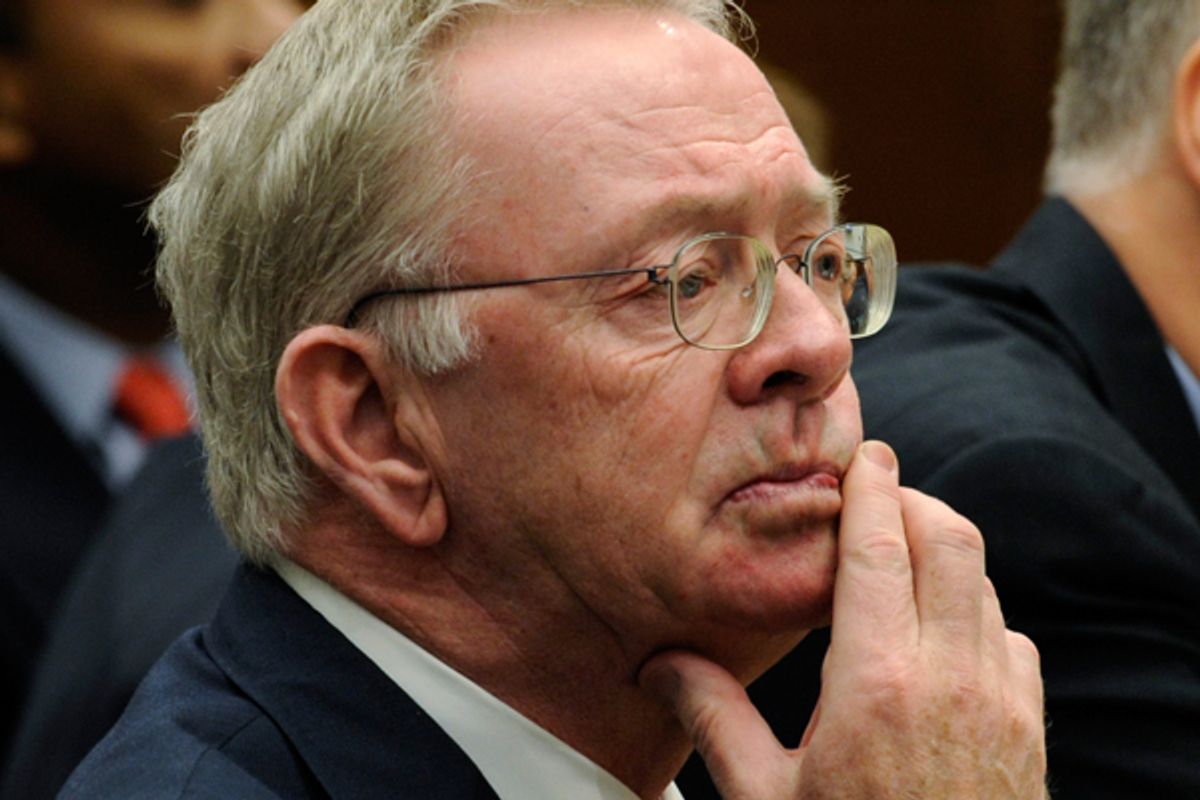 The fraud charges against Syron and other executives of Freddie Mac and the other government-sponsored mortgage-trader, Fannie Mae, who were charged with concealing subprime sludge from their shareholders, will fuel the right-wing narrative of the financial crisis. Rightists contend that Fannie and Freddie, not the banks, were responsible for the financial crisis by monopolizing the market for subprime loans that eventually went bust, dragging down the entire housing market. What this bogus argument ignores is that these two hated government-sponsored enterprises did not actually make loans, but just bought them after they were issued.

But let’s put aside the political hot potato for the moment. My focus is on Dick Syron. And my question to the SEC is this: What took you so long? Syron should have been put on the securities-enforcement hot seat a decade ago, long before he put his mitts on Freddie Mac, whose decision to name him as CEO always baffled me.

Don’t get me wrong. I’ve met Dick Syron. I like the guy. He’s a man’s man kind of character, a real charmer, the kind of guy you’d want to have a beer with, as well as being an economist of considerable repute. “It’s hard to picture Dick Syron as the bad guy,” Boston Globe columnist Steven Syre lamented, in an article titled “Syron’s reputation at odds with charges.”

Steven Syre can’t picture Dick Syron as a bad guy, but I can. Not bad in the sense of somebody who’ll knock you on the head and rummage through your pockets, but bad in the sense of turning a blind eye to what’s happening right under his nose. In other words, precisely the kind of thing for which he was just charged by the SEC.

I spent months in the late 1990s investigating the American Stock Exchange, which he headed from 1994 to 1999. I wrote an article about it in BusinessWeek. At the time, he was about to leave the Amex for greener pastures.

What I found was that the Amex, on Syron’s watch, was a cesspool of price-fixing and outright illegality.  I found that options traders — the Amex was mainly an options exchange — routinely conspired to keep as wide as possible the “spreads” between the prices investors paid and the prices floor traders paid for the same securities. It was a rip-off to the tune of $150 million a year, with every cent of that coming out of the public’s pockets. I found that prominent traders got away with murder, and that self-dealing and conflicts of interest among floor traders were rife.

The Amex pleaded that it didn’t know about any of this stuff, but in September 2000 the SEC ordered the exchange to get its house in order. It didn’t, and in 2007 (regulators are in no hurry when it comes to policing themselves) the SEC brought an action against Syron’s successor, alleging that all kinds of bad stuff took place there through 2004. The Amex was censured. The case was soon forgotten, and the Amex eventually merged with the New York Stock Exchange, where its traders now do their business in a side room off the main floor.

What about Syron, you ask? Not a cross word was said about him. No SEC charges. No nothing. By then he had become CEO of Freddie Mac. See, in regulator-land, doing a mediocre or even, as in Syron’s case, a terrible job is no reason not to get a much better job. At Freddie, where Syron landed in 2003, he was living up to the see-no-evil record that he established years before at the Amex.

In 2004, the New York Times reported, Syron “received a memo from Freddie Mac’s chief risk officer warning him that the firm was financing questionable loans that threatened its financial health.” But what did Freddie Mac expect when they hired Syron? If they had explored his record at the Amex with any kind of depth, they’d have discovered that this was a man who either let the people under him run rampant, or knew about it and didn’t give a damn.

The picture of Syron that emerges from the SEC complaint is entirely consistent with the picture that emerged when I’d talk to traders, clerks and floor brokers on the Amex exchange. They were a blue-collar bunch, mostly nice guys, like Syron. But they had a blind spot, the same kind of blind spot you’d sometimes find among aluminum-siding or muffler salesmen. Maybe what they did wasn’t always the best from the customer’s standpoint. But it was a living.

It was how Dick Syron, the nice guy and economist, made a living. He made a considerably better living than those Amex floor brokers, and he went on to rake in millions when he was in charge of Freddie Mac. For that, he owes a debt of thanks to the SEC, which took 10 years to nail him. He’s probably feeling down today, but he shouldn’t. Overall, I’d say he’s a lucky guy.