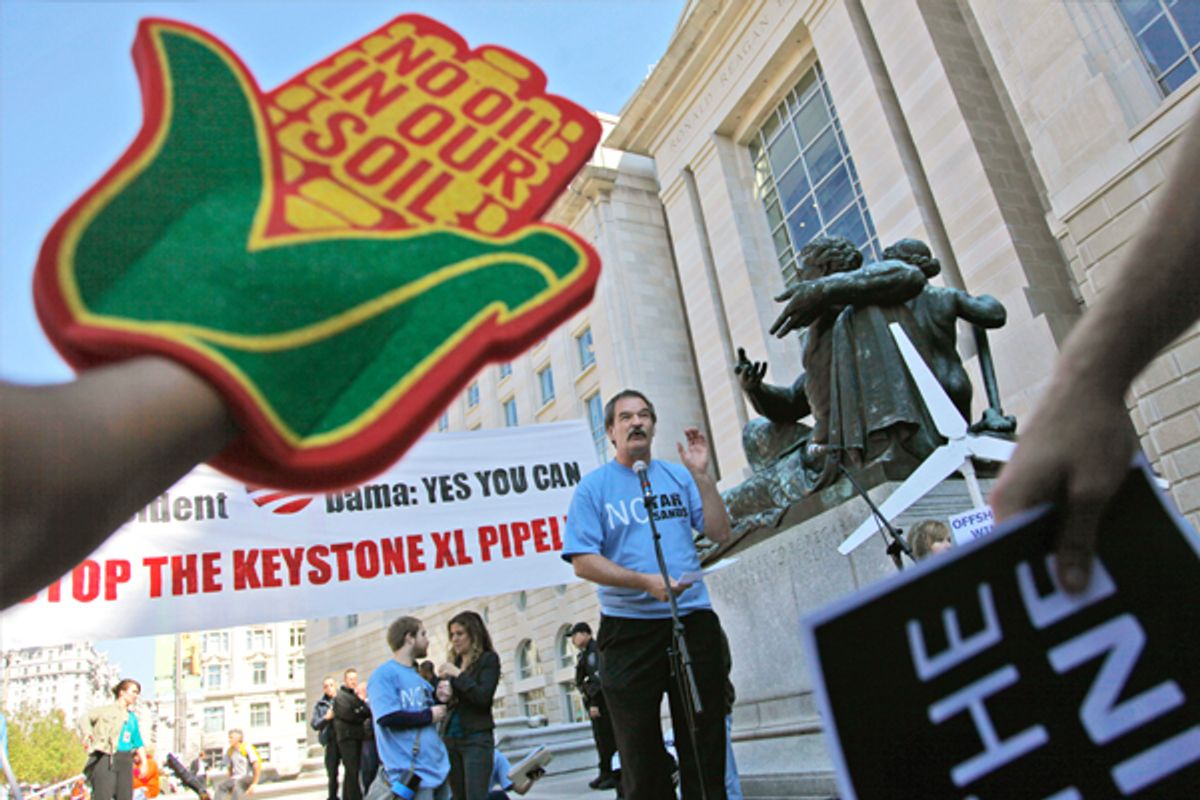 The controversy over the Keystone XL tar sands pipeline intensified Saturday when the Senate voted to approve a bill extending unemployment benefits and the payroll tax holiday that also included a rider that force the president to make a decision on the controversial Keystone pipeline in 60 days instead of allowing for the lengthier review of health and environmental impacts that President Obama mandated last month. But no matter how the tax holiday maneuvering turns out,  the environmental movement has achieved a victory by injecting the issue into the heart of the Washington political debate.

The Republican leadership is seeking to portray the environmental and health review of the Keystone project as a capitulation to fringe interests. Newt Gingrich described the pipeline opponents as “left-wing environmental extremists in San Francisco,” while Mitch McConnell said the president shouldn’t “let a few radical environmentalists stand in the way” of a pipeline Republicans claim would create 20,000 jobs.

That figure is taken from an early economic impact study carried out by TransCanada, the company applying to build the pipeline. But a State Department study estimates that the project would create between 5,000 and 6,000 jobs, while a Cornell University study predicts that construction of the pipeline would create “no more than 2,500-4,650 temporary direct construction jobs for two years.”

While Obama initially indicated he would veto any bill containing extraneous provisions, in recent days the administration has seemed to search for ways to blame Republicans for killing the pipeline without having to follow through on the veto threat. White House Communications Director Dan Pfeiffer said on Twitter last week that “the House bill simply shortens the review process in a way that virtually guarantees that the pipeline will NOT be approved.”

National Economic Council director Gene Sperling echoed Pfeiffer’s statement on CNN’s "State of the Union" Sunday morning, saying the State Department would not approve the pipeline if forced to rush the review. Sperling said State Department experts “made clear before this legislation was even voted on that, if they were only given 60 days to look at alternative routes in Nebraska and do the serious environmental and health reviews, that that would [not] be enough time and would make it almost certainly impossible to extend that permit.”

Some Senate Democrats also claimed that their votes in favor of the bill did not mean they supported the Keystone provision, which they say represents Republican overreach that would backfire. Sen. Barbara Boxer said in a statement immediately after the vote that Republicans had “effectively killed the project” by trying to force it through. By deferring the final decision to State Department experts, Democrats in Congress and the Obama administration are hoping to turn it into an administrative rather than ideological issue.

But some of the groups campaigning against the pipeline argue that the bill offers a chance for the president to take control of the conversation. In the past several days, environmental groups have mobilized supporters to ask the president to veto the bill despite indications that he will sign it. Bill McKibben, a leader of the anti-Keystone movement, said that “the GOP is giving [Obama] the opportunity to stand up for common sense, and against the Newt Gingrich it’s-all-San-Francisco-environmentalists view of the world,” pointing out that Canada has already delayed its own review of a different pipeline carrying tar sands oil to the Pacific for a year in order to more thoroughly study environmental factors.

Said McKibben, “It’s not like Obama’s position is unreasonable in any way.” Daniel Kessler of Tar Sands Action agreed that the pipeline fight presented an opportunity for the president to stand up and “make people aware that this is a climate killer,” arguing that Americans support efforts to move away from fossil fuels and pointing out that Obama won his first term on a platform of strong climate action. Kessler castigated approaches to “politics as a sport,” saying “our leaders owe us the truth.”

Ultimately, though, environmentalists are unlikely to abandon Obama even if he fails to veto a bill containing the Keystone rider. Kessler said that environmental groups recognize that Obama tried to keep the pipeline issue out of the original bill and that president had clearly signaled his intentions to kill it since the provision was included. While they would prefer a strong political stand to the use of administrative tactics, the delay of the pipeline still constitutes a victory for anti-pipeline advocates, Kessler said. “The State Department works for Obama, so it’s the same to us. The important thing is that the permit is denied.”

Indeed, environmental activists are claiming the entire debate around the Keystone pipeline as a victory, pointing out that prior to their campaigns against the project, few people knew about it at all. In a message Friday, McKibben told supporters, “When we started the campaign to stop this pipeline, almost no one had even heard of this thing and now it’s the center of frantic bargaining — that’s a real tribute to your efforts.”

Meanwhile, House Republicans seem poised to reject the Senate bill in today’s vote for reasons unrelated to the pipeline. House Speaker John Boehner told reporters today that the House would vote to reject the Senate’s bill Monday night and seek a new bill that would resolve differences between the House and Senate versions. Boehner maintained that House Republicans are committed to including the Keystone rider in whatever eventually emerges as the final draft of the bill.  In short, the pipeline is not going away as a defining issue between the two parties.