The pointlessness of being a Republican House speaker

2011 wouldn't be complete without another politically damaging revolt from House Republicans, would it? 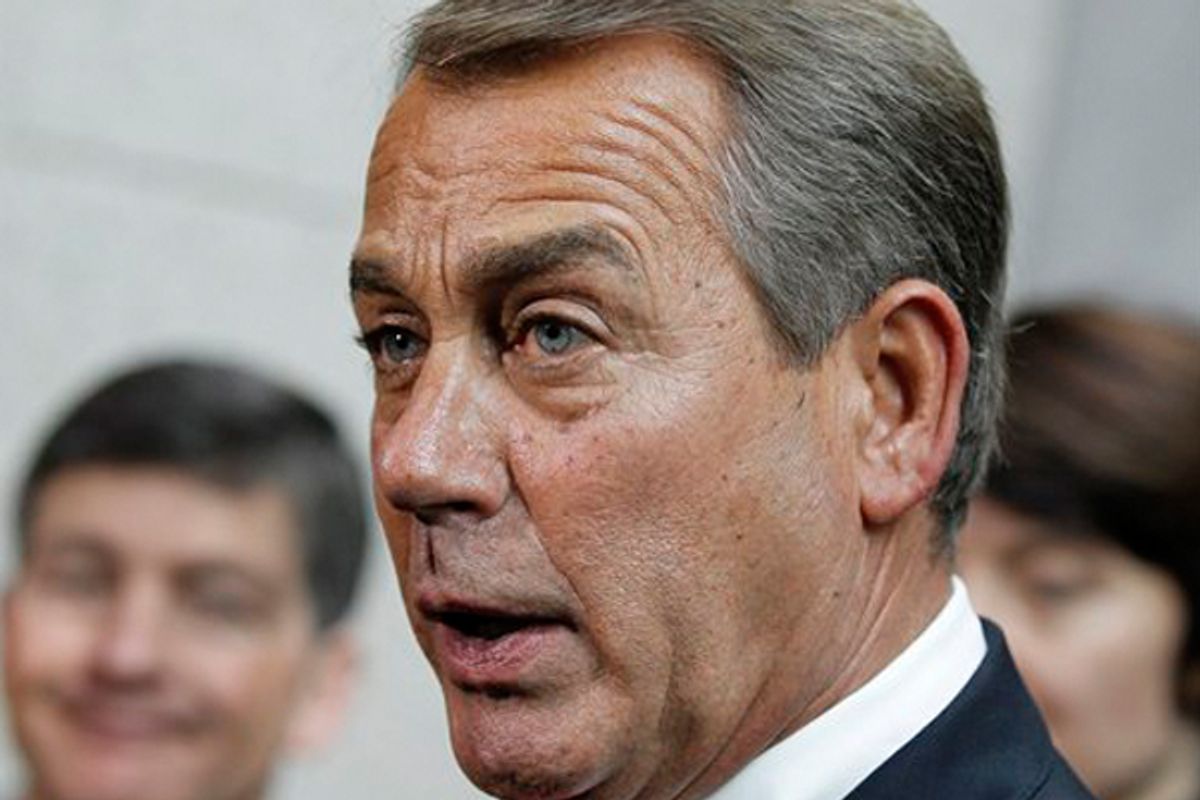 It appears that the House will vote later today on a plan to extend payroll tax cuts for two more months that breezed through the Senate by an 89-10 margin over the weekend. But there's no suspense: Speaker John Boehner even says it's going to fail. So why go ahead with the vote? There are some technical and procedural reasons, but it probably has more to do with an attempt at face-saving on the speaker's part.

The problem for Boehner, as has been amply demonstrated this year, is that he's a speaker who lacks the muscle typically associated with his title. This really isn't his fault. The GOP's House membership can roughly be divided into two groups: 1) Conservative true believers (many of whom won their seats in 2010) who embody the Tea Party's anti-Washington, anti-Obama, anti-compromise absolutism; and 2) conservatives who have some pragmatic instincts but who are terrified of acting on them in the Obama era, lest it prompt a primary challenge from a Tea Party purist.

Now consider what Boehner, an 11-term House incumbent who led the GOP in the lower chamber during the final few years of the Bush presidency, represents to the average Tea Party activist: the exact sort of entrenched D.C. insider who spent the Bush years signing off on W's big government agenda and giving conservatism a bad name, thereby abetting the rise of Obama in 2008. He managed to secure the speaker's gavel for the 112th Congress mainly by being in the right place at the right time, but he's had to wield it with the knowledge that scores of his members (along with the conservative activists and media personalities who have credibility with the Tea Party base) are ready to punish him the minute he sells them out. Add in the presence of an ambitious No. 2 House GOP leader who isn't very fond of Boehner and who enjoys far more trust from the Tea Party crowd, Eric Cantor, and it becomes clear that Boehner is essentially a speaker-in-name-only.

Which makes situations like the payroll tax debate painful to watch. The rate is set to rise to 6.2 percent unless an agreement can be reached by the end of the year, and after some intense posturing, it seemed like one had been struck over the weekend, with Senate Democrats and Republicans voting nearly unanimously to extend it through February and to pay for it with a series of small cuts previously agreed to by both parties during deficit reduction talks. To mollify Republicans, a provision was included to force Obama to decide on the Keystone XL pipeline by February. The deal could hardly have been described as a big win for either side. It was what it was: a way to prevent a tax increase on millions of middle class Americans that neither party wants to be blamed for.

Boehner was well aware of this. Senate Minority Leader Mitch McConnell kept him in the loop as he negotiated with Majority Leader Harry Reid, with Boehner saying then: "If the Senate acts, I’m committed to bringing the House back -- we can do it within 24 hours -- to deal with whatever the Senate does." But when McConnell and Reid struck their deal and the Senate approved it on Saturday, Boehner took part in a conference call with the House's GOP members. According to numerous reports, he started out by calling it a "good" deal and expressing his support. But then Cantor and his allies trashed it, and so did numerous other members on the call. A strong speaker, one who isn't constantly on guard against potential mutinies, might have laid down the law at this point and leaned on his leadership team to twist arms and bring the membership into line. But Boehner was in no position to do that, and he hasn't been all year.

So that was that. By Sunday, Boehner was on television calling the deal unacceptable, vowing that the House GOP wouldn't approve it, and raising the possibility that the tax cuts will expire at the end of the year. Which brings us to today's pointless vote. Asked by Greg Sargent to reconcile Boehner's eagerness to move on a McConnell-Reid deal last week with his new position, Boehner's spokesman claimed there was no inconsistency because the speaker had only said that the House would act on it -- not that the vote would turn out a certain way.

Believe that if you want, but this sure feels like only the latest episode in which Boehner wanted to protect his party from inflicting political damage on itself but had no standing to do so.