A blue Christmas for John Boehner 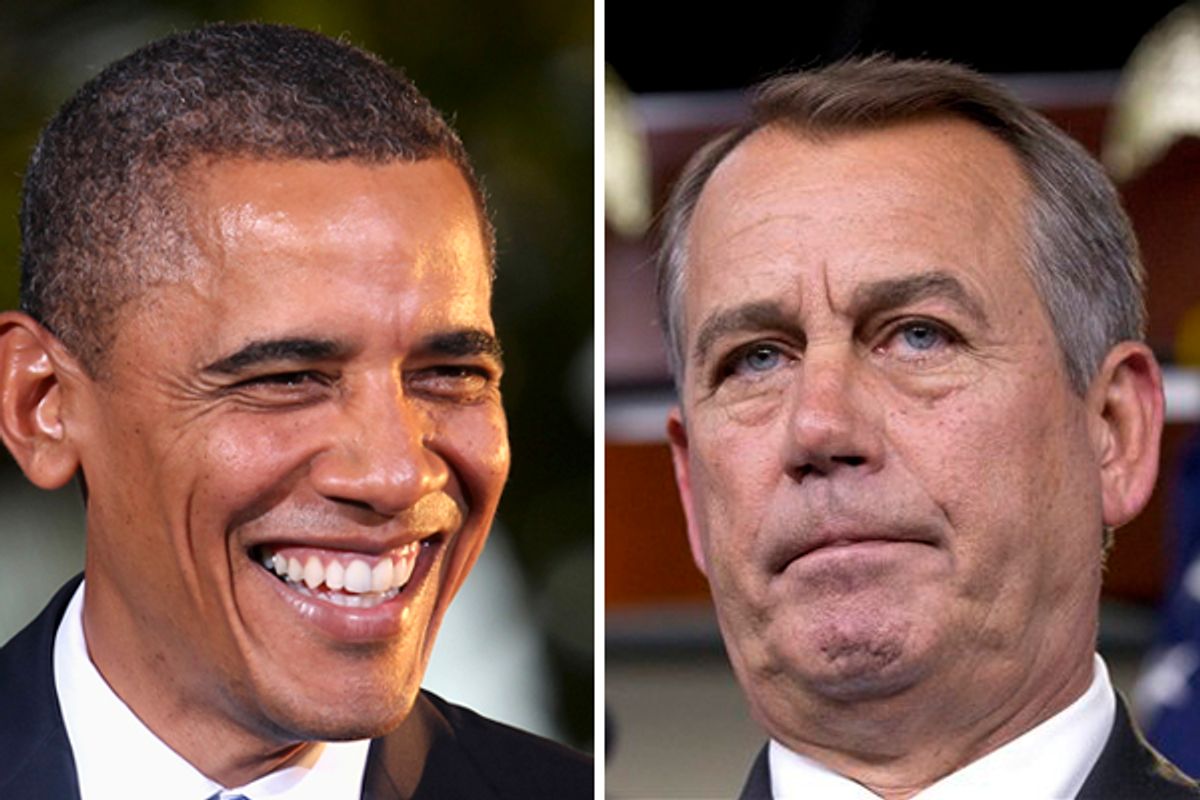 President Obama's poll numbers have been climbing steadily since he stopped compromising in search of a "grand bargain" deficit deal during the summer, and began fighting for jobs. They dropped much of the summer as he struggled to get a deal. At one point, polls showed that a third of independents, and most Democratic-leaning independents, wanted Obama to fight Republicans harder.

He got the message, and it's been good news politically ever since. His strong numbers in the two most recent CNN and ABC/Washington Post polls prove that more Americans realize that it's Republicans who are playing politics with the economy, and who are exclusively serving the interests of the top 1 percent. The climb in Obama's numbers is particularly noteworthy among middle-class and self-described independent voters. Voters now trust the president more than the GOP not only on the issue of jobs, but taxes as well.

Even white men without a college degree, who have been one of the toughest groups for this president to win over, give him higher ratings than they have all year. More than 40 percent approve of the job he's doing, and that number is higher than the share of that demographic group who voted for Obama in 2008. Early this year, only 22 percent of that group approved of the president's job performance, according to a National Journal/Pew Research Center poll.

I've written before about the need to move beyond the charge of racism when analyzing the political views of white working-class and non-college-educated voters. (They aren't precisely the same thing, but they're often pretty close.) No doubt racism is part of the president's difficulty with this demographic group, but that's not the whole story, and it's both incorrect and divisive to insist that's the main explanation. The volatility in this group's views of the president reflects its economic vulnerability at least as much as racial or cultural discomfort, and Obama shouldn't give up on them when shaping his 2012 pitch. He may not win a majority, but he shouldn't settle for the 65-35 drubbing Democrats took in 2010. Democrats are fighting for the working and middle class now.

It's also good news that senior citizens are happier with the president. Of course, John McCain won that group in 2008, and a Republican may win white seniors again in 2012. But Obama's climbing approval rating with seniors – they're now about evenly divided between approval and disapproval – ought to show the importance of standing up for Social Security and Medicare, and the political and moral dangers in continuing to crusade for a deficit "grand bargain" that cuts either program.  Let's hope the president leaves those ideas behind in 2011.

Obama's stern, sober remarks chiding House GOP radicals indicate he knows he has a winning strategy. Unlike last summer, there was no talk about one last compromise. It takes two parties to compromise, and Obama is done compromising with himself.

Woe is John Boehner. What do you call a leader who can't lead? Mr. Speaker, apparently. He'll have a blue Christmas, for sure.  Unfortunately, so will struggling Americans if there isn't a last-minute deal to extend the payroll tax cuts. But Democrats are absolutely right to put an end to compromise at this point. I'll be talking about all these developments on MSNBC's "Politics Nation" with Rev. Al Sharpton at 6 ET.