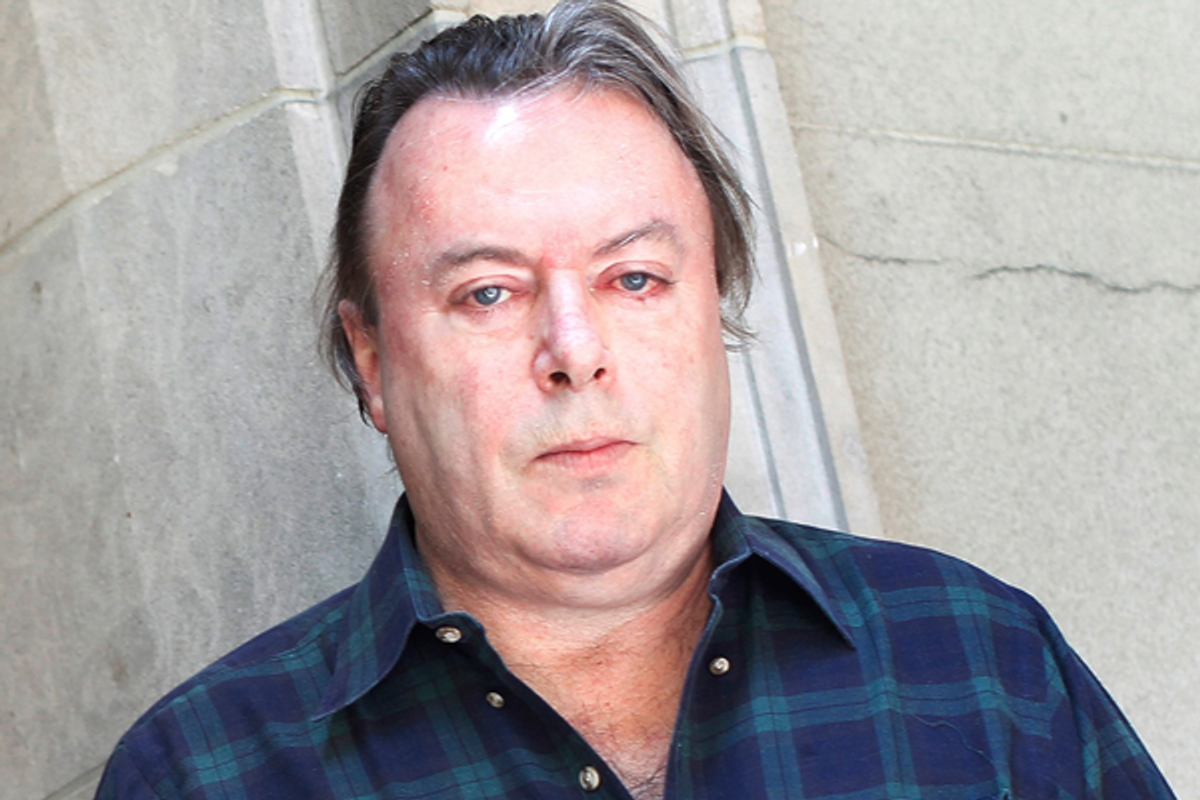 “In lapidary inscriptions a man is not upon oath,” Samuel Johnson remarked. Even so, claims that the world has lost a major thinker and great writer in the late Christopher Hitchens go beyond the mild flattery that is appropriate in obituaries and call for correction. The rule de mortuis nil nisi bonum does not apply to those who take part in public life or public debate; their deaths provide the most appropriate occasions to evaluate their significance and their legacies.

My assessment of Christopher Hitchens is not colored by any personal conflict with him. On the contrary, my few interactions with Hitchens were friendly. In 1995 he wrote a favorable review of my first book, "The Next American Nation," in the New York Times Book Review, and thereafter invited me to drinks at a Washington bar several times. Some claim that he was a fascinating conversationalist, but as I recall he showed no interest in ideas and preferred to peddle gossip about politicians and journalists and authors, until I found opportunities to excuse myself. Gossip, like alcohol, is safely consumed only in small quantities.

He invited me to a dinner at his Washington apartment, where he introduced me to his friend Sidney Blumenthal, the journalist who had become an aide in the Clinton White House. Blumenthal and I discovered that Hitchens was remarkably ignorant of American history for someone who earned money writing about American politics. We spent much of the evening explaining the differences between Whigs and Jacksonians to the British expatriate, and I was not surprised that reviewers found his later book on Tom Paine to be riddled with mistakes. That particular evening ended with Hitchens cornering me at the door on the way out with a boozy harangue about how he was going to come to the defense of David Irving, a right-wing British author who had been denounced as a Holocaust denier. I was grateful to escape.

When, soon afterward, as part of his self-publicizing campaign to save America from Bill Clinton during the impeachment crisis, Hitchens collaborated with Ken Starr and the Republicans in an effort to destroy his former friend Sid Blumenthal, I ceased to hear from him, perhaps because he correctly assumed that I thought his actions were deplorable. The last time I saw him was in New York about a decade ago. We were together on a panel at the New School and he muttered comments in order to attract attention to himself whenever another panelist was speaking.

Several years ago, a readers’ poll done as a joint publicity stunt by Foreign Policy and London’s Prospect Magazine elevated Christopher Hitchens to the title of the world’s leading intellectual. The poll was not only silly but also easily gamed, and in a succeeding year, thanks to votes by conservative Muslims, with wonderful irony, a Turkish Muslim cleric succeeded Hitchens as the world’s leading public intellectual.

But though he played one on TV, Hitchens was not an intellectual, if the word has any meaning anymore. Those known by the somewhat awkward term “public intellectuals” can be based in the professoriate, the nonprofit sector, or journalism. They can even be politicians, like the late Daniel Patrick Moynihan. But genuine intellectuals, as distinct from mere commentators or TV talking heads, need to meet two tests.

First, intellectuals need to produce some substantial works of scholarship, literature or rigorous reporting, distinct from the public affairs commentary for which they may be best known to a broad public. If you do nothing but review other people’s work or write brief columns or blog posts, it is easy to appear to be much smarter and erudite than you really are.

Second, genuine intellectuals base their interventions in public debate on the basis of some coherent view of the world. A dedication to rigorous and systematic reasoning, wherever it may lead, is what distinguishes intellectuals from lobbyists or partisan spin doctors who change their views according to the demands of a special interest or a party. It also distinguishes them from mere “contrarians” — the term Hitchens used to describe himself — who attract publicity by taking controversial stands according to their whims.

Hitchens left behind no substantial scholarly or literary work, and if he had any core principles or values they are hard to discern. He denounced the Gulf War and backed the Iraq War; he supported Bush, Cheney, Rumsfeld and Wolfowitz while continuing to insist that Henry Kissinger was a war criminal.

If he was not really an intellectual, then what was Christopher Hitchens? A decade ago, a British diplomat told me that he was astonished at the reputation Hitchens had attained in the U.S.: “In Britain we think of him as a gossip columnist.”

Quite so (as the British might say). He had more in common with Walter Winchell than with Walter Lippmann. A gossip columnist of genius, Hitchens escaped from the ghetto of little-known leftist writers when he discovered that he could become a celebrity by denouncing bigger celebrities. That strategy for self-promotion, in my opinion, explains his over-the-top attacks on Henry Kissinger, Mother Teresa, Princess Diana and Bill Clinton (Michael Jackson and Lady Gaga were spared the Hitchens treatment). When Princess Di and Mother Teresa died within a week of each other in 1997, I remarked to a friend, “I wonder what celebrity Hitchens will make a career out of denouncing now?” We soon found out: Bill Clinton and the biggest celebrity of all, God.

Were the ad hominem diatribes that Hitchens specialized in evidence of his moral integrity and political courage? On the contrary, TV producers and magazine editors love sensational trash talk about media “personalities,” including Jehovah. The philippics of Hitchens were calculated and successful career moves by a gifted publicity hound who spent the last part of his career, appropriately, at Vanity Fair, a magazine best known for models and actors on its covers.

Nothing could have been safer and less iconoclastic than for Hitchens, while on the left, to call Kissinger a war criminal, or, as a newly minted neoconservative, to smear critics of the Iraq War as appeasers of “Islamofascism,” a propaganda term used by the likes of Ann Coulter and David Horowitz. While Hitchens joined the American establishment in rallying behind George W. Bush, those of us who denounced the Iraq War from the beginning were an unpopular minority in Washington’s media and foreign policy circles, dominated as they were (and are) by neoconservatives, liberal imperialists and cowardly careerists with their fingers to the wind.

Hitchens was affirming rather than challenging an elite consensus when, on behalf of atheism, he mocked religious believers as not merely mistaken but contemptible and moronic. The religious are despised and dreaded by upscale Americans, and their British court jester could say what they dare not say themselves — although candidate Barack Obama came close in 2008, when he psychoanalyzed the white working class for the benefit of billionaire donors behind closed doors: “And it's not surprising then they get bitter, they cling to guns or religion or antipathy to people who aren't like them or anti-immigrant sentiment or anti-trade sentiment as a way to explain their frustrations."

In recent years Hitchens managed to enlarge his celebrity among the college-credentialed lumpenintelligentsia by means of appearances on TV chat shows and the blimpish bellicosity that he brought to the cause of “the new atheism.” But what was so peculiar about his reputation was the extent to which it remained a secondary, derivative fame. To judge from interviews published now and then in middlebrow magazines, which I always read, when I found them, in the hope of learning why anyone would think that he was significant enough to be interviewed, Hitchens was famous for criticizing famous people and for being a friend of other famous people, including Salman Rushdie and the British novelist Martin Amis. He had it both ways in the cases of Gore Vidal and Edward Said, boasting for years of their friendship and then publicly sliming them—or so I gathered from the interviews. I find this sort of thing tedious, but evidently there is a market among editors and journalists for such backstage gossip, a market that was exploited by the master of the shared rumor and the vicious putdown.

The smarmy expatriate British journalist Peter Fallow in Tom Wolfe’s "Bonfire of the Vanities" is sometimes alleged to have been based on Hitchens, but others claim that the model was a certain Anthony Haden-Guest. The truth is that there have always been many Peter Fallows in Washington, New York and Los Angeles, from Malcolm Muggeridge a few decades ago to Niall Ferguson today. Most of these, even if they began their careers on the radical left, end up playing the stock character of the harrumphing Tory in their second careers in America. What the British comedian Michael Palin said of Muggeridge, who like Hitchens started on the left and ended on the right, applies to this type as a whole: “He was just being Muggeridge, preferring to have a very strong contrary opinion as opposed to none at all."

A classic example of the Peter Fallow type is the now-forgotten Henry Fairlie. When I first came to Washington in the 1980s, Fairlie filled the role of snarky British pundit in D.C. that Hitchens later assumed with much greater success. In 2009 Hitchens wrote about him in the New York Times Book Review with a snide condescension that, coming from Hitchens, passed for generosity:

Henry’s closing years were not delightful ones: He ended up quasi-homeless and moved into the offices of The New Republic as an alternative to sleeping rough. He became a shameless borrower of money and unwelcome even in the less fastidious bars around Dupont Circle. I myself think that this indigence was the cause of some of his less admirable journalism: he had to cudgel phony opinions out of his weakening brain and frame in order to finance the next bender. Having partly succeeded him as the Washington correspondent of The Spectator, I caught him out making a slanderous allegation in print that was backed up, when challenged, only by an unimpressive piece of bluffing and blustering. Not long after that, in 1990, before we could even have a reconciling cocktail — and just after he had written an essay (reprinted here) that stole my idea for a satire of those who asked for Perrier water in bars only to demand a handful of Potomac water, in the form of ice cubes, to go with it — he took a bad tumble on his way back to his office/home and died, with distressing celerity, at 66. In the lives of many younger journalists, he had managed to fulfill the two great tutorial roles of enviable example and awful warning.

Christopher Hitchens wanted to be remembered as his generation’s George Orwell. But he was only its Henry Fairlie.