Was Iraq "worth it"? 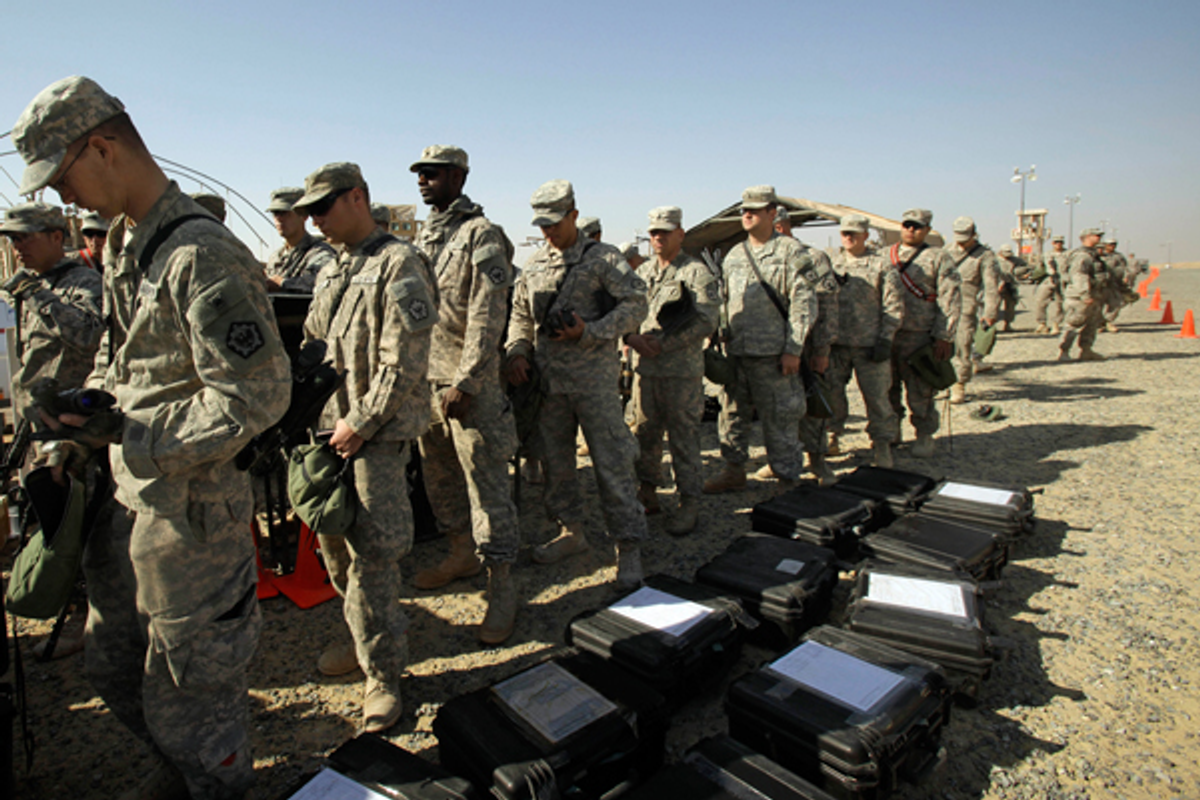 With the American occupation of Iraq officially coming to a close this week (and I stress "officially" because it's not actually ending), so begins the psychological battle for the memory of that military adventure. Just as the post-Vietnam period saw a sustained campaign by militarists to revise the history of that war and manufacture politicized stories about why it went badly -- the 1980s told us it was lost because troops supposedly got spit on, politicians supposedly micromanaged the war, not because the war was a bad idea -- the same militarists will seek to change our recollection of the Iraq adventure, so as to make sure a future adventure (perhaps against Iran) will be politically possible.

This will all undoubtedly play out in the crucible of the 2012 presidential campaign, where the foreign-policy gotcha question will be whether the candidates believe the war was "worth it." Already, leaders of both parties are breaking out the "in vain" cliche, reassuring America that its soldiers did not die as such. Yes, the crusade to reimagine the Iraq War is on -- and with it comes a demand for us to suspend our disbelief. In the real-time myth-making, we are being asked to view the invasion's success through the prism of Saddam Hussein's death and fragile Iraqi self-governance, as if those objectives, rather than phantom WMD and supposed imminent threats, were the stated mission justifying such a huge expenditure of blood and treasure.

Such hagiography and post-facto revision aside, the only empirical way to determine whether Iraq was "worth it" -- and thus, have a clue as to whether future adventurist invasions are worth it -- is to perform some kind of cost-benefit analysis.

This wouldn't be all that difficult to do since our government is already fond of subjecting complex programs to such review. Indeed, federal agencies' cost-benefit analyses are so meticulous -- and merciless -- that they actually put prices on American lives (for instance, the EPA uses $9 million per life while the FDA uses $7.9 million). That kind of reductionism is not a partisan issue -- it's a matter of transpartisan consensus in Washington, as presidents of both parties regularly install cost-benefit ideologues into top rule-making positions in government (for example, the White House's powerful Office of Information and Regulatory Affairs was headed by cost-benefit acolyte John Graham under President Bush, and is now headed by cost-benefit fetishist Cass Sunstein under President Obama).

Considering this, such retrospective scrutiny looking at past wars, or prospective scrutiny looking at future ones, would be a relatively simple proposition. Thanks to Iraq and Afghanistan, we have a basic sense of how many lives are lost and how much cash is spent in a given invasion. For those who insist those wars could result in big costs from terrorist retaliation, we now have a decade's worth of terrorism statistics during our post-9/11 wars to judge those potential costs, too. Additionally, our intelligence experts can likely estimate how many terrorist attacks we may have thwarted because of such wars. And they can estimate the possible future costs in retaliation and anti-Americanism of drone strikes that, according to the Brookings Institution, kill 10 innocent civilians for every one alleged militant.

But as straightforward as such cost-benefit analyses of war would be, and as much as they might tell us about whether waging war is the right call, there's a catch: While our government is quick to subject domestic and non-military priorities to dollars-and-cents scrutiny, that same government all but refuses to subject militarism to the same scrutiny. Indeed, the idea of actually trying to answer the simple "worth it" question about war through a cost-benefit analysis is now considered so radical -- so unthinkable -- in Washington, that President Bush's chief economic advisor, Lawrence Lindsey, set off a major firestorm when he dared to even ponder a reporter's hypothetical question about it.

Why the double standard between domestic programs and military affairs? Because like so many seemingly apolitical policy instruments in Washington today, cost-benefit analyses are primarily used as cudgels exclusively against middle-class programs, rather than employed as a dispassionate means of judging the worth of all initiatives. Put another way, cost-benefit analyses are selectively deployed against -- or distorted to kill -- programs that threaten powerful corporate interests, but they are often nowhere to be found when they might undermine those interests.

Two examples in 2011 highlight this reality.

One happened earlier this year, when Republicans blocked voluntary Federal Trade Commission guidelines to curb junk-food marketing aimed at kids. As recounted by the New York Times' Mark Bittman, Missouri Republican Rep. Jo Ann Emerson -- who has taken big campaign contributions from PepsiCo, the American Beverage Association and the National Restaurant Association -- "inserted language into an appropriations bill that would prohibit the F.T.C. from submitting a final draft of the guidelines before completing a full cost-benefit analysis." Emerson and her corporate allies obviously believe the cost-benefit analysis will kill the guidelines, because they know the government's analyses are sufficiently tilted toward overestimating business costs and underestimating societal benefits.

Then came news of the Obama administration politicizing and distorting cost-benefit concerns in killing EPA smog rules. As the New York Times reported, in pushing to enact the rules, EPA administrator Lisa Jackson worked up "a 500-page package with a detailed cost-benefit analysis" showing that "as many as 7,200 deaths, 11,000 emergency room visits and 38,000 acute cases of asthma would be avoided each year." But when she brought that analysis to former JPMorgan executive-turned-White House chief of staff Bill Daley, he "sens(ed) uproar from business" and then engaged in his own ad hoc cost-benefit scrutiny, "sharply question(ing) the costs and burdens" of the rule on industry. Eventually, he sided with the lobbyists at the U.S. Chamber of Commerce, who convinced him to ignore "the lung thing, the asthma thing and the kids’ health thing" and kill the rules because "your boss is up for re-election next year."

No doubt, pointing such a powerful, program-killing weapon at the bloated Pentagon budget might sound great to those who oppose our military adventurism. And there's no doubt America would benefit from -- or at least be better informed by -- a sober cost-benefit analysis of our current state of Permanent War. But that's precisely why we don't get such an analysis on military matters -- because it might bring an end to the very adventures and wars that continue to generate such largess for the Military-Industrial Complex.