Convicted for words, not deeds 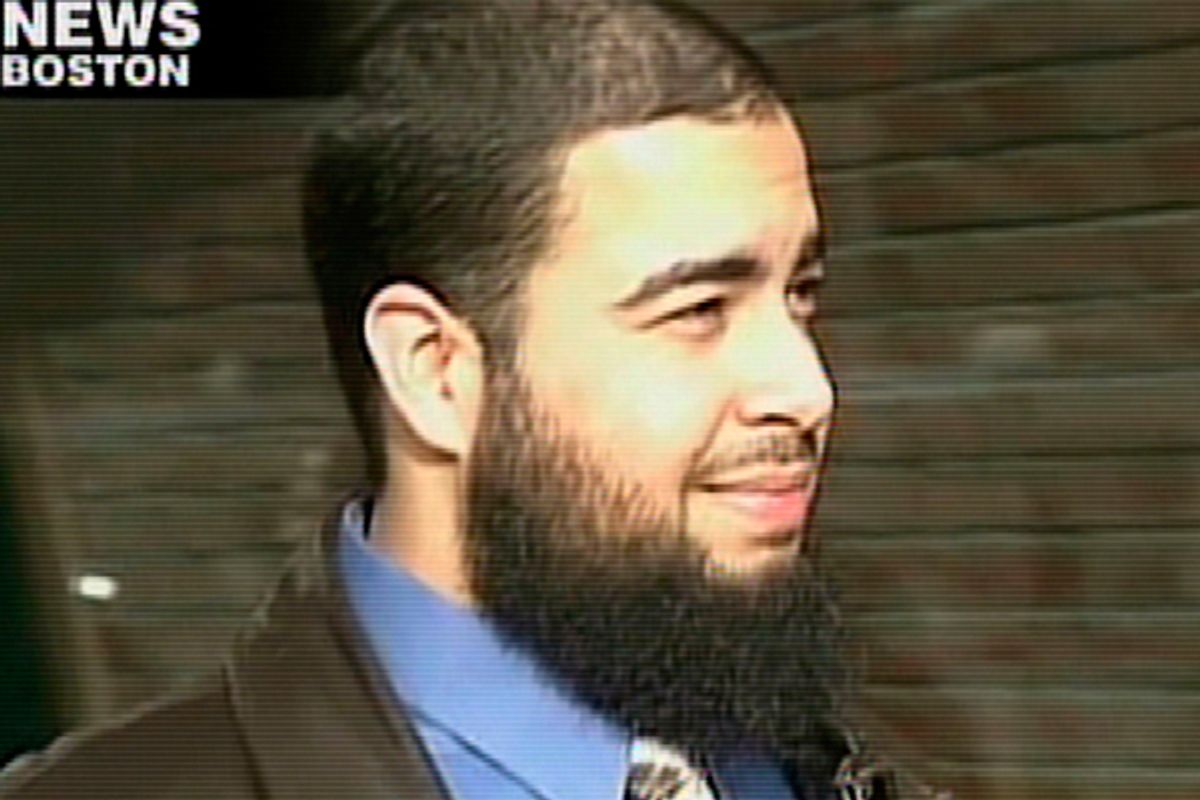 BOSTON -- Call it “the week that was” when it comes to shredding the Constitution. First the Senate passes a rider to the defense bill that would make it legal for the military to arrest American citizens anywhere in the world, including U.S. soil, at the whim of the executive branch — this or any future executive branch.

Then comes the conviction yesterday of a Massachusetts man for viewing and translating jihadi videos online. The eight-week trial featured starkly contrasting portrayals of the bearded Muslim, Tarek Mehanna, a Sudbury, Mass., fundamentalist who traveled to Yemen and has made no secret of his contempt for U.S. foreign policy.

His Boston legal team haloed him as a kind and loving man, if an angry and opinionated intellectual type. They argued he was being persecuted for his disapproval of  U.S. foreign policy. The government countered with the belief that Mehanna was just the sort of hater who’d take glee in seeing Americans getting gunned down in bloody shopping malls.

American Muslims took it on the chin big-time this week, between the Mehanna case, the more troubling rider to the 2012 National Defense Authorization Act now waiting for the president’s signature, to say nothing of home improvement chain Lowe's yanking sponsorship of the "All American Muslim" show on TLC.  If the president signs the defense bill unamended, it will represent the single biggest civil liberties betrayal of his presidency.

The implications are profound and simple.

“They both came out the same week, but they are part of a pattern of putting to one side the fundamental freedoms we’ve taken for granted. We’re into a whole new legal terrain," said Nancy Murray of the Massachusetts chapter of the American Civil Liberties Union. "As the Senate gutted the Bill of Rights, just as it gutted the right to due process and the right to trial by jury, the whole notion of presumption of innocence goes out the window. And the scary thing is that it could be applied to all U.S. citizens."

When not watching Lowe's ads on the popular reality show, Muslim parents are sure to hit the pause button for a quiet word with their children about expressing strident opinions online. And they won't mean maybe, either, because sentencing for Mehanna is set for as soon as April 12, and he may never see the light of day again -- he could be sentenced to life in prison.  The message is unequivocal: You’d better watch your Muslim mouth.

Mehanna made no bones about watching jihadi videos and translating them for friends; no bones about lending CDs to people in the Boston area in order, as the prosecution asserted, to create like­-minded youth; no bones about  discussing with friends his views of suicide bombings, the killing of civilians, and dying on the battlefield in the name of Allah. He translated texts that were freely available online and looked for information there about the 19 9/11 hijackers too. He even inquired into how to transfer files from one computer to another, and how to keep those files from being hacked.

However unpopular those acts may be, civil libertarians say they fall well within the margins of First Amendment protection. They are bracing themselves for repeal, but their immediate concern is the ending of posse comitatus, a far more serious matter. If the president, a constitutional scholar, signs the Senate-passed defense bill as is, then in the stroke of a pen he’ll have re-answered the age-old joke: "Is this a free country, or what?" The answer will be a resounding "or what," but it's no joke. Coming on the same week that the Bill of Rights had its 220th anniversary, you have to ask what's more depleted these days: America's outrage or its unkeen sense of irony?

The ACLU of Massachusetts submitted a brief in the Mehanna case, but it was refused by Judge O'Toole, who felt it was not suitable for this trial. The amicus curiae urged the court to proceed with the utmost care to prevent protected speech from constituting the sole basis for charges of conspiring to provide material support to terrorist groups. The brief said Mehanna had “engaged in discussions and watched and translated readily available media on the topics of global politics, wars, and religion, all of which are topics of public concern. That his views may be offensive or disagreeable, or that they may ‘create like-minded youth,’ is of no consequence to the heightened protection to which his expression is entitled as a result of the First Amendment.”

Through such acts Mehanna was convicted yesterday of conspiracy to provide material support to al-Qaida. If such speech is not protected as a free expression under the First Amendment, “then the government’s implicit view that such speech could alone support conviction threatens to render the material support statute a vehicle for the suppression of unpopular ideas, contrary to the dictates of the First Amendment and fundamental American values.”

Civil liberties advocates make the "slippery slope" argument. In the 2010 case Holder v. Humanitarian Law Project, which decided whether providing nonviolent aid like legal advice to terrorist groups constitutes material support for terrorism, the Supreme Court ruled that you can advocate as an individual, but if your advocacy is coordinated with an outfit on a terrorist list, then it’s criminal conspiracy and you can be convicted of giving terrorist support.

The ACLU believes that Mehanna’s activities were not shown to meet that test, "so the real reason for convicting him seems to be missing," Murray said. "The trial featured all sorts of allegations of traveling but there was no hard proof that his advocacy was coordinated with a group."

Grounds for appeal appear to be more than ample. “For one thing," said Murray, "the courts should be very worried that it criminalizes unpopular speech. The First Amendment should’ve protected his translating material that he read on the internet. Unless they could've said he was doing that at the behest of a terrorist group, they’ve never actually made that direct connection.”