Ex-AIPAC flack in war of words with biz partner 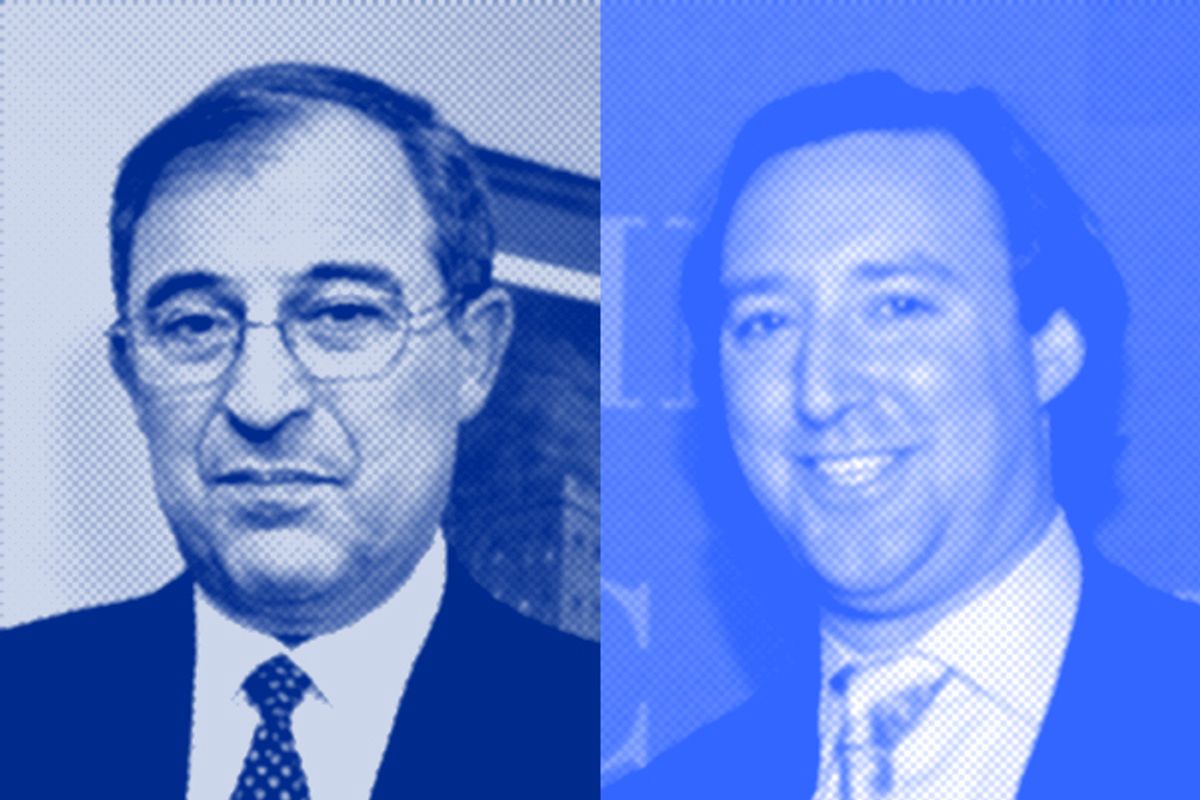 Here's a coda to the back-and-forth this month involving former AIPAC spokesman Josh Block, accusations of anti-Semitism, and the Democratic-oriented think tank the Center for American Progress.

The episode, which I covered here (and Glenn Greenwald covered here), has now turned into a public war of words between Block and his business partner, Democratic lobbyist Lanny Davis. Davis has accused Block of "loose language and mischaracterizations," while Block has countered that Davis' accusations are baseless and added that "seeing him ... say those things saddens me."

Warning: This gets into the weeds, but it's notable because at heart this episode is about serious charges of anti-Semitism and people who wield a lot of influence in Washington, particularly in the area of U.S. policy toward Israel-Palestine.

The latest installment of the story began with Lanny Davis giving an interview to ThinkProgress in which he rejected accusations of anti-Semitism made by Block against various progressives who write about Israel.  (As I reported, Block was shopping a large file of opposition research against those writers on a now-defunct neoconservative listerv called "The Freedom Community.")

"I respect Josh Block but I 100 percent disagree with much of his language. People can disagree about Israel’s policies without being anti-Semites. In fact I think it’s a terrible mistake to blur the two. We should be able to debate Israel’s policies. ... Impugning motives of people at the Center [for American Progress] and impugning [that] those motives are driven by anti-Semitism is, in my opinion, wrong."

On Monday, 10 days after the ThinkProgress interview, Davis wrote a blog post at the Hill complaining that ThinkProgress had "wrongly accused" him of supporting the 2008 Honduran coup as well as the dictator of Ivory Coast, Laurent Gbagbo. In fact, the ThinkProgress post had correctly characterized Davis' work for pro-coup forces in Honduras and the Gbagbo regime in Ivory Coast.

In the Hill post, Davis also elaborated on his anti-Semitism remarks, asserting that the term "Israel Firster" by a CAP blogger on Twitter is "a classic anti-Semitic phrase." (The blogger in question has since apologized, and others argue the phrase is not anti-Semitic, but rather, in some cases, accurate. That appears to be all that's left of the original accusations of anti-Semitism leveled against CAP.)

Several hours after the Hill post went up, Davis added an update angrily accusing Block of twisting his words while promoting the piece:

Today Josh Block misstated and mischaracterized what I wrote in this blog. He headlined my piece pertaining to him and apparently sent this distorted version of what I wrote and intended to his mailing list:

"Lanny Davis: CAP sandbagged me; Josh Block is right — CAP needs to clean up its act."

This is the kind of loose language and mischaracterizations that gets Block into difficulty. ...

I resent his attempt to put words in my mouth, words I did not use or not mean.

Asked to respond to Davis' accusations, Block defended his characterization of Davis' piece in an email to Salon:

Reading his full item clearly makes my point, as he writes, Eli Clifton sand-bagged and "surprised" him writing a "misleading item", that Lanny "agrees with [me]" that "These words were clearly anti-Semitic,” and he calls on CAP to exercise "adult supervision" over  "the 'children' who write for CAP blogs, who prefer name-calling and extreme personal characterizations to checking their facts and basing their opinions on confirmed facts."  Seeing him contradict himself again and say those things saddens me, and I can't explain it.

Asked about this, Davis countered by providing me with an apology email he says Block wrote to Block's mailing list Monday night, in which Block acknowledges he "paraphrased Lanny's op ed inaccurately." Read that full email here.

Added Davis: "It’s not clear to me why Josh thinks I contradicted myself 'again' after admitting that he 'inaccurately' paraphrased what I wrote."

Block, in a response provided to Salon, counters that the email Monday night was a mere courtesy:

Though what I said in my email subject line was accurate and taken directly from his article, at his request, I sent it bcc to him and two other people who received my initial email and also separately apologized to him if he felt misrepresented, despite not understanding how that could be given what he wrote.  At the time he was threatening to do what he ultimately did anyway, unless I sent that note.  I am still mystified.

A side note to all this: A slightly different version of Davis' post was originally featured prominently on David Frum's website, FrumForum, for much of the day Monday. It was then pulled without explanation, and a FrumForum editor did not offer a response when asked about the matter.