How I conquered my fear of latkes

Mom nearly burned down our house making potato pancakes. Then a local shop owner asked me to cook 1,500 of them 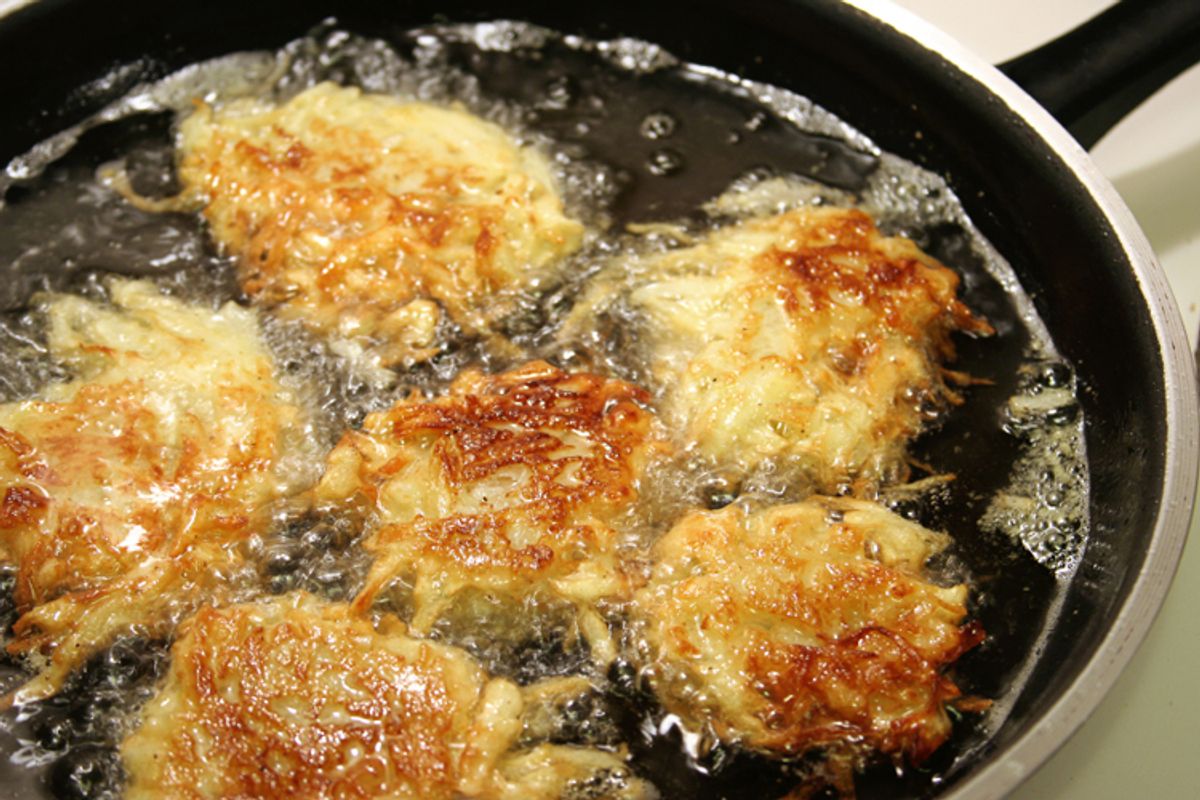 A couple thousand years after a small amount of oil burned miraculously for eight days and gave the world Hanukkah, latkes nearly burned down my childhood home. I was six, my sister was five, and our mother was attempting to fry a pan of the potato pancakes when the burner caught fire and the smoke alarm wailed, announcing our imminent doom.

My sister and I were bundled up and marched through waist-high drifts of Michigan snow to the home of our neighbors, whose children we loathed. We stared through their sliding glass doors, waiting for flames to engulf our house. Half an hour later, my mother came back to collect us. The latkes had not, it turned out, succeeded in incinerating our home. But the damage was done: from that day forward my mother refused to make latkes, or even really much at all in the way of potatoes. They were dead to her.

Tradition, however, was not, and so she compromised by way of the supermarket freezer. Each subsequent Hanukkah brought with it boxed potato pancakes left on the counter to thaw before being dressed for the occasion with applesauce and sour cream. Their holiday finery did nothing to disguise their innate sadness, much less ours at being asked to eat them in the name of celebration. They were insult added to injury. And even worse, they were squishy.

An early association between latkes and imminent destruction thus formed, I grew up with a deep distrust of them. Having a deep distrust of a potato pancake is an embarrassing proposition. You may as well admit to having a deep distrust of yarn, or a morbid fear of potpourri. But there it was: On the rare occasion I saw a latke, I smelled smoke and saw panic in my mother’s eyes. They were shifty little suckers, charming people with their delightful promise of salt and grease, but I had their number.

Rejecting one of my religion’s most celebrated, if lumpen, foods in turn complicated my feelings towards Hanukkah, a minor holiday in the eyes of almost all but Jewish children, who view it as the only holiday that brings presents instead of some form of repentance, and thus the only one that really matters.

But because Hanukkah is a celebration of light – specifically, the light that burned for eight days and allowed the ancient Jews to ritually purify the temple they had reclaimed from their Syrian-Greek oppressors – it’s also a celebration of oil, symbolized the frying of latkes. We are a people that like to celebrate our survival with foods all but guaranteed to lessen our chances of it.

So while I was perfectly happy to see Hanukkah roll around every year, and even happy to eat myself sick on the junky chocolate gelt that accompanied it, I sort of resented the whole endeavor for also asking us to celebrate latkes as part of the bargain.

And then I made the mistake of moving to New York, where I began seeing them everywhere, all the time, unyoked almost entirely from their religious context and instead lumped with bagels and knishes as my people’s contribution to the city’s carbohydrate compendium. They sat in repose behind deli glass, brawny and deeply tanned, and had the temerity to appear on brunch menus, tricked out with house-cured salmon gravlax or horseradish crema. They were almost obscene in their quantity, positively indecent in their broad secular appeal.

Friends assumed I must love them, and I hated to disappoint them. Doing so made me feel like the Grinch who stole Hanukkah, a disgrace to the race. Jews, as a rule, are taught not to reject food – think, bubbalah, of the suffering, not only of our people, but of your mother, who wants only that you should eat!

To reject this most deep-fried part of my heritage felt like a rejection of that heritage as a whole, or at least the part that everyone else could relate to, the part that casts Judaism as Falstaff, hungry and avuncular in the face of mortality. So I took my latke hatred underground.

This continued until two years ago, when the owner of a Jewish lox purveyor asked me for a favor. His store had become the closest thing I had to a synagogue in New York: I worshipped there on a weekly, sometimes twice-weekly basis, finding divinity in untold volumes of whitefish salad and lox.

Thanks to the convergence of Christmas and Hanukkah that year, the store was facing great demand for its latkes, whose renown was such that they were also popular with the gentiles. Would I, the owner asked, be interested in coming in for a few nights to cook about 1,500 of them?

I said yes, for the simple reason that my hatred of latkes was exceeded only by my love of the store, and my eagerness to be even a footnote in its almost century-old history. Also, they paid well.

Along with the other woman they hired to help out, I was given an awesome quantity of latke mixture, made by one of the store’s redoubtable cooks, and a frying tutorial by the chef, a Dominican with an almost supernatural ability to know exactly when a latke was ready to be flipped. Despite his expert tutelage, things did not begin auspiciously. Left alone our first night, my colleague N. and I promptly forgot almost everything the chef had shown us. He’d had no trouble keeping 20 latkes in constant rotation on the griddle, all parading their way towards crispy, golden-brown perfection. We, on the other hand, had trouble keeping them out of the trash. One after another they burned or exploded or refused to brown, opting instead for a sort of petulant sogginess.

I took it personally. This was what it had come to, all of these years of distrust: Me, sweating profusely in an oil-splotched T-shirt, driven to a near-babbling panic by a pile of shredded tubers. They knew I hated them, and I’d been foolish to believe we could work out our differences. I tried not to say as much to N., who seemed perfectly sane, albeit as stressed out as I was. We worked in grim silence for five hours until the store’s owner came to lock up for the night. He looked at us, looked at the trash, and inexplicably didn’t fire us.

Instead, we came back the next day for another lesson, and for whatever reason, this time it took. While more than a few latkes went to the trash, the majority did as they were asked. N. and I shaped, fried, flipped, fried, and drained latke after latke, gradually filling deep pans with them. And as I learned how to make the hot fat do my bidding, I began to relax, to find satisfaction in the sight of perfect – or at least perfectly adequate – latkes tucked into their pans and stored in the walk-in over vats of pearly herring.

By the third night, N. and I had settled into a pleasantly mindless routine. The sight of the latkes, evolving in stages across the griddle, had assumed a hypnotic quality, as had the hiss of sizzling oil.

And that’s when I began to appreciate not so much the latkes themselves as the unexpectedly comforting ritual of making them over and over again, of losing myself in repetition and finding, in the process and in this kitchen, a connection to my heritage that I’d never found in a sermon or nine long years of religious school classes.

The rows of latkes formed a through line to people who had died before I was born, who had grated and fried potatoes in celebration simply because they could, and because eating hot, fattening food was both an affirmation and a greasy middle finger extended towards life’s astonishing rottenness.

And so celebrating latkes as part of Hanukkah finally made sense to me. It’s a food symbolic of victory, however short-lived, over those who would prefer we not exist, an inherently fattening food custom-made to cushion us against hardship. Hunched over the flattop, coated in a thin film of atomized grease, I finally came to associate latkes not with imminent destruction but as one of our last – and most lasting – lines of defense against it. I won’t say that I saw God in a potato pancake, but I did see logic, survival, and a stolid sort of beauty. And that, for me, was good enough.