Why women have second trimester abortions

Late abortions are under attack in state houses nationwide. A new study shows why it's important they remain legal 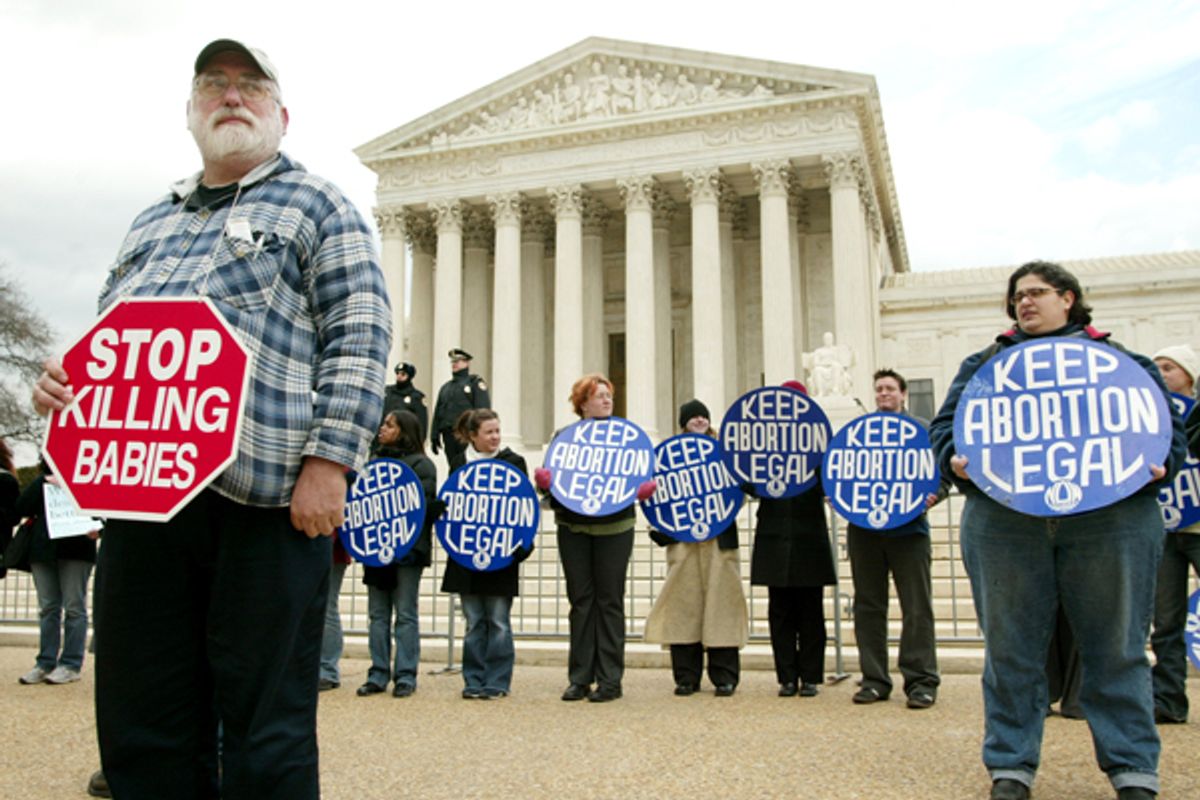 Despite those thumb-sucking fetuses you see waved around protests, nearly 90 percent of abortions occur in the first 12 weeks of a pregnancy. It’s easy for even nominally pro-choice people to judge or shudder at the smaller number of abortions that happen beyond that mark, but that may be because the circumstances of those women’s lives are so remote to them.

Later abortions are no one’s ideal situation, since the price of an abortion goes up, along with the relative medical risks, with every week of gestation. It also becomes harder to find a provider. But as a new quantitative study from the Guttmacher Institute shows for the first time, most of these women aren’t living in ideal situations – they are likelier to be teens, to have less education and to have more disrupted lives.

The stereotype, says Susan Schewel, executive director of the Women's Medical Fund in Philadelphia, is that women who have second-trimester abortions are "willfully irresponsible. But the women who call our help line are instead women who often are trying to be responsible, but their lives are so difficult. They have so many balls in the air, and more pressing financial needs – for example, housing. They just can’t manage everything." And of course, many women discover fetal anomalies or experience serious health problems later in their pregnancies.

Volunteers and staffers at abortion funds, who help as many of these desperate cases as they can manage with donations, know more than a bit about these women’s concrete realities, so I asked them to shed some light on the numbers. They describe a world where brutal economic realities collide with anti-choice policies that disproportionately affect low-income women.

The anti-choice movement’s attempts to cut off the supply of abortion is also all but guaranteed to make these women’s lives more difficult. The governors of Pennsylvania and Virginia, for example, are currently weighing prohibitive regulations on abortion clinics on medically irrelevant factors -- based on the width of clinic hallways, for example -- that would effectively shut down most of those states’ clinics. A similar law is being challenged in Kansas.

Lynn Jackson, the national case manager for the National Network of Abortion Funds says, “I think if people could talk about it more they wouldn’t be trying to figure it out on their own, and they’d have people that they could go to for support. If women just knew they could get the resources, they would do it earlier.”

Here are some of the other factors described in the study about women who have second-trimester abortions:

They are more likely to be younger. Teenagers disproportionately have second-trimester abortions, and everyone cites the same reasons: They are often in denial, lacking education about their own bodies, or terrified of telling anyone. And 36 states require parents to be involved in some way in minor's abortions, unless they want to go before a judge for a bypass. "That’s intimidating for teens, especially young teens," says Schewel.

They tend to have less education and are more likely to be African-American. The Guttmacher study controlled for income and life circumstances, but noted that "lower levels of education in this context could still serve as proxy for financial difficulties such as obtaining money to pay for an abortion in the first trimester." The abortion funding community has a phrase for what often happens to the rest of the woman who can’t afford abortions: Chasing the fee. Basically, a woman will have an appointment for an earlier abortion, can’t raise the funds in time, and has to reschedule. In the meantime, the costs of the procedure go up, and there are other demands on that wad of cash. “The worst thing about is the longer there’s a delay, the more they have to raise,” says Val Vilott of the D.C. Abortion Fund.

The Hyde Amendment prohibits federal funding for abortion except in cases of rape, incest and life endangerment, and only 17 states cover abortions through their Medicaid programs, for a total of 20 percent of all abortions covered through public funding. Washington, D.C., has a special burden here: Its right to use its own funds to pay for low-income women’s abortions was rescinded in a federal budget compromise over a threatened shutdown. Vilott points out the absurdity: “The federal government could only stay open only on the back of D.C.’s most vulnerable and poor women.” They got an initial bump in donations as a result, but are now figuring out longer-term solutions – the hotline’s call volume has quadrupled since 2007.

Given that 60 percent of women who have abortions are already mothers, coming up with the money can be a tough calculus even with some help. “I spoke with someone yesterday who said she was going to return some of the Christmas gifts she’d gotten for her children,” says Schewel.

They are more likely to have experienced at least three “disruptive events” in the past year. That included being unemployed for more than a month, being separated from a partner, experiencing a serious medical condition, being the victim of a crime, etc. Vilott says that some of the women who call the D.C. Abortion Fund “either their circumstances change mid pregnancy, they lose a job or their apartment disappears. Or they’re women that didn’t have access up until the point they call us. For example, they’re escaping a situation that was negatively impacting them and they didn’t feel safe.” Many women the funds hear from have come out of abusive relationships where abortion was a contentious issue.

And at least some of these were wanted pregnancies. Schewel describes cases where the women “were pregnant, they were excited about it, looking forward to welcoming a child into their family. But somewhere into the pregnancy they lose their job or unemployment runs out.” Many of these women live in precarious circumstances that even struggling middle class people can have trouble imagining. “They don’t have a safety net,” says Jackson. “If I needed some help I could probably call my parents but a lot of people don’t have the ability to do that.”

If they’re having abortions after 16 weeks, they tend to be slightly more affluent. This was a slightly surprising finding of the study – that “women with family incomes 200-plus-percent of poverty were more likely than poor women to be second trimester abortion patients obtaining abortions at 16-plus weeks.” But it turns out that’s because abortion becomes so prohibitively expensive after 16 weeks that many lower-income women simply have to give up. Schewel says that yesterday alone,  “I must have had calls from four women who were further along and the gap was too big for us to cover.” Even in a country where abortion is still legal, these women don’t have much of a “choice” at all.