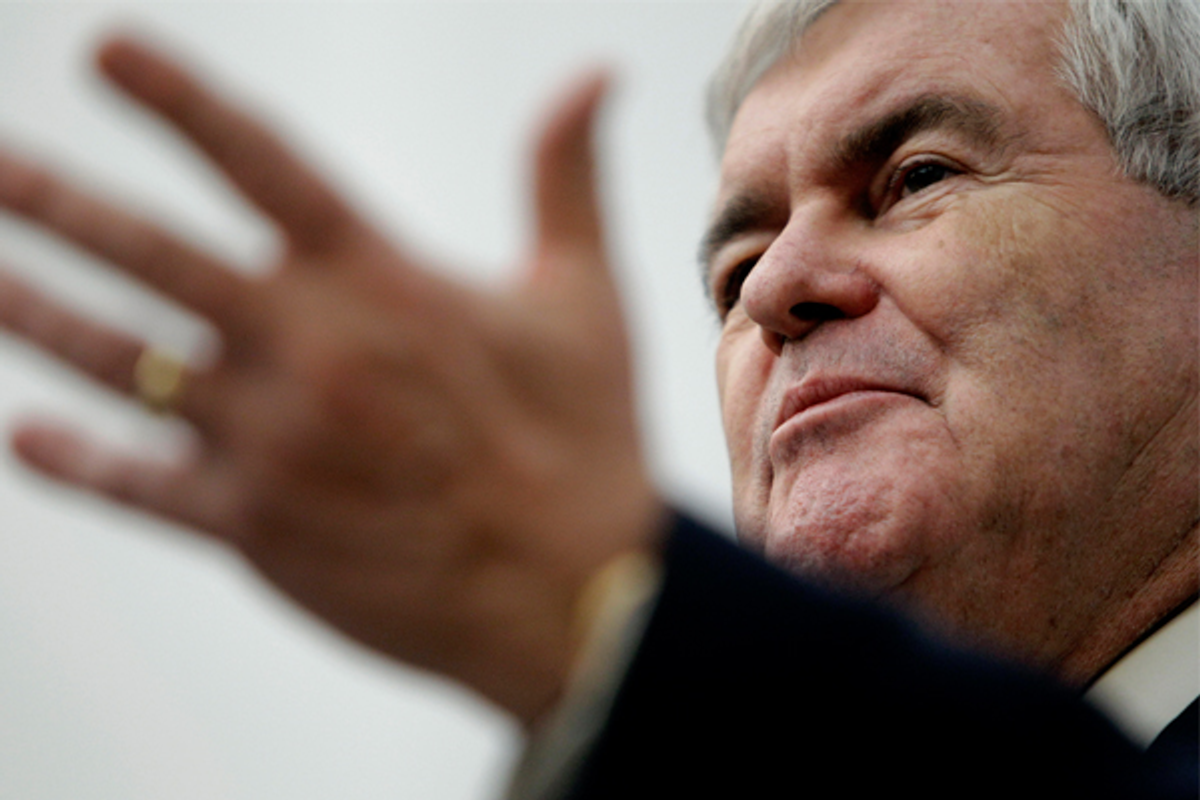 Republican presidential candidate Newt Gingrich has been hospitalized after collapsing this morning outside of a diner in Davenport, Iowa. The former speaker had just left a sparsely attended "meet and greet" at Annie’s Coffee Shop when he was confronted by ABC news reporter Jake Tapper, who asked Mr. Gingrich to explain why so many of his former colleagues have said that he is too unstable to be president. Mr. Gingrich glared at Mr. Tapper for several seconds before cursing, stumbling backward and then crashing through a nearby display window, reportedly filled with ladies clothing.

Sources at Mencken General Hospital say that Mr. Gingrich, who has recently been the target of millions of dollars in negative ads, is being treated for a severely damaged ego. He is unconscious and currently in intensive care. One hospital source, who insisted on anonymity, said the Iowa facility is ill-equipped to properly treat the candidate. “Frankly, we’ve never seen an ego this large and fragile,” said the doctor. “We’re doing our best, but they will probably have to airlift him back to D.C.”

Another source said that, for the time being, campaign aides and Callista Gingrich, the candidate’s wife, have been a constant presence at the former speaker’s bedside and are doing their best to help  treat Mr. Gingrich. “Callista has been whispering, ‘You get sixty thousand dollars per speech,’ into his ear over and over again,” said the source. "And there is a succession of aides who take turns holding up a copy of the Time magazine issue that named him Man of the Year.” (It has been reported that Mr. Gingrich always keeps several copies of the issue with him, much like a diabetic does with insulin.)

Campaign aides were disappointed to find that the candidate’s iPod was crushed to pieces after Mr. Gingrich, who is said to weigh nearly 300 pounds, fell through the clothing store display window. Mr. Gingrich’s iPod reportedly contains all of his political speeches, every single one of the lectures the former professor delivered at West Georgia College and recordings of all of his former mistresses whispering, "You are a genius." “Whenever Newt’s not talking, which admittedly isn’t often, he’s listening to that iPod,” said one campaign source. “It would really help if we could pop that thing onto his head right now."