Ron Paul and the second coming of Buchananism 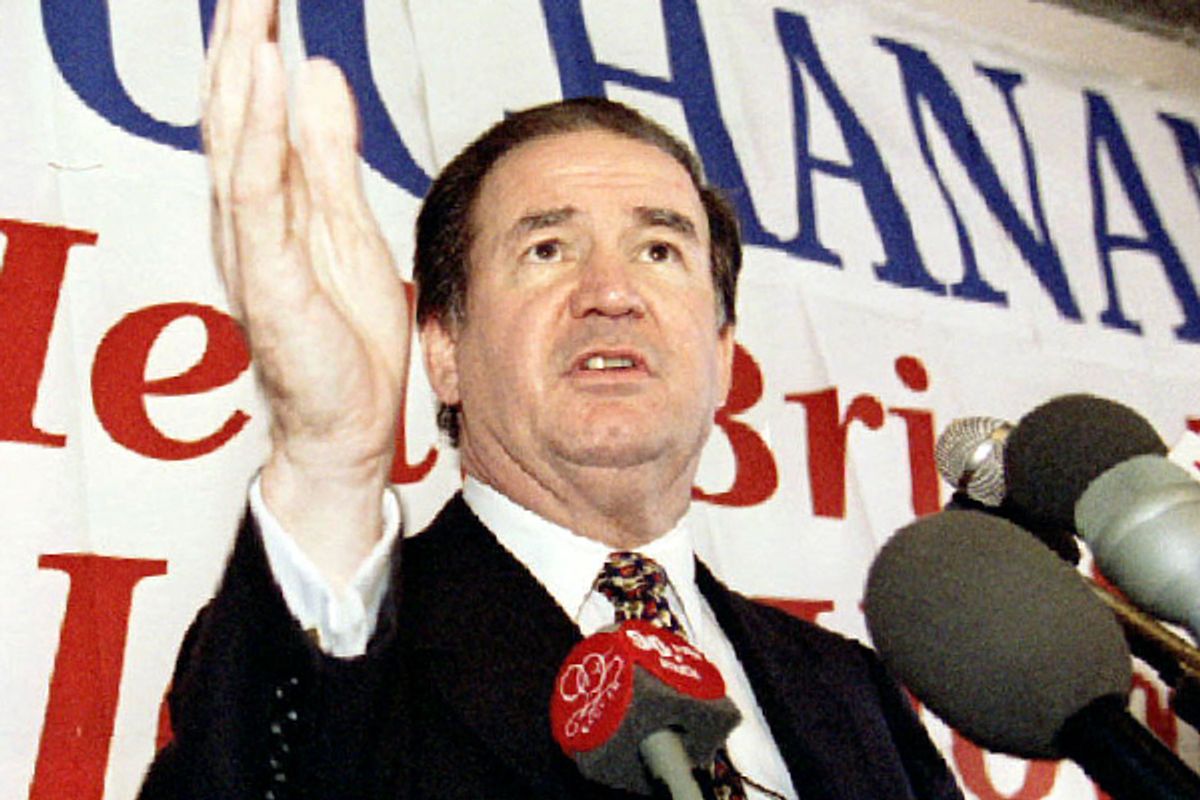 Ron Paul is currently mounting his third presidential campaign, but there might have been a fourth if it hadn't been for Pat Buchanan.

It was 20 years ago, back in the fall of 1991, that Paul began making noise about taking on President George H.W. Bush in the next year's Republican presidential primaries. Bush's poll numbers were still somewhat inflated by the early '91 Gulf War but were clearly heading south, thanks to a stalling economy, and anger on the right over his earlier decision to go back on his "Read my lips!" anti-tax pledge and other supposed apostasies was bubbling back to the surface.

Paul, then a former Texas congressman three years removed from a little-noticed White House bid under the Libertarian banner, seemed ready to wage a protest campaign in New Hampshire, until Buchanan volunteered to do it. At the time, he was a former Nixon and Reagan administration official with a national media profile through his work on CNN's "Crossfire," but the '92 campaign transformed him into a genuine political force -- and set the stage for a follow-up bid in 1996 that severely tested the Republican Party's comfort with his paleoconservative views on trade and foreign policy.

The story of Buchanan's rise in the '90s is worth considering now, with Paul suddenly running in first place in some Iowa polls and second place in New Hampshire and poised to gobble up convention delegates in numerous caucus states. Not since Buchanan has a Republican presidential candidate with such avowedly non-interventionist views emerged as such a serious player in the nominating process.

When Buchanan ran in '92, he embraced a Paul-like platform -- vehemently anti-tax and heavy on warnings about unsustainable empire and  encroaching world government -- although the two men differed (and continue to differ) in some policy areas. "It was the 'Come home, America,' message," Buchanan recalled in an interview this week. "George McGovern was out there saying it in 1972, but it was the right thing to do in '92."

In that campaign, two of Paul's closest allies, Lew Rockwell and Murray Rothbard, backed Buchanan, and one news account identified Paul as the chairman of Buchanan's Economic Advisory Committee, though Buchanan says he can't recall if Paul played a formal role. Buchanan ended up nabbing nearly 40 percent of the vote in New Hampshire, a humiliating result for Bush, then stalked the president all the way to the national convention in Houston, where Buchanan delivered his famous "culture war" speech.

On the strength of that '92 performance, Buchanan ran again in '96, and fared even better. After scoring early victories in Alaska and Louisiana, he nearly knocked off front-runner Bob Dole in Iowa, then pulled off one of the biggest surprises of the modern primary era, winning the New Hampshire primary. Suddenly, the idea that Buchanan might win the nomination was taken seriously. Which is probably what killed his campaign, because the party's most influential voices, who deemed Buchanan an unacceptable nominee, immediately united to tear him down and save Dole, who scored a decisive victory in South Carolina a few weeks later that pretty much ended the race.

Buchanan thinks Paul's campaign is on a similar trajectory, mainly because of his foreign policy views.

"There’s just no question that the Republican Party as currently constituted is very hawkish on Iran, is very hawkish in taking Israel’s side against Obama, and very intent on using those issues to beat Obama," Buchanan said.

Buchanan said he was particularly impressed by the number of supporters Paul managed to turn out at August's Ames straw poll, an event Buchanan himself contested twice. “4,500 votes in the Iowa straw poll – that takes some work," he said. "I couldn’t get that. It was the third most ever, and he was only 150 votes or so behind [Michele Bachmann]. And no one will ever touch what Bush did back in 1999."

Already, nervous Republicans are seeking to undermine Paul, fearful of how a big win or two in the primary season might embolden him. But Buchanan said it's nothing compared to what he faced from his own party's leaders after his '96 New Hampshire win.

“Candidly, I expect that if he does well in Iowa and then New Hampshire, they will come after him very hard," he said.

Buchanan called Paul "an honest, principled, courageous political leader," but stressed that he won't be making any endorsement in the GOP primary because of his MSNBC contract. While he doesn't think Paul can actually win the nomination, he insists the GOP is slowly moving in his direction, with the price-tag that comes with a sustained overseas presence eventually wearing down the GOP's hawkishness.

"What’s going to bring it down is these deficits," he said. "I think Ron Paul and Pat Buchanan are ahead of their time."