The best nonfiction TV of 2011 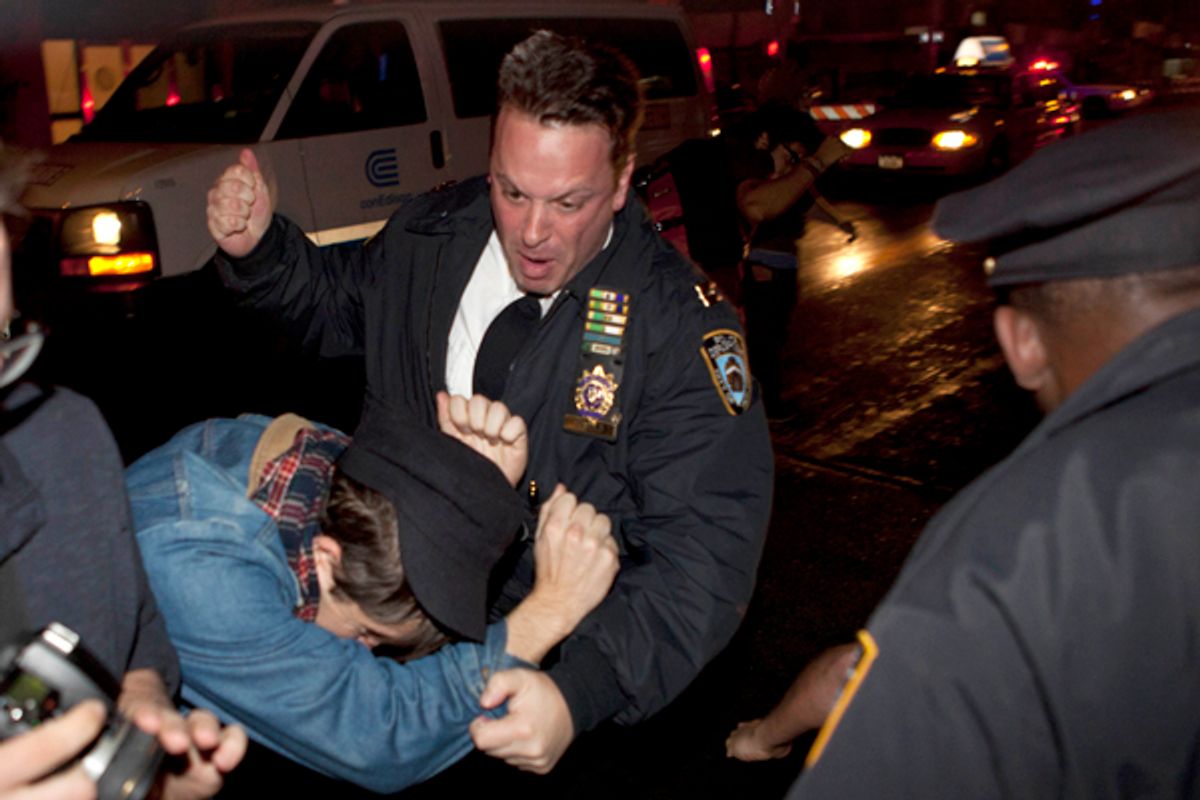 An Occupy Wall Street protester draws contact from a police officer near Zuccotti Park after being ordered to leave the longtime encampment in New York, Nov. 15, 2011 (AP/John Minchillo)
--

The only so-called reality program to make my list, this Discovery Channel program is really a documentary series about the toll taken by relentless physical labor. The Cornelia Marie and its rivals fish icy waters for crab, hoping to up their totals, but the show itself really doesn't care all that much about who's ahead and who's behind. It's always more interested in the human stories -- the most central of which found the Cornelia Marie's crew struggling to muddle on after the death of Capt. Phil Harris last season. Cable is currently filled with series that desperately want to be "Deadliest Catch" -- see "Ice Road Truckers," "Swamp People," etc. -- but they tend to miss the atmosphere and deep attention to psychology that make this series so special.

Martin Scorsese's documentary about the quiet Beatle wasn't on the level of his Bob Dylan documentary, "No Direction Home," but then, very few documentaries are. This was fascinating stuff, though -- an honest attempt to capture an unusually enigmatic pop artist without oversimplifying or misrepresenting him. Harrison's second wife, Olivia, provided Scorsese with rarely seen photos and film footage, and perhaps as a result, there were parts where it seemed as though the director was treading lightly (the documentary was somewhat light on details about Harrison's first marriage to Patti Boyd, though her affair with Eric Clapton was the subject of a long, piercing segment). But the depiction of Harrison's spiritual and musical striving, his political activism, his second career as a film producer, and his somewhat prickly relationship with his fellow Beatles were all expertly handled. And Scorsese found an unusual storytelling rhythm that suited his subject, immersing the audience in long stretches of musical-visual reverie -- basically long, uninterrupted, narration-free music videos -- and then abruptly cutting them off, sometimes in mid-lyric, and cutting to an interview. The effect was like being in a blissful trance only to have it suddenly and cruelly shattered.

Watch Roots of PROHIBITION A Nation of Drunkards on PBS. See more from Ken Burns.

Documentarian Ken Burns is slowly but surely working his way through America's defining historical subjects and pivotal eras, but damned if his tortoiselike doggedness doesn't pay off more often than not. "Prohibition," about the impact of the 18th Amendment on American life, was one of his best works, right up there with "The Civil War" and "Baseball." It had everything one could possibly want from an epic historical work -- big themes, great characters, period detail, and plenty of violence, sex, intoxication and modern-day resonance (without putting too fine a point on it, Burns showed how the hypocrisies of the anti-booze crusade presaged the war on drugs). Plus, the series was drily funny, pun intended.

Personal portraits of cancer patients rise or fall for the same reasons as other stories: Either the characters and themes and execution are compelling, or they aren't. This film by Perri Peltz is aces in every department. But while it gives the physical and emotional impact of cancer the attention it deserves, it's ultimately about more than one woman's determination to battle illness. The title character, a rich and conventionally attractive woman who finds out she has cancer, is moved to wonder what happens to women who don't have her advantages. "It's not only a medical challenge; it's a moral challenge," a doctor tells her. The short version: They suffer. Her casual narcissism punctured for good, Ricks remakes herself as an activist and philanthropist and radically revamps her life to match her own health challenges and the mission she's embarked upon. This is not just a powerfully affecting personal story; it's a parable of the 1 percent being forced to learn that other people exist, and that their lives matter, too.

An extraordinary portrait of an extraordinary man, "Harry Belafonte: Sing Your Song" is a smart, loving profile of the singer-actor-activist that stresses the last part of that hyphenate. Belafonte's racial and political consciousness drove every significant decision in his career as both artist and public figure, and his convictions continued to evolve to meet new realities; he segued from anti-Jim Crow activism in the '60s to anti-apartheid activism in the '80s to a kind of border-shattering, ethnicity-transcending One World-ism in the 21st century. This documentary by Susan Rostock shows how much that decision cost him, turning him into an absent father even as it marked him as a great and influential person.

This documentary by Robert Weide is one of the sharpest, funniest, most revelatory installments of "American Masters." It helps that the director, frequent Larry David collaborator Robert Weide, not only knows Woody Allen's life and filmography but has thought about what they have meant in the greater scheme. The movie works as both a general survey of Woody Allen's long and and prolific career as a writer-director-actor-comedian and as a knowing portrait of how comedy changed during the second half of the 20th century. Allen himself is unexpectedly forthcoming and available, speaking frankly about his neuroses, his romantic relationships (including the Soon-Yi scandal), his artistic obsessions, and his quantity-over-quality strategy (the natural evolution of his early carer as a joke writer and stand-up comic). At one point Allen shows the director a drawer full of scraps of paper on which he's scrawled fragments of ideas for films -- a modest trove of inspiration, like this documentary.

Director Marshall Curry's look at arson-inclined members of the Earth Liberation Front is a troubling and troublesome documentary, intelligent and impassioned but obviously deeply conflicted. It's been a long time since I've seen a movie about violent response to perceived injustice that seemed to be working out its own feelings right there on the screen while you watched it. The closest equivalent to "If a Tree Falls" might be Tony Kaye's underrated and epically long documentary about the antiabortion fringe, "Lake of Fire." It's alternately enthralled and horrified by the actions of the ELF, a mostly young bunch of activists who decided -- not without reason -- that nonviolent protest against the wanton destruction of forests was getting them nowhere, and that they had to torch logging facilities and other offending structures to force the machine to grind to a halt.

Watch Where Soldiers Come From - Trailer on PBS. See more from POV.

This is a low-key and concise yet brilliant "P.O.V." documentary by Heather Courtney, about a group of small-town friends who join the National Guard and get shipped off to fight in the war on terror. As I wrote in my review: "What makes 'Where Soldiers Come From' so unusual is the relaxed and intelligent way that it connects the private and public experience of war. Deftly switching back and forth between a tiny town in Michigan’s Upper Peninsula and the chaos of Afghanistan, the movie plays like an elegant real-life answer to 'The Best Years of Our Lives' and 'The Deer Hunter.' ... These soldiers, their girlfriends and their families aren’t rhetorical abstractions to the filmmaker. They’re ordinary young people who viewed service during wartime as a career option and were forever changed by their experience."

This Chinese documentary, which aired last September on "POV," is one of the best movies of any kind that I've ever seen. I am convinced that if every working filmmaker or aspiring filmmaker would just set aside 90 minutes to watch and really absorb it, film and television would improve overnight. It's that good. As I wrote in a Sept. 27 review, the movie is "about a Chinese family joining 130 million migrant workers as they journey from the city to their home in the country to reunite with their families at New Year's. Directed by Lixin Fan, "Last Train Home" is not a travelogue, a polemic or a history lesson, but simply a story of people, told with elegance and care. It’s also a rare recent documentary that avoids every modern nonfiction cliché. It features no narration by moonlighting movie stars, no bouncy hand-held camerawork, no fast cutting, no clever graphics, no reenactments, no archival photos, no razzle-dazzle montages with ironic pop songs or Philip Glass music, no horrifying family revelations, and no competitions ending with a teary-eyed champion hoisting a trophy. All it does is point a camera and capture life as it happens."

I struggled with whether to even include this on my list, since technically none of the videos of police abusing Occupy Wall Street protesters really qualify as "movies" or "programs" in any conventional sense. Some of the most revealing (and often horrifying) images were captured on the fly with the tiny built-in lenses of camera phones, with rough sound that dropped out regularly and grainy images that bounced all over the place, usually because the camerapeople were being jostled by protesters or hauling ass down the street to avoid getting their skulls cracked open. For the first time since the Vietnam era, a mostly young group of Americans was out there risking injury and imprisonment to say what millions more people know in their bones to be true but couldn't or wouldn't articulate themselves: that the very rich are legally bribing our elected officials, distorting our tax code and our regulatory laws, and otherwise rigging the game, such as it is, to make more money flow into their pockets, year after year, oblivious to the fact that their greed is shrinking the middle class and turning the daily lives of increasing millions of Americans into a blandly degrading and endless slog, a smiley-faced American version of a Third World sweatshop. For daring to even begin to articulate these shapeless and protean but real resentments -- to very, very briefly force cities to stop whatever mundane daily business they were doing, and think about this madness for a few days, or weeks -- the protesters were subjected to the full force and might of the nation's municipal police departments (and in some cases, pathetic campus rent-a-cops playing soldier dress-up). The message was crystal clear. This is what happens when you question the so-called natural order of things: You will be beaten, kicked, pepper-sprayed, shot with rubber bullets. Open your mouth and you get a boot in it. Offend the people who own this country, inconvenience the worker-bees during their daily commutes, and you'll get stomped into pulp like grapes in a bin.

"It does not make you tough to hurt these people!" shouted a real soldier in a much-viewed viral video, chastising the toy soldiers of the NYPD who beat and pepper-sprayed unarmed protesters. But the powers that be are largely immune to shame; overwhelming, sadistic force is the whole point of the exercise, shock and awe in the streets of America. These images are not going away. They will exist forever in cyberspace. I'm deeply glad that everyone had to see them, however briefly, because now we're all on notice about what sort of country we live in, if by chance any of us were ignorant or stupid enough to doubt it.