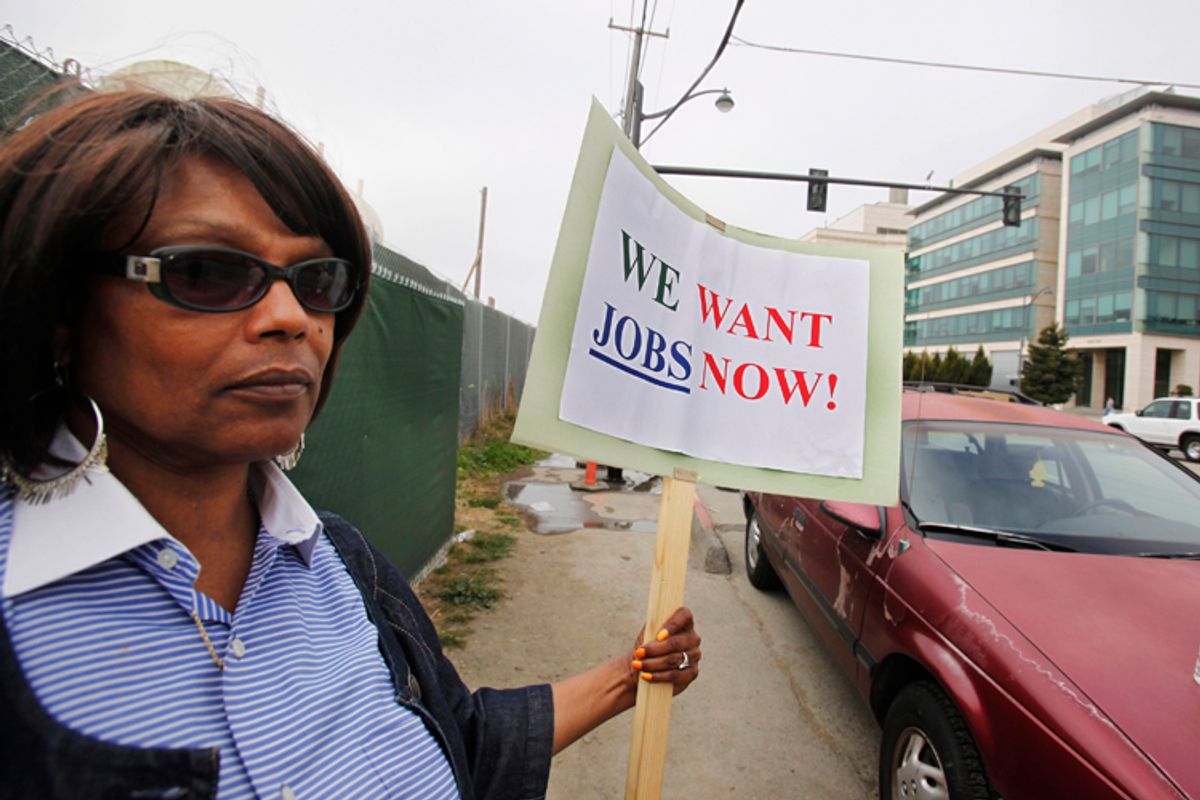 Unemployment, not tax relief, is the issue (AP/Paul Sakuma)
--

As the showdown between President Obama and House Republicans continues, it is worth asking just how maintaining a cut in payroll taxes came to dominate the progressive agenda. To be clear, the economy (some recent good news aside) remains in serious need of fiscal support to alleviate the obvious crisis of joblessness. I don't want to dampen enthusiasm for a measure that does indeed provide this support. But political realism should not completely overshadow the economic realism indicating that the payroll tax cut is a limited tool.

It seems obvious why Republicans didn’t like the MWP credit – it was actually well-targeted at low- and moderate-income households and it was a tax cut associated with the Obama administration. So, to grease the wheels of getting more fiscal support into an economy that needed it, the administration acquiesced to this swapping out of the MWP credit for a payroll tax cut. One is surely allowed to be ambivalent about whether this deal should’ve been struck, but it’s awfully hard to criticize the administration’s impulse behind it – they were actually trying to help ameliorate the very real problem of unemployment. And the MWP-for-payroll tax cut swap actually got more money out into the economy, so it wasn’t all bad.

But the payroll tax cut is pretty middling fiscal support in terms of jobs created per dollar it adds to the deficit. It is notably less efficient as a job creator than the MWP credit. It also provides a political hammer to opponents of Social Security who can claim that the cut has depleted the program’s Trust Fund ahead of schedule, requiring cuts in benefits. These opponents are wrong, of course: the legislation that cut the payroll tax also instructed Treasury to credit the Trust Fund for the lost revenue – but since when has being factually wrong defanged a political argument? And who’s to say that the next year of payroll tax cuts will maintain this commitment to hold the Trust Fund whole?

Further, the way the payroll tax cut is being marketed by too many of its Democratic proponents is maddening. Essentially, they sound like Republicans, and tout the simple virtue of the extension as being families having to pay less in taxes, period. How many of us have heard the statistic about a family earning $50,000 in wages will save $1,000 from the payroll tax cut? I’d guess pretty much everybody who has dipped into this debate for even a second.

On the other hand, how many know the estimates of how many jobs will be created or preserved because of the increased economic activity it spurs? Very few of us who aren’t economists, I’d imagine. Conservative estimates put it between 400,000 to 700,000 jobs. But it’s the jobs that make this tax cut worth doing – unless progressives are willing to willing to accede to the Republican framing that all the economy and American families really need is “tax relief” – a phrase that actually appears in the Senate bill extending the payroll tax cut for two extra months.

This inability to connect economic policy to the larger problem of joblessness is a real problem with the debate over the payroll tax cut. This disconnect explains why the unemployment insurance extension bundled with the payroll tax cut have attracted so much less attention. After all, if all that matters is the first tranche of money, the payroll tax cut will affect many more households than the UI extension. But all serious economists agree that the extension of unemployment insurance is a far more efficient fiscal support – providing about 50 to 100 percent more jobs per dollar added to the deficit.

What makes unemployment insurance so much more efficient? It is laser-targeted at families in genuine distress, meaning that the recipients will spend every marginal dollar that comes in the door. This also makes the extension better targeted at alleviating actual economic misery. I, for example, get a pretty big benefit from the payroll tax cut and that’s nice, but I’m (knock wood) doing pretty well. People like me really shouldn’t be highest on the list of policymakers’ concerns today. Sadly, this last point might not make for good politics.

President Obama spoke Thursday about the need to extend these UI benefits. Good for him for reminding people that it’s not just tax cuts on the agenda. And if he can connect both unemployment insurance and the payroll tax cut issue to the larger jobs-crisis, even better for him. It would be a welcome addition to what has been too narrow debate.

Josh Bivens is an economist at the Economic Policy Institute and author of "Everybody Wins Except for Most of Us: What Economics Teaches About Globalization."