I miss hating the Soviet Union

My obsession with the USSR was a form of teen rebellion. Now, I can't help thinking: They despised us like pros 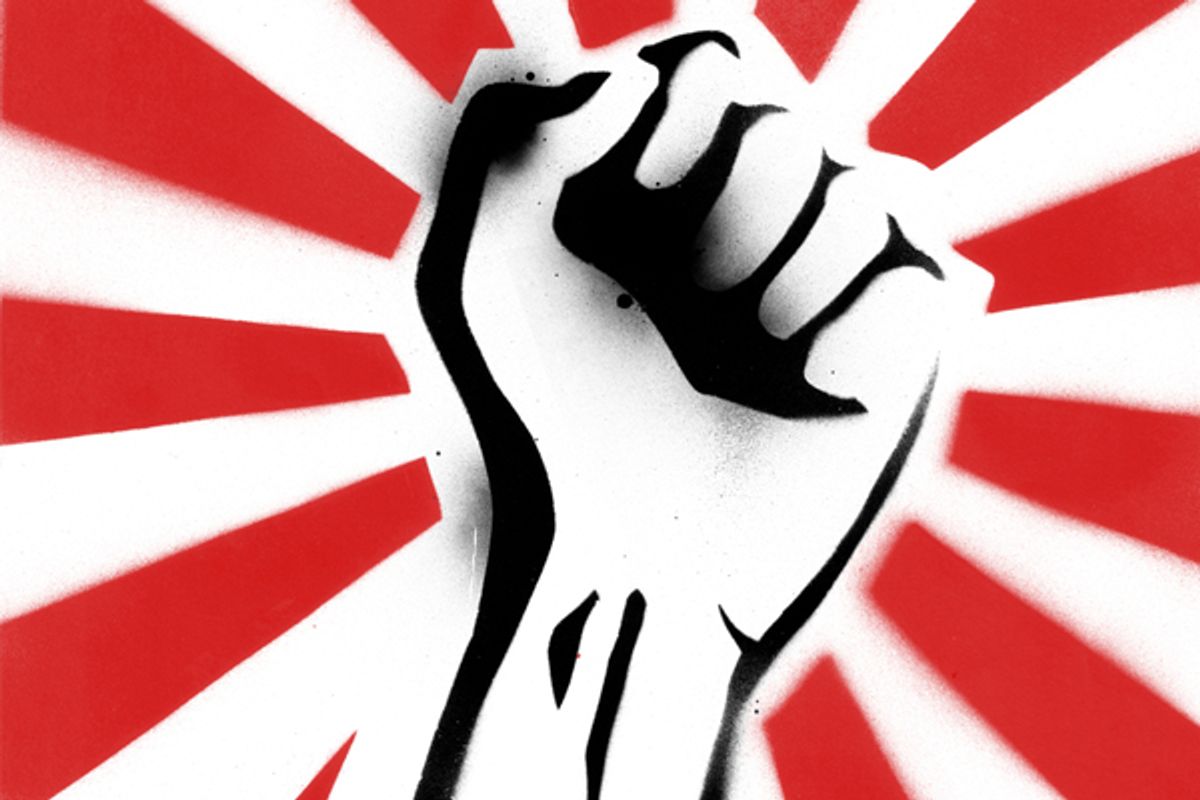 Ronnie Dunn, half of the former bestselling country music duo Brooks & Dunn, has a singing voice that’s echoed through many a truck stop and stadium. And Dunn loves himself some Soviet art.

You read that right. Soviet art. This summer, I went to Nashville to interview Dunn for PRI’s "Studio 360." “I’ll show you my Gerasimov,” he said with a drawl, as he strode up his mansion’s staircase in cowboy boots. “That one’s a Timkov.” The balladeer showed me wall after wall of impressionistic landscapes, portraits and sketches. And then he turned the interview on me: What was Moscow like the last time I went? How’s the traffic? When did I learn Russian, and why?

“Wow,” I thought after I collected my jaw off the floor and said goodbye. “He’s got the Thing. He’s got it bad.”

I should know. I’ve had the Thing most of my life. The Soviet Thing: an addictive mixture of wonder and disgust evoked by all aspects of that communist empire.

The Thing used to rule whole sectors of our military, academia and media. Of course, it suffered a pretty bad blow 20 years ago this month, when the Soviet Union finally gave up the ghost. But it’s still powerful, maybe now more than ever, as an unacknowledged absence in American life. We live in a country with a USSR-size hole in its soul.

Like Ronnie Dunn, I come from Texas, a place where people used to run for city council on their anti-commie credentials. Better Dead Than Red could have been our state slogan. The summer of 1984, after making his possibly-not-accidental gaffe that he’d begin bombing Russia “in five minutes,” President Ronald Reagan descended on my hometown for his joyful renomination. The Dallas RNC was a festival of Cold War hard-assery.

In that atmosphere, rebellion was easy: just pop open a textbook and learn the Cyrillic alphabet. That’s what I’d been doing at the only high school in Dallas to offer Russian. I figured I’d become a foreign correspondent like the guys whose names graced the USSR sections in bookstores: Harrison Salisbury, David Satter, Hedrick Smith. Go to the Soviet Union, decode mysteries, publish fat tome. Easy!

And then I actually went there. Inspired by the Юs and Яs I was tossing off, my grandparents booked us on a five-city group tour of the USSR. The summer of 1985, we boarded a plane for Leningrad.

I found everything I wanted — a world apart, bleak but exotic. Our first hotel room overlooked an unfinished construction pit filled with dirty water. Television showed factories, Mikhail Gorbachev and ballet. Outside the windows of our tour bus, the grim signage flattered my primitive Russian: a book store was called BOOK STORE; the restaurants, RESTAURANT. We were the wards of Intourist, the state (and only) tourism agency, and our guide was chirpy and sweet in English. But I could spark apparatchik contempt in her face whenever I mangled her native tongue, which was often.

The Soviets paid their flat-footed American tourists (code name, “Dear Guests!”) way more attention than we deserved. Every meal was an alcohol-laden banquet, in between which Intourist arranged endless cultural displays and/or “exchanges” with wincing local journalists. Away from our minders, people swarmed us. In Yerevan, friendly Armenians invited us to parties, wheedled us out of Eurythmics cassettes, and — in the case of the young ladies — tried to get into our pants. In Kiev, a sad college student approached me to practice English. I was obsessed with finding propaganda souvenirs, so he took me to a lonely shop, sighing as I snatched up GLORY TO THE WORKER posters.

When I got back to Dallas, I missed all that Soviet attention horribly. Then I realized that it was still all around me, if fainter. After all, the Soviets had missiles dedicated to my hometown, a place that, if you asked me, had nothing better going for it than some new parking ramps downtown. Our parking ramps could be the start of Armageddon! They were special. Yet they also remained unexploded.

The Soviets engaged us on our favorite terms, ideological. In the shining light of their competitive fixation, anything we did right was a moral victory. Just watch this archival footage of Richard Nixon debating Soviet Premier Nikita Krushchev in 1959. Nixon is bragging about color TV cameras. And he’s having the time of his life.

Middle Eastern terrorists are disorganized; the Chinese have an annoying habit of making all our stuff. The Soviets stood apart but hated us like pros. How can you ever get over an enemy like that?

The Supreme Soviet voted itself out of existence on Dec. 26, 1991. I don’t recall caring any more than the rest of America. We won. Not only was the USSR a has-been, but it had also devolved into 15  countries whose names I wouldn’t have recognized except that I’d been to some of them. I’d stopped studying Russian years before — the trip had the perverse effect of making me realize the language was actually hard. But then immigrants from former Soviet lands started showing up. They were Afghanistan War veterans, artists, just ordinary guys overstaying their visas. They told me little scraps of jokes in Russian that I could understand. They introduced me to underground Soviet rock I could’ve heard in 1985 if I’d had a clue.

And so I started studying Russian again. In 1998, I made the first of many trips back to the former Soviet Union, to Yerevan. The party town I remembered had been replaced by a dark maze of casinos and starving dogs. In Kiev, Nike — or was it Adidas? — emblazoned the window of the old propaganda shop. I was finally a correspondent, not of static mysteries, but of breathless, murky, heart-rending change. But my bosses didn’t know exactly where I was. “What did you learn in the USSR?” the CEO of a major-market public broadcaster asked when I returned.

What better sign that we miss the USSR than our total refusal to learn what that mess of nations is called now? Sometimes I’ll meet smart, usually trilingual kids in a former Soviet republic — say, Moldova — who’ll ask what story about their country interests Americans. How can I tell them the truth, “None”? If Moldova wants half a nanosecond of our attention, it might pick a better name, such as that of its biggest shopping center, Malldova. Then get back in the news-from-confusing-places line behind its 14 siblings.

What we crave is menace, and only Russia occasionally fits the bill. (Bonus — still easy to find on a map!). True, its citizens just seem to want ordinary things like matching towels, fair elections and the rule of law. But fortunately, Russia’s leaders don’t (they prefer matching jet décor). If anyone misses the Cold War more than we do these days, it’s Prime Minister Vladimir Putin. When he goes head-to-head with Sen. John McCain, it’s just like old times.

Yeah, old times. Dangerous. Surreal. And all the more so because we can’t even remember what it was originally about. We only know that at some point, something bad made us feel good about our place in the world, and now it’s gone.

By the end of my interview with Ronnie Dunn about Soviet art, he was openly regretting it. “I kinda don’t want the secret out, to be honest with you,” he said when I asked if he could share his passion with the country music world.  Oddly, though, he keeps talking about it. He just doesn’t link to any of these stories on his website or fan pages. I don’t blame him. Many of his fans are as politically conservative as he is, and I imagine he has a healthy respect for the limits of what they can absorb. Collecting art might be sissy. Collecting Soviet art? There’s still room for something traitorous in that vintage hobby.

In his latest New Yorker piece, David Remnick writes, “This month, Russians will commemorate the twentieth anniversary of the collapse of the Soviet Union with almost universal silence.” Remnick has an A-league case of the Soviet Thing, but for once, he’s wrong. Whether they’re singing old protest songs or penning obscene new ones, Russians have been talking about today’s anniversary constantly. How could they not? They lived through the bizarre nightmare of the USSR. We’re the ones who haven’t woken up yet.

Julia Barton is a writer who lives in St. Paul, Minnesota. Her website is juliabarton.com.