Manning is charged with aiding terrorists 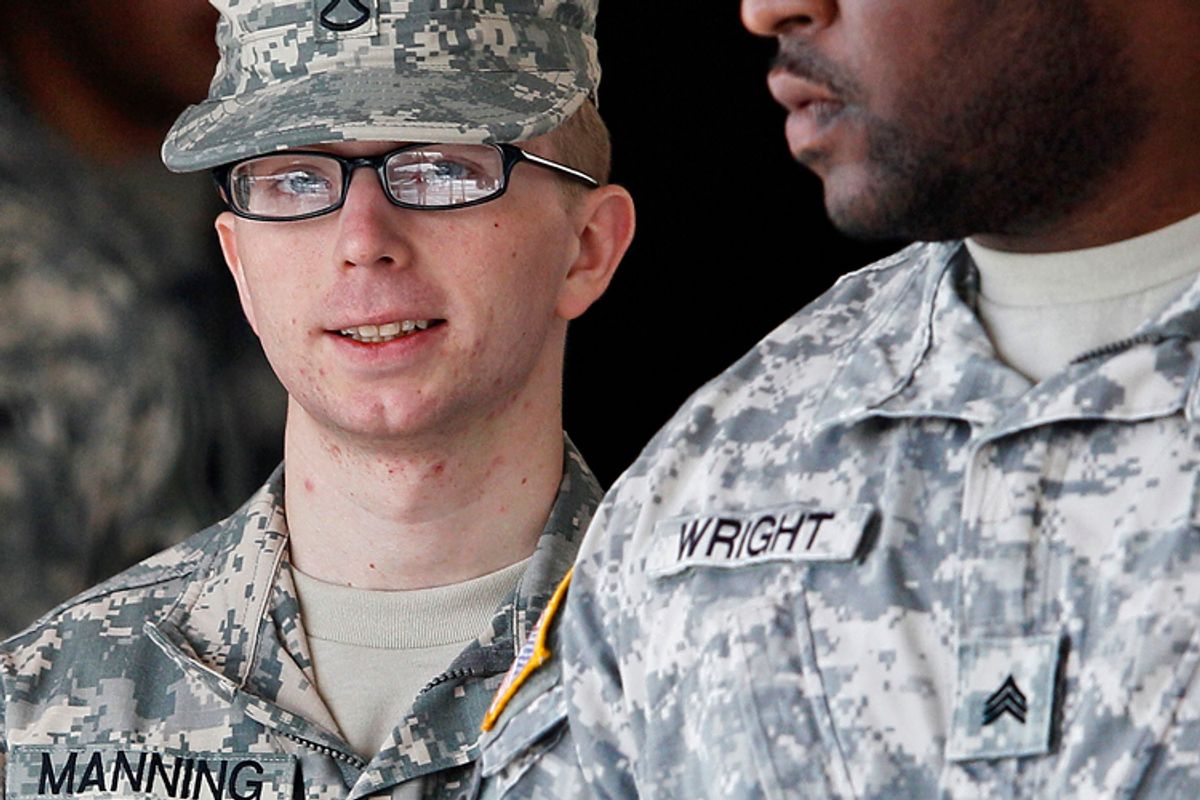 (This piece was originally posted at Firedoglake.)

The pre-trial hearing for Pfc. Bradley Manning, accused of releasing classified information to WikiLeaks, concluded with the government revealing in its closing argument for the first time the enemy, which they believe Manning’s actions aided: the terrorists.

Calling what Manning did a “six month-long enterprise of indiscriminately harvesting information,” Capt. Ashden Fein stated in the prosecution’s closing argument that Manning had actual knowledge that what he gave to WikiLeaks would end up in the hands of the enemy and that enemy was Al Qaeda, Al Qaeda in the Arabian Peninsula (AQAP) and similar enemies.

An Al Qaeda propaganda video was shown. The video, with subtitles, featured a figurehead of the organization discussing the released information, like the State Department cables. The figurehead said the cables revealed “foreign dependencies.” He said something about relying on Allah for actions against the United States and then said before taking actions jihadists should rely on the “wide range of resources on the Internet” now.

Fein asserted that AQAP is “urging followers to collect and archive WikiLeaks information.” Manning “knowingly gave intelligence through WikiLeaks to the enemy.” He “wantonly caused the release of this information.” It was “not just good for declared enemies” but also accessible to “all other enemies with Internet access.”

Manning, Fein added, released over 700,000 documents that were on SIPRnet “during a time of war and while deployed.” He was “never authorized to make classification decisions to affect the national security of the United States.” He was given “unfettered access” to the information and “multiple enemies received” this information.

Now, it is clear: the effect of Manning’s prosecution has the potential to criminalize national security journalism. Not only would successfully putting Manning in prison for life without parole make an example for other soldiers to deter any others from responding to their moral conscience if they came across files that contained evidence of possible war crimes, but this would make it possible for the government to go after journalists who cover documents from the military or security industrial-complex.

This also cements the fact that WikiLeaks is viewed as a terrorist organization by the US government (or at least one that aids terrorist organizations through the publication of classified information). Anyone who releases information to WikiLeaks can count on being pursued by the government and, when caught, charged with “aiding the enemy”—terrorists, because they have access to the Internet and could read material that was once-secret.

Unsurprisingly, the defense’s closing argument given by David Coombs sharply contrasted with this rather incendiary condemnation of Manning. Coombs presented Manning as a “young and idealistic” man with a “strong moral compass."

He wholly condemned the government’s overreaction to the release of documents by WikiLeaks and their insistence that the documents have done “extreme harm” and so Manning must pay with his life.

“What was the result of these leaks?” Coombs asked. It would be possible to know if the original classification authorities (OCAs) had been in court to testify. They were not. They instead submitted “unsworn statements” indicating “relevant information could cause harm.”

“The sky is not falling and the sky will not fall,” declared Coombs.

Moments before calling out the OCAs, he spoke of the profound suffering Manning had been experiencing as a member of the military who had gender identity disorder. He cited an email to Sgt. Paul Adkins, who escaped testifying during the hearing by invoking his right to not incriminate himself.

All throughout the hearing this email was frequently referenced because it included a photo of Manning dressed up as a woman. For the first time, Coombs read what Manning had written to Adkins.

“This is my problem. I’ve had signs of it for a very long time. I’ve been trying very, very hard to get rid of it.” It is not going away. It is haunting me more and more as I get older. Now the consequences are getting harder. “I am not sure what to do with it. It’s destroying my ties with family. It is preventing me from developing as a person. It’s the cause of my pain and confusion. It makes the most basic things in my life very difficult. He said the only help that seems available is severe punishment. “I have a fear of getting caught” and have gone to “great lengths to conceal my disorder.”

The email continued: “It is difficult to sleep and impossible to have conversations. It makes “my entire life feel like a bad dream that won’t end. “I don’t know what to do. I don’t know what will happen to me. But at this point I feel like I am not here anymore. Signed, Bradley Manning.”

Coombs appropriately concluded by paraphrasing a quote many attribute to the late Justice Louis Brandeis, “Sunlight has always been the best disinfectant.”

An individual who breaks a law that conscience tells him is unjust, and who willingly accepts the penalty of imprisonment in order to arouse the conscience of the community over its injustice, is in reality expressing the highest respect for the law.

“[A] hallmark of our democracy is the ability of our government to be open with its public,” Coombs stated. “History will ultimately judge my client.”

This was the first clear instance during the entire hearing that Coombs conceded that Manning had, in fact, released the information to WikiLeaks, but the government should not get away with prosecuting Manning because he was simply doing what he thought to be just. And there is no justification for persecuting someone, who sought to raise the public’s awareness of gross injustices, and move the government to effectively resolve and end an era of corruption and lawlessness under President George W. Bush’s administration.