The fake "War on Christmas" outrage 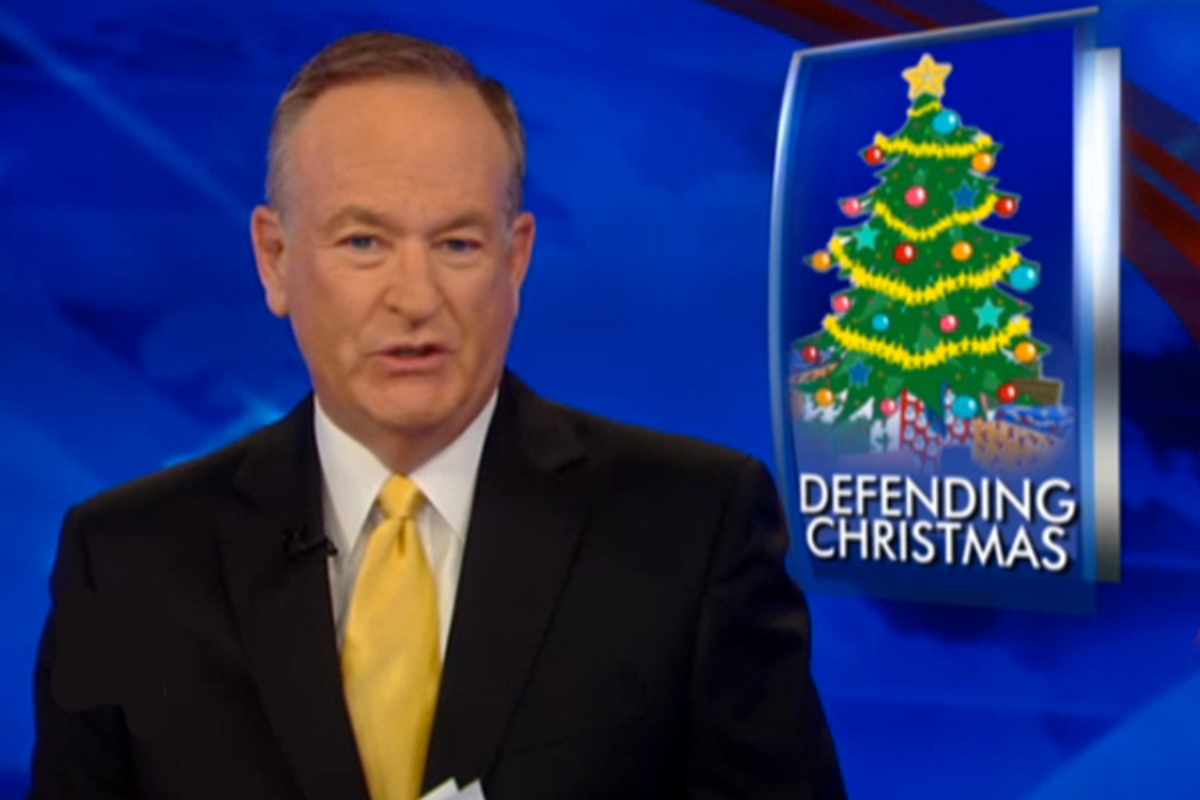 One of the defining qualities of late December is the predictable and ritualized nature of America's holiday season. Other than discovering what's inside the wrapped gift boxes, there's no mystery or suspense to it anymore. The Christmas music starts right before Thanksgiving. Then come the flickering lights, the red-and-green decor, Hollywood's vacation movie blitz, and finally, with media charlatans turning the key, the fake outrage machine rumbles back to life.

Like a narcissist's souped-up 4-by-4, this turbocharged colossus of self-righteous indignation makes a lot of noise and leaves a mess in its wake -- but ultimately says a lot more about its drivers' pitiable insecurities than anything else.

This year has been particularly illustrative, as the fake outrage machine has caricatured itself like a Bigfoot-esque monster truck in a desperate bid for attention. In just the last few weeks, the Heritage Foundation billed an Agriculture Department initiative to raise revenue for tree farmers as a "Christmas Tree Tax"; Fox News said that standard federal safety warnings were proof that the government wants to "tell you how to decorate your Christmas tree"; and conservative activists criticized Rhode Island Gov. Lincoln Chafee, an Independent, for daring to consecrate a "holiday tree" -- rather than a "Christmas Tree" -- at the statehouse.

Meanwhile, under the headline "‘Modern Grinches Step Up Anti-Christmas Efforts," the Christian Broadcasting Network lashed out at cities for trying to respect the separation of church and state at holiday time, and the American Family Association continued its annual effort to denigrate companies that substitute "Happy Holidays" for "Merry Christmas."

To know that this machine's outrage is indeed fake is to appreciate some telling facts about the alleged transgressions. For instance, the government's recent revenue and regulatory moves were entirely routine and nonreligious, while Gov. Chafee was just preserving a long-standing tradition in a state founded as a haven for religious pluralism. Similarly, many cities are still including Christmas in their winter festivities -- they are just including other celebrations as well. And if saying "Happy Holidays" somehow represents a "War on Christmas," then none other than Christian icon Tim Tebow must be one of the aggressors' lead field generals, what with the NFL quarterback now appearing in a television ad wishing Coloradans "Happy Holidays" -- not "Merry Christmas."

These facts, of course, are no deterrent to the fake outrage machine, because the machine's operators aren't really interested in preventing religious bigotry. In a majority-Christian nation whose politics and culture are steeped in Christianity, these zealots are interested in pretending their fellow Christians are somehow oppressed, contradictory facts be damned.

In propagating such an illusion, they’re not earnestly embodying their religion's missionary spirit. Instead, they’re manufacturing victimhood, all to gin up sympathy and create a rationale to continue ramrodding their theology down everyone else's throats.

That some feel this need to push their faith with such craven tactics speaks volumes about the nature of spiritual self-doubt today. Sure, our tumultuous world of bombast and chaos leads us to assume that the loudest are the most devout. But in practice, those who are truly comfortable in their faith are often the most humble about their orthodoxies because they have nothing to prove. By contrast, those who are the most insecure in their beliefs can sometimes be the most in-your-face about their dogma.

In that sense, there's a "doth protest too much" tenor to the roar of the fake outrage machine. That self-indicting message may be difficult to detect amid all the exploding ordnance in the War on Christmas, but it's there -- and the more the machine revs its engines every December, the more that message comes through.