Throughout much of history, the holiday was a celebration of rebellion against authority. It\'s time to reclaim it 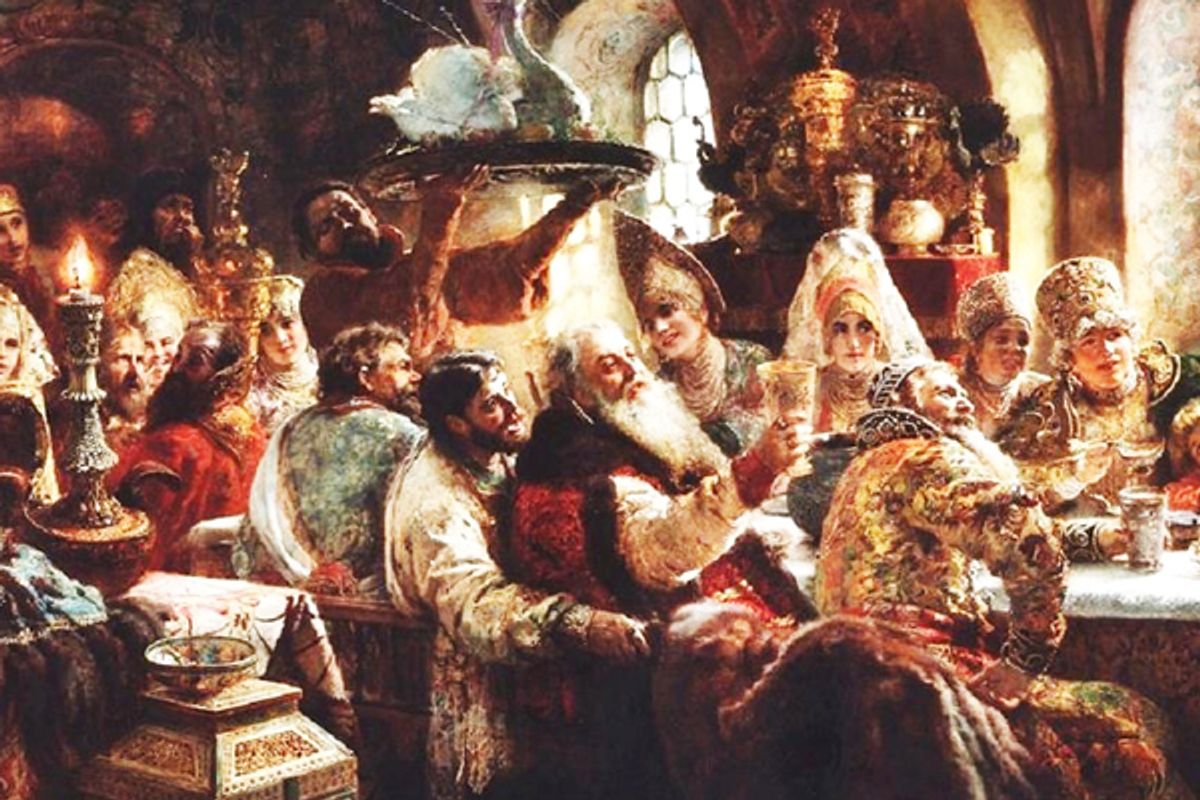 Christmas has always been politicized. Since 2005, when Fox News commentator John Gibson published "The War on Christmas: How the Liberal Plot to Ban the Sacred Christian Holiday Is Worse Than You Thought," the focus has mainly been on a supposed progressive agenda to, in the words of Bill O’Reilly, “get Christianity and spirituality out of the public square." Last year the New York City YMCA drew criticism for replacing Santa Claus with Frosty the Snowman at a family event — children were forced, complained the New York Post, to “suffer the icy embrace of a talking snowman” instead of the warm hug of a fur-clad fat man. This year the American Family Association has once again called out retailers who favor the word "holidays," placing them on its “Naughty” list.

But there is also something different going on this year. A popular hashtag on Twitter is #OccupyXmas. In Portland, San Francisco and elsewhere, carolers dressed in Santa suits and elf outfits have been singing a new song. It goes in part like this:

You crashed the whole economy

Yet nothing did you pay ...

Through the centuries a spirit of rebellion has often colored the Christmas season. There is good historical precedent for thinking of Santa Claus and Christmas itself as icons of the 99 percent movement.

Next to nothing is known about Saint Nicholas, a Greek who was the Christian bishop of Demre, a town on the southern coast of Turkey. As Christianity expanded northward he became a palimpsest — a symbol that could be invoked for any variety of causes, such as the welfare of children. According to one persistent legend he was a member of the affluent 1 percent who became disturbed by prevailing social inequities and sought to redistribute wealth to the less fortunate. Through the centuries the notion of wealth redistribution would be associated with the saint, and with Christmas.

The Catholic calendar assigned feast days for celebrating its saints, and Nicholas’ day was Dec. 6 — the same month in which the church had placed Christmas. While the actual date of the nativity (which was not celebrated until centuries after Christ’s lifetime) was unknown, assigning it to the winter season enabled the church to co-opt ancient midwinter festivals. Because of their shared season of observance, St. Nicholas and Christmas became associated with each other.

In the pre-modern era, once the fall harvest and slaughter season had been completed agricultural workers found themselves with time on their hands and a bountiful supply of fermented beverages. Rowdy celebrations were one result. An antiauthoritarian strain ran through these winter rituals. The Christmas season was a time of  what the early-20th-century literary theorist Mikhail Bakhtin described as the spirit of carnival. A master of revels, called the Lord of Misrule, might be appointed or selected by chance (for example, by discovering a bean hidden in a cake) to govern over festivities in which the high and low exchanged places. At this time the wealthy were expected to provide food and drink for common folk. The ritualized disorder provided a kind of annual safety valve against smoldering class resentments and grievances.

By the early seventeenth century, when urbanization, technological advance, and new cross-cultural connections were transforming the old social order, the safety valve stopped working. The king of England, James I, was concerned that such developments as sprawling urbanization and the disturbing outspokenness of women were eroding traditional values. He commissioned his chief propagandist, the playwright and poet Ben Jonson, to create a performance called "Christmas, His Masque," to be presented around Christmas Day, 1616. This play would mark the first literary appearance of the prototype of Santa Claus, called Father Christmas. Jonson described him as “attir’d in round Hose, long Stockings, a close Doublet, a high crownd Hat with a Broach, a long thin beard, a Truncheon, little Ruffes, white Shoes, his Scarffes, and Garters tyed crosse, and his Drum beaten before him.” Accompanied by his 10 children (Mis-rule, Carroll, Minc’d-Pie, Gamboll, Post and Paire, New-Yeares-Gift, Mumming, Wassail, Offering, and Babie-Cocke) he appealed for a return to “a right Christmas, as of old it was.”

"Christmas, His Masque" was intended to encourage people to resist the enticements and corruptions of modernity and return to traditional values in the hope of restoring the more stable social order of earlier times. At the same time, it sought to check the growing influence of religious hard-liners such as the Puritans, who opposed the celebration of Christmas. In this it failed—within a generation the monarchy would be overthrown, to be replaced by the religious extremists.

The Puritans, who rejected ceremony in favor of direct communion with God, were opposed to all of the old seasonal celebrations. They also objected to the license and disorder of the winter festivals. Among the practices they took exception to during the Christmas season festivities was cross-dressing, a vestige of ancient winter saturnalias. Role reversals were a common feature of the winter celebrations: the fool would be king for the day, peasants would temporarily command the wealthy, men and women would exchange roles. According to a minister writing in the early 1700s, Christmas mumming often involved “a changing of Clothes between Men and Women; who when dressed in each other’s habits, go from one Neighbor’s house to another ... and make merry with them in disguise.” The merry making involved the objectionable habit of caroling, which, the minister said, occurred “in the midst of Rioting, Chambering [fornication], and Wantonness.”

The Puritans brought their opposition to Christmas to the new world. Suppression of Christmas began in the first year of the Plymouth Rock colony, when its governor came across some revelers who had taken Christmas day off and forced them to return to work. The observance of Christmas was declared a criminal offense by the Massachusetts General Court in 1659.

My own great-great-great-great-great-great grandmother, a woman named Dorothy Jones, was convicted in the town of Wilmington, near Philadelphia, in 1672 of "propagating ye Throne of wickedness." According to court records, she was charged with “masking” in men's clothes the day after Christmas, "walking and dancing in the house of John Simes at 9 or 10 o'clock at night.'" Simes, who hosted the party, was charged with keeping a disorderly house, "a nursery of Debotch ye inhabitants and youth of this city... to ye greef of and disturbance of peaceful minds.”

As the old winter festivities became repressed they turned more bitter and vehement. Christmas carolers, or wassailers, asserted their right to seasonal largess with the threat of violence. A Scottish wassailing song contains such lines as

And if you don't open up your door,

We'll lay it flat upon the floor …

God bless the mistress and her man,

Dish and table, pot and pan:

Here's to the one with yellow hair,

She's hiding underneath the stair:

Be you maids or be you none,

Although our time may not be long,

You'll all be kissed ere we go home.

Young men from the fringes of society formed bands who went from house to house demanding gifts of food and drink. One wassailing song asserted the petitioners’ right to sample the lord’s best goods and not just ordinary stock:

Come, butler, draw us a bowl of the best

Then we hope your soul in heaven shall rest

But if you draw us a bowl of the small

Then down will come butler, bowl, and all

If the petitioners were not let in, they would sometimes enter homes by force. On Christmas night of 1679 one landholder near Salem refused to grant the demands of such a gang of young men. His case is known through the court record it has left; it is retold in Stephen Nissenbaum’s excellent "The Battle for Christmas." After his refusal, he testified, “they threw stones, bones, and other things ... They continued to throw stones for an hour and a half with little intermission. They also broke down about a pole and a half of fence, being stone wall, and a cellar, without the house, distant about four or five rods, was broken open through the door, and five or six pecks of apples were stolen.”

The colonists succeeded, with difficulty, in suppressing Christmas for a time, but immigrants to North America from other parts of Europe (such as Germany, the Netherlands and Scandinavia) continued to bring their various seasonal traditions with them. With a more diverse populace, by the beginning of the 19th century Christmas was on the way to revival. It emerged from its years of suppression in a new form. Since each group observed the holiday in its own way, it no longer took the form of a rowdy public festival, gradually becoming transformed into a quieter domestic observance.

Gift-giving had not been a feature of traditional Christmas celebrations, which had emphasized feasting and drinking. But over the course of the 19th century, with the growth of industrialization, as manufacturers looked to develop new markets, the holiday became commercialized. Though some employers, like Dickens’ Ebenezer Scrooge, still saw it as a kind of scam, when he was forced to “pay a day’s wages for no work,” others made a different calculation — they saw the momentarily idle workers as a potential market for their products. By the end of the century, it became customary in the U.S. to purchase and exchange manufactured goods at Christmastime.

In the end it was probably a bad deal for the workers. What was once a worker-oriented festival had been subsumed into an economic system that in recent years has resulted in staggering levels of economic inequality. “My little girl don't understand why Daddy can't afford no Christmas here,” Merle Haggard once sang. Today, as SantaCon meets and mingles with the Occupy movement, people are again demanding a better share of the wealth during the holiday season. It might be wise to take their protests seriously. There are centuries of tradition behind them.

Thomas Christensen’s "1616: The World in Motion," an illustrated study of travel and cross-cultural connections in the early seventeenth century, will be published by Counterpoint Press in March 2012.