It's a new tradition -- generations around a game console. For 25 years, families have shared "The Legend of Zelda" 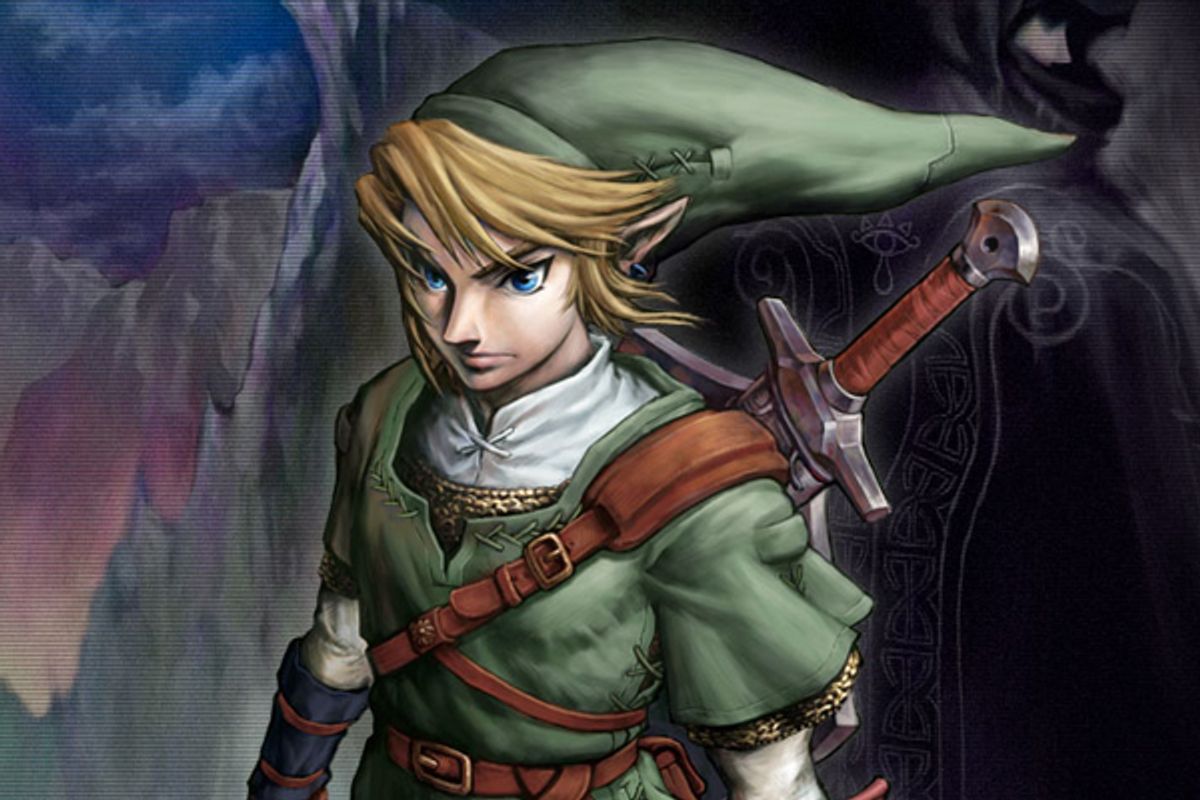 The legend goes like this: As a boy growing up in Japan, Shigeru Miyamoto was playing outside and discovered a cave. The cave haunted the child, who loved comics and dreamed of becoming an artist, but he was too afraid to go explore. Pained days followed, and the boy tried to summon the courage to see what was hidden. As we all do eventually, however, Miyamoto finally faced his fears. He went inside -- and it helped change the way we all play.

Thirty years later, Miyamoto defined video games during a period of remarkable creativity. He gave games their first story in "Donkey Kong": Ape kidnaps lady, climbs a building, mustachioed fella rushes to save her. It's a classic boy-rescues-girl plot, but before "Kong," games only had beginnings and endings in the sense that a challenge was completed or not. "Kong" had a story arc -- and gave birth to games' most enduring icon, Mario.

But it was that cave that inspired Miyamoto's definitive work, "The Legend of Zelda." The game celebrates its 25th anniversary this year, and no doubt it is under more than one Christmas tree today. Someone in your house might be playing right now. It's become one of the most enduring and popular games of all time; while it wasn't the first to set players loose in a world without direction, "Zelda" was the first to make adventure games easy to understand.

"The Legend of Zelda's" very first screen shows a child in a floppy green hat, a boy named Link. There are paths to the west, east and north, but none to the south. There is also -- of course -- a cave. There is no option to go back. The best option is the one Miyamoto feared as a child -- heading into the cave. Maybe there will be something you can use? Inside, an old man hands over a wooden sword and advises, "It's dangerous to go alone! Take this." He isn't offering to join you. He's just reminding you that it will be dangerous out there all by yourself.

That first outing was a revelation, an experience that pointed toward just what kind of story games would be best at telling: There were goals, but you would discover them at your own pace, in a countryside that was surprising and unpredictable. There were forests to get lost in, mountains that didn't end, old women in burned-out hollows selling potions to keep you alive in desperate situations.

As "Zelda" games are opened today, generations will share a holiday tradition that has become as much a part of Christmas as tossing a football once was -- playing video games together. I will be 35 when Nintendo releases the next "Legend of Zelda." I was 4 when the first came out. Once I played with my brothers. Now I play as a husband, and soon it will be with a family of my own.

But while my life has changed, "Zelda" remains recognizable, which is one of the reasons these games hold so much cross-generational appeal. The kids who opened "Zelda" games two decades ago are parents and aunts and uncles now -- but still know their way around a video game. And "Zelda" comes right back -- it will always be about an elfin gentleman in a green tunic who crosses the world using a variety of tools and a blue-hilted sword to rescue a woman from a malevolent force. It will likely sport rousing music and a long quest. Not for the first time over the past quarter-century, I will have changed and "Zelda" will have stayed exactly the same, waiting to beguile some unsuspecting fourth-grader for the first time.

"Zelda" has evolved; there's a good reason why, even as the average game player's age has risen above 40, "Zelda" has remained a beloved institution and not just a tired nostalgia trip. Even as the series has become a traditional, seemingly wholesome stalwart in a medium increasingly known for guns, guns and more guns, it has also managed to grow alongside its audience in quiet, meaningful ways. People continue to play "Zelda" because it speaks to both the 6-year-old and the 30-year-old. What's changed in the latest entry, "The Legend of Zelda: The Skyward Sword," is that it speaks more lucidly to the 30-year-old than it ever has before.

Miyamoto and the series' other stewards, including longtime producer/director Eiji Aonuma and composer Koji Kondo, have always insisted that any narrative ties between the various editions are more treats for fans than the foundation of a thorough, evolving story. The games are called legends on purpose, making each new game part of an interactive, oral tradition. Here is the way it was told to me when I was a boy, etc.

In "Skyward Sword," the most recent telling, Link is a young man living on the floating island of Skyloft, a community of bird-riding people who haven't lived on the ground in thousands of years. Things get underway when Link graduates from the knight academy alongside Zelda, daughter of the school's headmaster and Link's lifetime friend. Ceremony complete, Zelda and Link take off for a joyride on their giant birds. The two are caught off guard by a massive tornado; Zelda is thrown to the lost world below the clouds and Link is knocked unconscious. When he comes to and finds Zelda mixed up in world-altering troubles, he heads off to find her.

The quest is familiar. Link's been saving Zelda for 25 years now. When Link hits terra firma, he's told by an oracle to seek out Zelda in a variety of ancient temples hidden away in lava-ridden mountains, dense forests and wind-blown deserts. All of these locations are rich with implied history and feel lived in. Link collects a variety of tools, meets colorful characters anxious to help, and the world below unfolds like a complex, organic puzzle box, a place that slowly reveals itself as you can further access it, whose inner compartments are new puzzles themselves.

These components make up the childhood fantasy that has kept Zelda so entertaining over the years. It's a process of private discovery and problem solving. It's backyard play by design, a lush, animated version of discovering that cave in the woods and then finally daring to go inside. "Skyward Sword" is as rewarding in this regard as any of its predecessors, but something is different.

"Skwyard Sword" draws Link into its community more than any other "Zelda." You're drawn in as well. Link, after all, is nothing more than a proxy for the player in "Zelda's" world. It's why he doesn't speak, even now when most video-game characters never shut up. "The most important thing about the 'Zelda' series," says composer Koji Kondo, "is that the player becomes Link."

"Zelda" has never been a totally solitary experience. All of the games since 1988's "Zelda II: The Adventure of Link" feature towns filled with citizens who need help with all kinds of things. In all of them, however, you aren't a part of the town's day-to-day life; you're just a journeyman passing through. The town is there to be a home you leave at the outset of your adventure. The moment of growth comes from what's discovered outside, not from what's learned at home. In "Skyward Sword" you never fully leave home. You fight an evil monster and save the world, but these tasks are secondary to mending your broken community and bringing your loved one home.

It's a decidedly adult goal for what used to be an engrossing but simplistic fantasy. It's about responsibility as much as progress. The relief and tenderness of Link's reunion with Zelda carries more weight than it would if the boy saved an idealized princess, or if the infatuated teen is brought back together with his girlfriend, or any number of other pairings. The story here still offers the wandering freedom of that game of caves from 1986, but now there are consequences. Life beyond you goes on, both during and after the quest. So "Zelda" is again a benchmark. Where it proved back when that video games could tell a story that was as much yours as it was the author's, now it points to how there's room for more than adolescent fantasy inside the would-be book bindings. The adolescent thrills are still there, of course. They just sit alongside something that speaks to a set of experiences that run deeper than just daring to go into the cave.

I first beat "Zelda" when I was just 6 years old, and, apoplectic with joy, I was nearly hit by a car when I ran outside to tell my brother. Back then, Zelda was not something I shared with my parents, it was not a tradition to be passed on. It was about the newness of discovery. Twenty-five years later, video games are something that mothers and fathers pass on to their children, the way they once shared Beatles albums.

"Skyward Sword's" caves are still bewitching, but the world outside is a complex place worth living in. It has a past that sits heavy on people's shoulders, and they survive by relying on one another. Kind of nice to imagine all the relying going on today.