How to argue with right-wing relatives

Responding to common conservative talking points without losing your mind 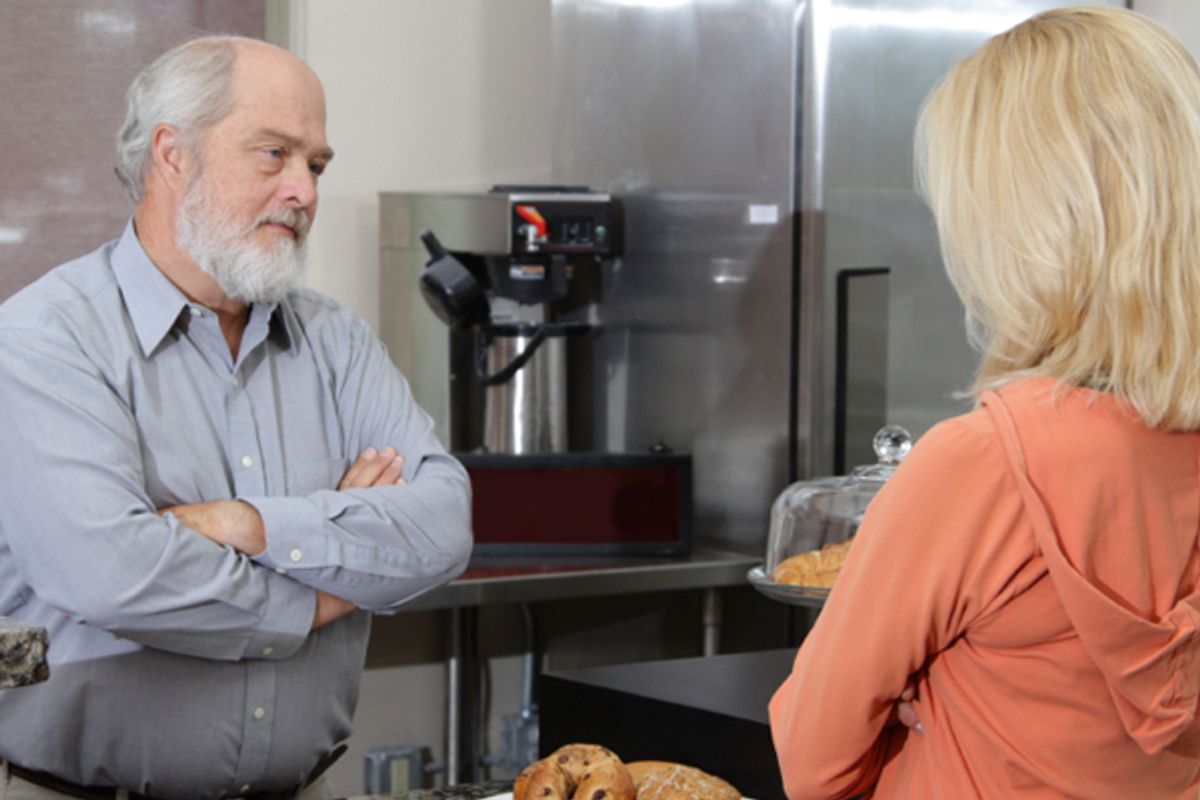 There comes a time at most large family gatherings when a heated political argument breaks out. And by "heated political argument" what I mean is "someone just repeats something they heard on Hannity's radio show that you know to be completely untrue." You may be the lone liberal in a conservative family, or you may have one right-wing uncle in your left-wing family, but this will happen. What to do?

If you have a "smart phone," just bookmark Snopes now. That'll take care of the really weird stuff. (Well, not this level of weird, but "I read that airlines don't pair Christian pilots and co-pilots in case The Rapture happens" weird.)

But a right-wing myth generally lives on forever, no many how many times it is debunked. You are powerless to prevent its spread. All you can do is perhaps convince one person that one talk radio meme is completely bogus. But you will probably have better luck simply changing the subject. (Suggestions: Whether or not Peyton Manning will be a Colt next season, "American Horror Story," Jay-Z and Beyonce's baby.)

If you insist on answering back, here are some suggestions.

First, the immigration status of Barack Obama's aunt Zeituni Onyango (the half-sister of Obama's father, from whom the president was estranged for much of his life) was leaked to the press just before the 2008 election. She eventually won asylum, because she is old and sick and Kenya has recently seen a rise in political violence. "Uncle Omar" is in the news because he was recently arrested for drunk driving, and it turns out he's lived here since 1963 and been in violation of a deportation order since the early 1990s. Mitt Romney accidentally said he'd deport him, but then Romney sort of walked that back, because he's Romney.

Just ask what exactly is moral or beneficial to American interests in sending an old woman who is related to the United States president to a nation where she could be a target of politically motivated violence. And whether or not an appropriate punishment for drunk driving is to be sent "back" to a foreign country that you haven't lived in in half a century. Then add that these cases have nothing to do with the president beyond involving people he is distantly related to, because the White House has never sought special treatment for either of these people. Then ask your relative if they really want these two people to go have to live under SHARIAH LAW, because why not.

That probably won't convince anyone so maybe now would be a good time to bring up your own family's ethnic heritage, unless you all happen to be American Indians.

Food nazi Michelle Obama is forcing children to eat vegetables even though she herself is fat and enjoys hamburgers.

"Have you ever noticed that pretty much everyone with a creepy fixation on the first lady's fitness is a fat old white guy?"

Excessive regulation/regulatory uncertainly is killing the recovery, that is why there are no jobs!

Look, you can print out some lame chart from Ezra Klein or memorize some "statistics" about Obama not issuing any more regulations than other presidents, but those won't help, because numbers and charts lie about everything. This is basically just a stand-in for the entire incomprehensible right-wing narrative of the ongoing miserable economy. Your best bet is just to say that it's criminal that no Wall Street executives went to jail for fraud (unless your familiarly includes lots of Wall Street executives, in which case my only advice is to steal the silver on your way out).

Barack Obama disrespected the U.K. by sending it the White House bust of Winston Churchill.

Sure, the "correct" answer is that presidents change the decor when they move into the White House, but I'd just say, "Winston Churchill was a raging racist drunk asshole," because he was.

Sarah Palin insinuated that the Obamas' Christmas card -- which features wrapped presents, poinsettias, garland and bows -- is part of his secret Muslim plot to destroy Christmas, because the card featured Bo the dog rather than "family, faith and freedom." I'm not sure what you say to this, actually, because at this point you're dealing with a lunatic, but if there are Christmas cards from loved ones nearby, maybe go check and see how many of them explicitly feature "family, faith and freedom."

Solyndra was a solar company that got a loan guarantee from the government and then it went bankrupt. Conservatives say this means the government shouldn't try to support things that it thinks are good ideas because the government is a lot worse at "picking winners and losers" than the private sector, which never loans money to companies that then go bankrupt. I dunno, the "scandal" here is pretty opaque. I'd recommend trying to get someone to explain, to you, what exactly happened that was so illegal or whatever. Basically, the review of this loan guarantee to this poorly managed solar company with political connections was rushed, and someone might have asked them not to lay everyone off until after the midterms, which is pretty stupid, but honestly much less stupid than spending $4 billion on subsidies for oil and gas.

Eric Holder must resign because of "Fast and Furious."

"Fast and Furious" was such an epically stupid and awful idea that you shouldn't bother trying to "defend" it (though if you care you could point out that there's still no evidence that Eric Holder knew about it) -- you should instead congratulate your relative on finally coming to his senses regarding the ridiculous counterproductive drug war. We can finally all agree that the government should find better things to do with our tax dollars!

Tell your relatives that you have recently joined the New Black Panther Party. They will be too terrified to bring it up again!