The final moments of Steve Jobs 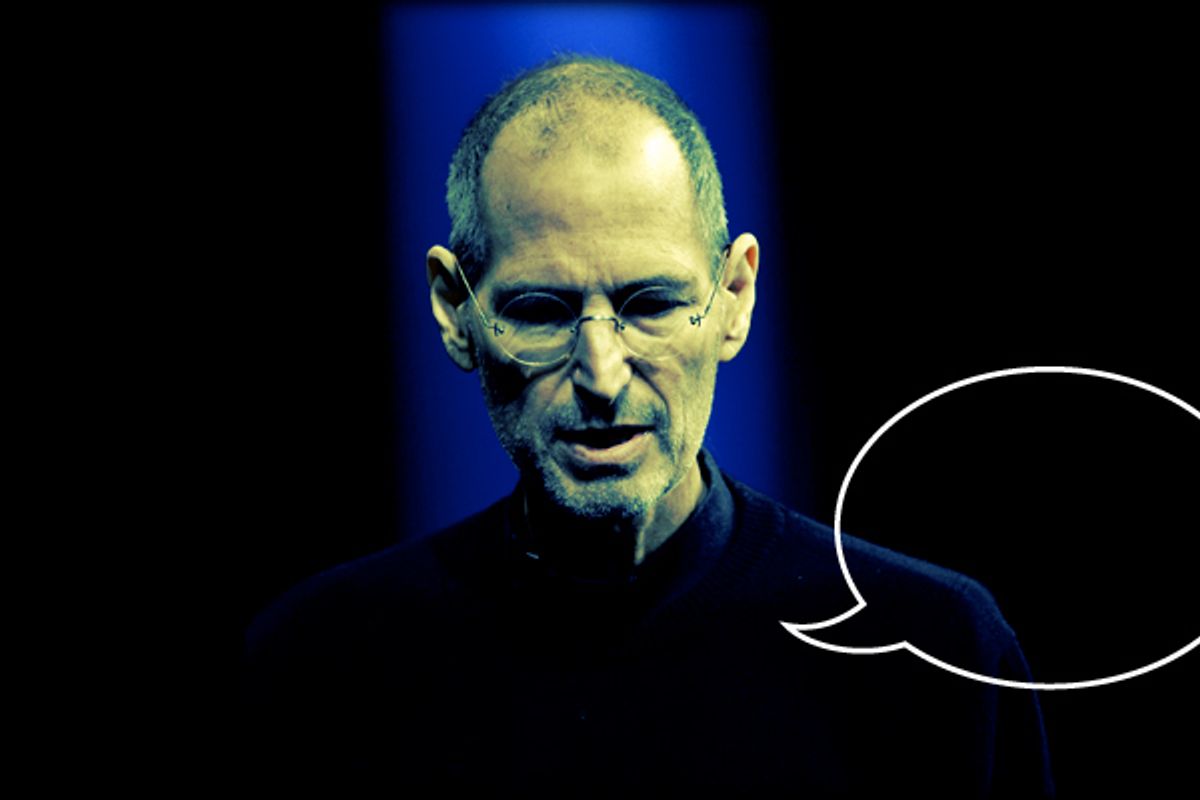 On this, his final evening, while the family holds vigil in the living room of the Palo Alto house, sipping tea and cocoa and organic white wine from Napa, checking their email, sometimes, clocking their texts, all those real-time gestures of solidarity, Steve allows his eyes to close, allows his mind to hop from this dream to another. They won’t notice the change taking place in his body, not till later, and by then he’ll be gone, inaccessible again, in another meeting, his phone on mute as he tinkers with one last imperfect machine.

There’s a box -- that’s all he sees at first, a box -- and inside this box, leaking from the seams, a light, soothing, rejuvenating. All else is darkness.

The box opens and a room is illuminated, alternating plates of brushed steel and plastic. Wozniak is there. And his father, his real father, Paul, not that trickster slob whose sperm triggered his existence.

They stand over the box, beckoning. “Check it out, Steve. What do you make of this?” They hoist out a computer -- an old clunker, heavy, huge -- and balance it precariously on Woz’s knee. It’s a model he knows well. An embarrassing machine, really, limited by the time and place of its creation, by the faults of its creator and the second-hand components, scraped up from Syria, Wisconsin and Germany, that had been used in its conception.

“I don’t know how this thing wasn’t on our radar,” Woz says. “It’s beautiful for its time. Ever seen it before? Any idea who made it?”

It hurts him just to look at it again, and he wonders where they found it -- he’s never shown it to anyone, never even spoken of it. He’s kept this one a secret, even from them.

His father, the machinist, is probing, peering, flicking his talented fingers against the wall of the hard drive. He pulls the rest of the components from the box, the monitor, the keyboard. He untangles the wires and orders them by length and thickness. Steve hasn’t seen him in years. He’s missed those hands. The way they pick and probe. The confidence, the feel for the way things work contained in them. This man and his hands taught him something essential, an existential truth, how anything, even the most useless crap, can be coiled and soldered and screwed into place until it’s been transformed into a new and wondrous thing. This applies to more than metal, plastic and glass. People can be rebuilt too. He’s seen it. He’s proof of it. The broken child he had once been was molded into the person called Steve by this man.

“Let’s pop this baby open and see what it’s made of,” his dad says. It’s nice to see the old excitement back on the old man’s face. Though he wants to, Steve can’t say no.

Woz is already at it with a screwdriver. He and Steve’s father are kneeling on the floor, pulling the pieces apart from each other. It’s just like the old days in the garage, taking things apart just to see how they work, just for the rush of learning the system so well that you disappear inside it, become extensions of it, pulses of energy sparking in parallel with the machine. But here, now, with this machine, Steve can’t muster the spirit. He knows what they’ll find. He’s been inside this box before, in a different realm, a different lifetime. He first encountered it in India, in Himachal Pradesh, up in the thin air of the Himalayas.

That day in Himachal Pradesh: lying on his back in a dry riverbed, staring at the cold, cold mountain sun -- pulsing, deathly white -- waiting for the ocular distortion to begin, for the doors of perception to crack open for him. Octagons of color floating on his retinas. The riverbed filling up with water, icy and impossibly clear. A sense of rising up. Then a tickle in his gut, just above his intestines, an internal itch. Steve had scratched and scratched and scratched and scratched the skin open. He was calm as he did this, fascinated by what he’d find. Blood poured out, then his internal organs -- slippery, silvery.

He wallowed in the stuff that was him. Washed it clean in the holy Himalayan water. He was made of tubes and wires, circuitry, spongy motherboards. Interesting. He put the pieces together and cased them in chrome. A current snaked through the water, and it lit up his system and for a brief breathtaking moment, he was able to be himself and see himself simultaneously. He held himself up to the light and peered -- such marvelous symmetry, such perfect design.

This wasn’t the first time he’d done acid. He understood the tricks it played on your mind. He knew that no matter how vivid and tangible the experience, there’d be no way to drag it across the threshold into the world of others. The beautiful machine he held in his hands was both real and unreal. It was and it wasn’t. And this thought, this flash of sobriety, started the machine buzzing and smoking, burping rancid sulfur -- something was shorting it out. He felt it in his spleen, his liver, his kidneys. The machine was rotting, eating itself alive. There was a flaw in its design that he’d overlooked -- right there in the motherboard, a dark spot of leaking bile where two wires were tangled. The trip took a bum turn. He spent the next six hours tearing the machine apart, searching for and not finding a way to staunch the leak. The more he looked at the thing he’d pulled from himself -- the thing that both was and wasn’t him -- the more convinced he became that the flaw in the design was insoluble. It -- he -- was ill-conceived, crudely made, an epic fail.

Coming out of that trip, he’d found himself surrounded by crackling dried leaves, bare patches here and there where he must have been digging. The vision was gone, thankfully, but the emotions it had stirred remained. That object he’d held in his hands -- it had been such a perfect thing, such a beautiful machine, until the virus or cancer or whatever it had been, the flaw in the design, had buckled inside it. His whole career, the rest of his life, had been spent chasing after the perfection of this machine, trying to pull some of what it was out of his acid dreams and into the real, trying to break down the barrier between the two. But also, running from it, from the intractable faults contained within it, and along with them, his body’s capacity for failure.

And now, here, in this place past the world he’s been dreaming for the past 56 years, this place that’s not quite the next dream, but no longer the last one, Woz, who’s still back there, and his father, who’s moved on, are asking him to root around again in that very machine. They hold up one component, then another, exclaiming over the tightness of the design, the discoveries that whoever created the box made years ahead of its time.

“If we’d had this in our hands back in ’76, we would have saved ourselves decades' worth of work,” says Woz. “Look at how small these magnets are!”

His father, who doesn’t care so much about the electronics of the thing -- his expertise was lasers; his focus, construction --  is less interested in the leaps of technology the box reveals than in the ingenious way the parts are held together. “Nothing’s nailed down. Nothing’s clamped in place. It’s a continuous flow of isolated parts, and yet, when you shake it, everything stays put.”

They don’t see the flaw. Steve will have to show them. He takes the motherboard from Woz. Pretending it’s new to him, he toys with it, puts off the moment when he’ll have to look at the tangled mess that he’s sure is already leaking, the cancer that renders the whole thing useless.

It is beautiful, this creaky old machine. More beautiful than he remembers it being. He wishes it weren’t. The flaw would be less tragic.

When, finally, he turns the motherboard over and trains his eye on the knot of wires at its heart, he discovers that they pass over each other, nothing crossed, nothing tangled, nothing leaking. Each wire floats independent of the others, and the glow, the soothing light he first noticed in this room, seems to be emanating from these very wires.

His father and Woz are squinting at him. They hold their hands in front of their faces, shielding their eyes. “We’re losing you,” they say. “You’re exploding in light. You’ll be disappearing soon.”

It seems to him that they’re the ones who disappear.

He opens his eyes. He’s back in Palo Alto, stretched out on the couch with the family drawn around him. There they are. Mona. Patty. The children. Right where he left them. Lo. He’ll miss her. One day, in some future dream, maybe, he’ll show her the machine. That perfect invention. And look, it’s there too. It’s crossed over with him. It hangs across the room, calls out to him. He can’t take his eyes off it.

And then he ventures off to join it.

Joshua Furst is the author of the novel "The Sabotage Cafe" and the story collection "Short People."