"Would It Kill You to Stop Doing That?" Manners for the modern world 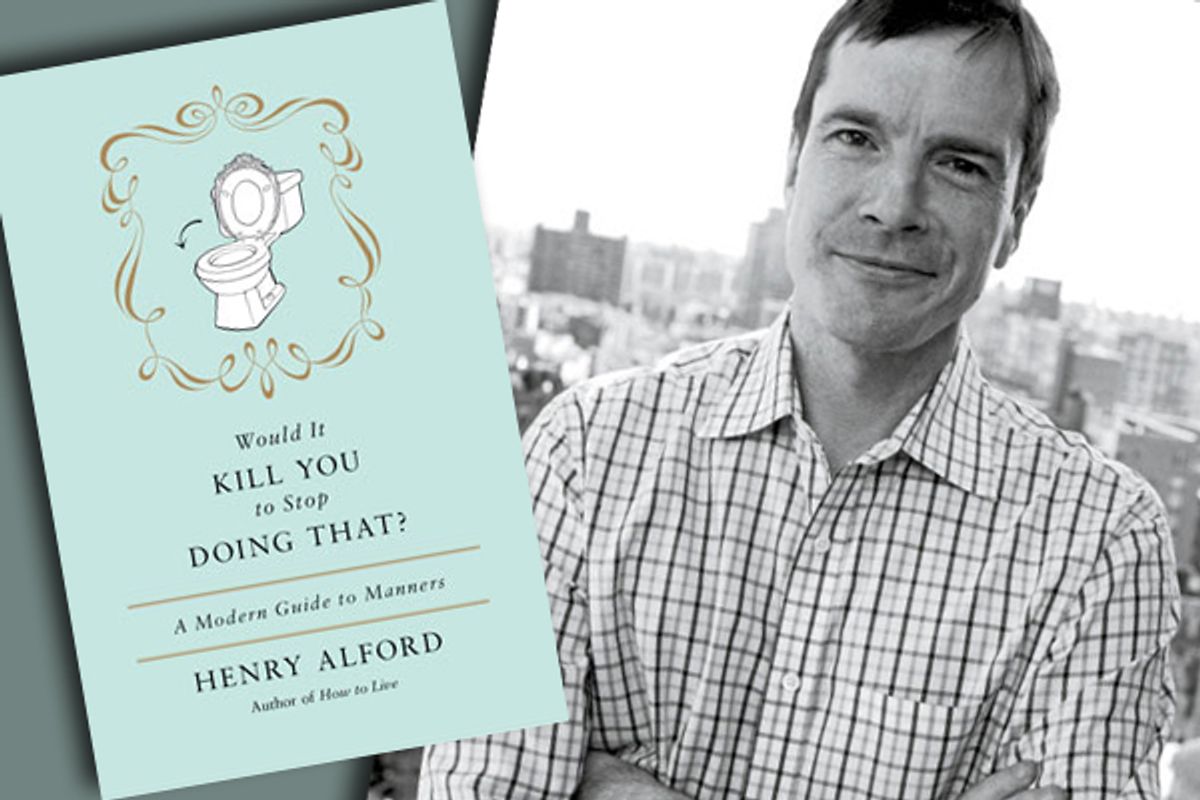 Discussions of manners, like books on grammar, usually fall into one of two categories: advice for the perplexed or displaced -- whether they're wondering how to behave at a haute WASP wedding or grappling with the difference between "who" and "whom" -- and foaming diatribes. Lately, the latter category seem ascendant; to talk about either manners or grammar usually means ranting about the bad behavior of other people, presumably to an eager and equally self-righteous audience. That makes Henry Alford's "Would It Kill You to Stop Doing That?: A Modern Guide to Manners," a bit of an outlier.

Which is not to say that there isn't some unloading in Alford's diverting book, both his own and a selection of gripes collected from friends. The title itself suggests a well-nettled personality pushed to the brink of rage. Still, "Would It Kill You to Stop Doing That?" is that rare consideration of courtesy that admits you can carry the crusade too far. Take, for instance, Alford's one-man "experiment in retaliatory manners," a period during which he apologized elaborately to people who had failed to say they were sorry for such minor transgressions as bumping into him on the street. "I'm saying what you should be saying," he'd then invariably have to explain to these oblivious souls. Eventually, and ruefully, he realized that "reverse apologizing is usually as rude if not ruder than the incident that inspires it."

"Would It Kill You to Stop Doing That?" is, despite its subtitle, not really a handbook, either. If you're hoping to learn whether it's OK to bring a date to a bat mitzvah, you'll be disappointed. Rather, this is a rumination on the philosophy of manners in the form of a series of funny essays by a self-described "investigative humorist." In addition to canvassing his friends for pet peeves -- "People pay you to do that?" is not a civil question to ask anyone who's just told you his profession, folks -- Alford spent three weeks in Japan, observing that "Fort Knox of the World Manners Reserve." He also provided etiquette consultations for people facing particularly sticky social problems and had lunch with Miss Manners and Tim Gunn. (Yes, people pay him to do that -- or, at least, to write about it.)

Rather than laying down a system of rules like such classic authorities as Emily Post, Alford sought to establish the premises on which good manners are based. "Manners," as he defines them, are more fundamental than "etiquette" or "protocol," which vary from culture to culture. Pointing with your finger is rude in Japan, while loudly slurping your noodles is de rigueur. Some African tribes honor visitors by spitting on them. Are there any universals? "I'd like to think that being modest about one's achievements, and taking a newcomer in hand and explaining some of the peculiarities of a new setting to him, are both considered thoughtful acts around the world," Alford writes, but even the appropriate methods for doing either change depending on where you are and whom you're with.

I would also argue that manners can be relative within the mind of a single individual. An anecdote (for anecdotes are the very soul of books on manners): I recently witnessed a man on an elliptical trainer at my gym scold a woman on a nearby machine for taking a (very brief and soft-spoken) phone call that was obviously from a doctor. It's true that cellphone use in that area can be annoying and is therefore prohibited, but this is the same man who favors everyone around him with an angry running commentary on whatever he's watching on TV as he works out. "One of the more curious aspects of bad manners," Alford astutely observes, "is that we almost never think that we ourselves have them." Which is why, when it comes to politeness, the letter of the law matters far less than the spirit.

What Alford finally concludes is that courtesy derives from "imagination" rather than a careful adherence to established rules or even simple empathy. "Good manners," he writes, "are your ability to take on another person's point of view regardless of your own." In that case, taking offense, however much some people seem to enjoy it, can be its own form of rudeness. One woman complained to Alford of being asked, "How long have you been a nurse?" which she interprets as an aspersion cast on her expertise; I say that sick people anxious about the quality of their care should be cut a little more slack. Likewise, it should occur to the testy EMT who hates the question "What took you so long to get here?" that time passes much more slowly when you're scared or in pain.

I confess that I have met Alford briefly and have found him polite, though not extraordinarily so. However, he reports that he volunteers as a New York City tour guide for visiting foreigners, always tries to strike up conversations with people standing alone at parties and considers himself responsible for the cleanliness of the toilet seat in any "single-stall facility" he emerges from, whether or not he splashed it himself. Such behavior does indeed seem above and beyond the ordinary call of manners and sets a standard worthy of a role model.

Yet all these points for gallantry are nearly wiped out in my book by Alford's account of a game he is fond of playing in restaurants, called "Touch the Waiter." The goal is to "see who at your table can touch the waiter the greatest number of times without the waiter's figuring out you're doing so." Although he stipulates that this touching should never be lecherous or "directed at the sullen or the insecure" (the preferred target is an overly attentive or effusive waiter) it is nevertheless a creepy activity, a prank aimed at people whose livelihood depends on making themselves agreeable to patrons. Would it kill him to stop doing that?

Perhaps all authorities on etiquette have to do something odious now and then to let off steam. For all we know, Miss Manners occasionally cuts in line, but she doesn't tell us about it, and therefore refrains from spoiling a facade of perfect civility. Alford is a charming writer, who seems able to spin delightful stuff from whatever straw he happens to stumble across, and his rumination on good behavior is no exception. In the end, I forgave him this most unfortunate habit. But I'm not eating out with him.

Books Henry Alford What To Read