The world faces years of ineffective rebellion and enduring recession 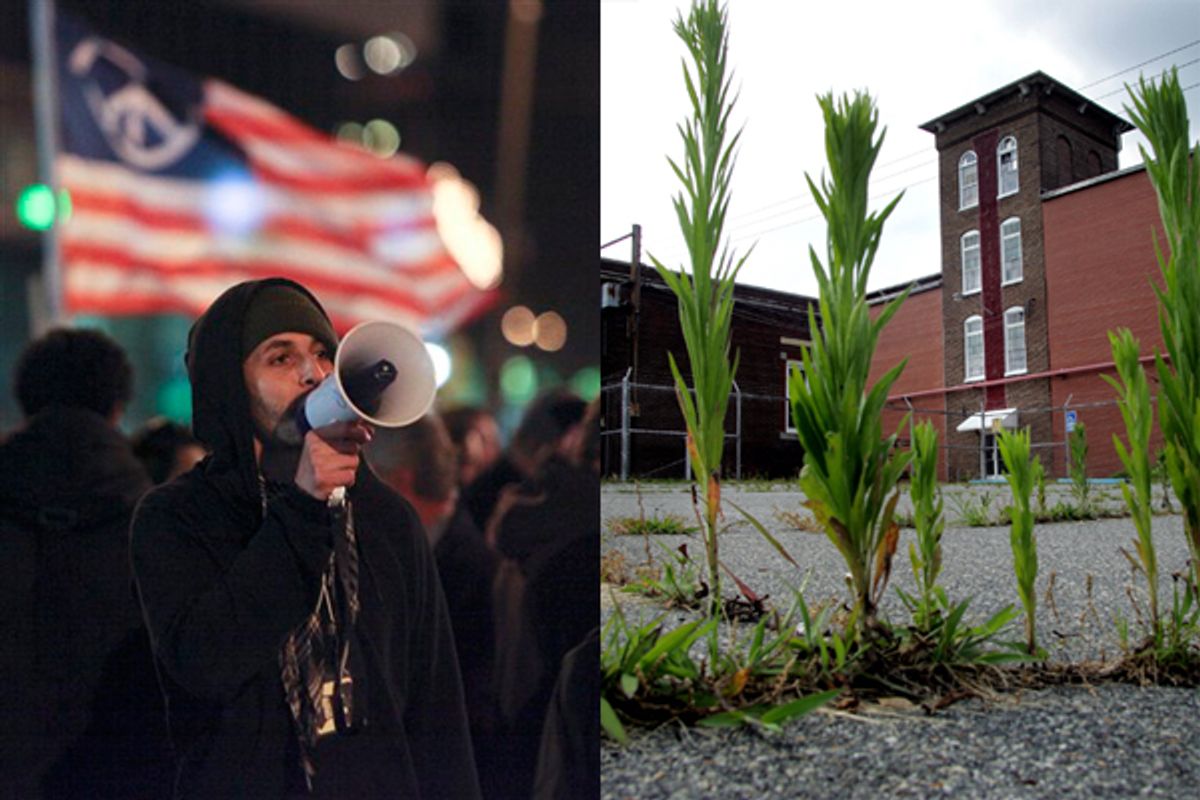 A perilous combination of drama and inertia (AP)
--

If a neologism could capture the national and global politics of our time, in the way that “stagflation” captured the combination of stagnation and inflation in the economy of the 1970s, I would propose “turboparalysis” for the combination of vigorous and dramatic motion with the absence of steady movement in any particular direction.  At the level of the nation-state and the world as a whole, wheels are spinning furiously and engines are being gunned, to no effect.

Optimists are an endangered species, now that it appears that we are at best in the end of the beginning of a prolonged crisis of the world economy, not the beginning of the end.  Hopes that the global financial crash of 2008 would be followed by a deep recession and then a sharp recovery have faded.  Coordinated stimulus programs by major countries  in the early stages of the crisis probably helped to limit the damage, but they did not produce a recovery.  The alternatives — beggar-thy-neighbor trade policies and budgetary austerity — can only make things worse in the short run.

Nearly one in six Americans is now on food stamps, so American consumers are not going to lead the world out of recession any time soon.  The long agony of the eurozone may not produce the imminent apocalypse that many fear, but even if Europe muddles through it is unlikely to serve as an engine of global growth that could drag the world out of the ditch.  And the possible implosion of China’s own internal asset bubble could punch another hole in the foundering canoe of the world economy.

From America to Europe to Asia, the political reaction to the prolonged economic crisis is turboparalysis.   On the surface, evidence of dramatic change in politics is everywhere, from the Arab Spring to riots in Greece to Occupy protests throughout the U.S.  In electoral politics around the world, angry voters are engaged in the political equivalent of high-frequency trading, tossing out incumbents without providing their successors with governing mandates.  None of this furious motion has yet produced any sustained movement in any particular direction of the political compass.  The spinning wheels cannot gain any traction.

One reason, perhaps, is that the link between populations and their representatives, in democracies no less than in autocracies like those of the Arab world, has been broken.  In every generation Americans have complained that politicians as a class are out of touch with the voters.  What if, this time, it really is true?

On both sides of the Atlantic, the institutions other than the ballot box that linked ordinary citizens with political representatives — the local and state party organization, the civic and philanthropic membership organization — have eroded or disappeared.  Mass membership organizations are all but extinct.  Today’s parties, like today’s charities, would rather raise billions from a few rich donors than enroll hundreds of thousands or millions of citizens.  For the mainstream citizens who have ceded primary voting to cadres of dedicated zealots, voting is a ritual.

And an ineffective ritual, or so it appears.   In every Western democracy there is a growing gap between the population and the permanent political elite.  Popular frustration with the permanent political class takes the form of support for protest parties, where electoral rules allow third parties to succeed, as in Germany with its Pirate Party.  In countries like the U.S. and U.K. where first-past-the-post electoral rules reinforce two-party cartels, popular anger takes the form of support for candidates who successfully pose as anti-system outsiders.

In Europe as in the United States, populist parties and movements of the right have been most successful to date in harnessing the anger of alienated electorates.  Recently Mike Lofgren, a longtime Republican congressional staffer, said in his parting blast as he resigned from Congress that the Republican Party "is becoming less and less like a traditional political party in a representative democracy and more like an apocalyptic cult, or one of  the intensely ideological authoritarian parties of 20th century Europe.”

This explains the Republican political primaries, in which Tea Party conservatives, searching for an alternative to the establishmentarian Romney, have rallied briefly behind first one and then another self-portrayed outsider — Perry, Cain, Gingrich — each more implausible than the last.  The process of nominating an electable presidential candidate has turned into an audition for a charismatic cult leader.

It is only natural that the former Confederacy should supply many of the spokesmen and much of the rhetoric for the anti-system politics of the right, as John Judis pointed out last January in a brilliant cover story (payment required) for the New Republic.  The secession of the South was, after all, the ultimate in anti-system politics in America.  From George Wallace in 1968 to Newt Gingrich and Rick Perry today, Southern demagogues have flourished in eras when Americans believe that, in Wallace’s words, there isn’t “a dime’s worth of difference” between the two parties, or at least between the two party establishments.

On the left the Occupy movement is also an antinomian movement of protest against entrenched and corrupt elites, not a traditional reform movement with achievable goals and a plausible plan.  If, as seems likely, there are years of economic stagnation and crisis ahead, then we may see a series of eruptions like the Tea Party and Occupy movements, most or all of which will briefly emerge, energize one or another party for an election cycle or two, and fade away.

“Is it a revolt?” King Louis XVI asked the Duke de la Rouchefoucauld on July 12, 1789, only to receive the reply:  “No, sire, it is a revolution.”  Revolts by peasants and workers throughout history have fizzled out spontaneously or have been easily suppressed.  Revolts turn into revolutions only when a section of the elite breaks away with and sides with non-elite insurgents.  In doing so, the dissident members of the elite often wish to preserve as much of their status or property as they can, by leading and shaping a movement that would otherwise displace them.  Joe Kennedy explained his support for the New Deal by saying that he would give away half his wealth if as a result he were allowed to keep the other half.

So far the ranks of the transatlantic political elite have remained firm, in part because of the success of the far right, in the bellwether U.S., in defining even moderate Rockefeller or Eisenhower Republicanism as socialism or fascism.  But as the global crisis continues, important members of various national establishments will likely conclude that there will be no restoration of the status quo ante 2008, that radical reconstruction of national and global political and economic structures is the only prudent, conservative thing to do.  At that point, isolated revolts may give way to systematic reforms and even economic and social revolutions — bloodless, metaphorical revolutions, it is to be hoped, in the growing number of constitutional democracies in the world.

Until then, we may be stuck in a prolonged interregnum between an old system that cannot be re-created and a new system that cannot yet be built.  We may have to endure years of activity without action and motion without movement — years of turboparalysis.