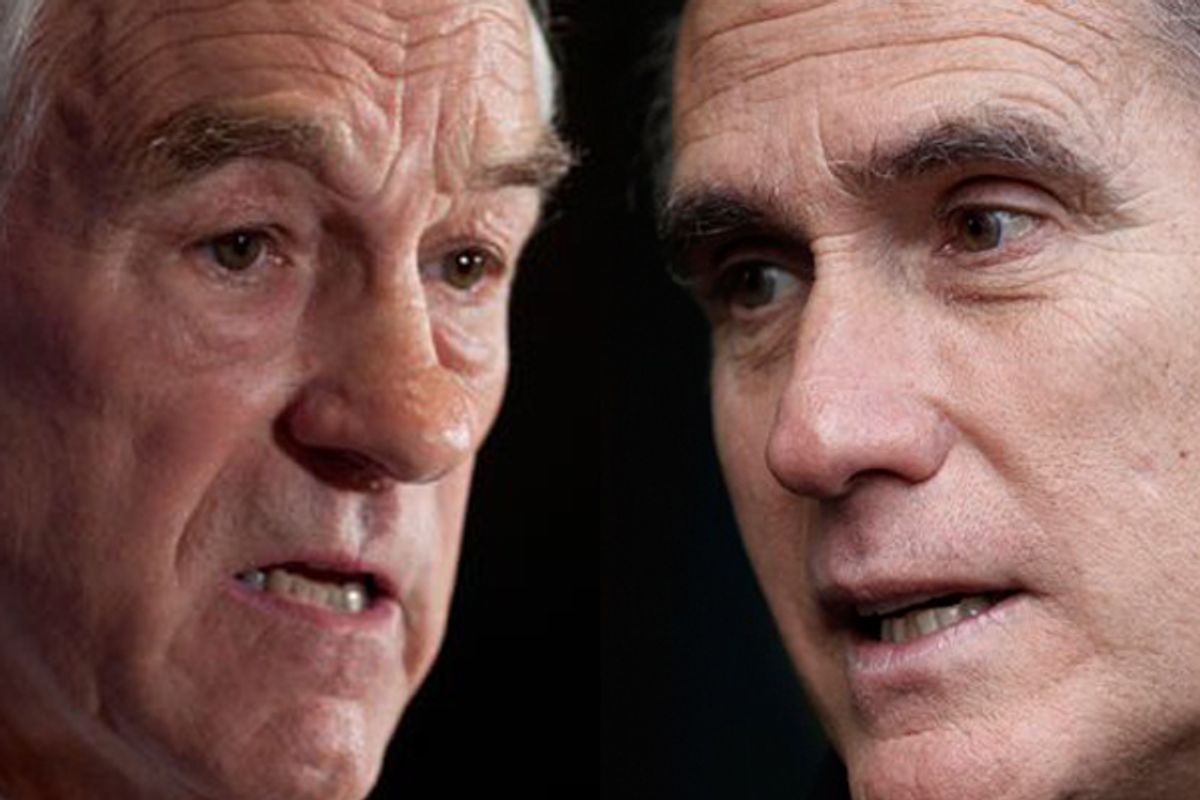 With five days to go until the Iowa caucuses, the stakes for Christian conservatives are becoming stark: If they don't hurry up and coalesce around someone, the Republican presidential race will probably become a contest between the two candidates they find least acceptable.

That's what figures to happen if Mitt Romney and Ron Paul finish well ahead of the pack next Tuesday, with the rest of the field bunched together in the low-teens and high single-digits. That this is a very plausible outcome is testament to how divided the loyalties of religious conservatives have been this cycle -- and how profoundly flawed each of the would-be Christian right standard-bearers is.

For religious conservatives, Iowa has long been a good place to kick off the GOP nominating process. The state's Republican universe contains a sizable number of born-again Christians, whose influence swells thanks to the activist-oriented nature of the caucus system. In 2008, 60 percent of GOP caucus-goers in Iowa identified themselves as evangelical Christians, one of the highest numbers anywhere. (Overall, 44 percent of those who participated in GOP primaries and caucuses in '08 were evangelicals.) So the potential exists for a candidate with deep roots on the Christian right to win Iowa and use the momentum to contend in subsequent states where religious voters hold sway -- as Mike Huckabee, who parlayed a nine-point Iowa win into a near-miss in South Carolina, showed in '08.

But Huckabee, a charismatic Baptist preacher-turned-politician, was an easy and obvious choice for Iowa's evangelicals. This time around, several candidates have been aggressively jockeying to play the Huckabee role, but no one has managed to gain and sustain a clear advantage. Michele Bachmann generated early enthusiasm, amassing strong Iowa poll numbers and winning the Ames straw poll, but then lost steam when Rick Perry entered the race. But Perry made a mess of his opportunity too, giving rise to boomlets for Herman Cain and Newt Gingrich, neither of whom was able to unite the religious right either. Now it may be Rick Santorum's chance, with polls suddenly showing the former Pennsylvania senator -- who failed all year to gain traction with the Christian right despite being a perfect ideological match -- moving into double-digits in Iowa.

But Perry and Bachmann (and to a lesser extent Gingrich) are all still playing hard for Christian conservative votes in Iowa. Whether Santorum can continue to surge and break clear of them is an open question. It seems just as possible that Santorum, Perry and Bachmann will divvy up the evangelical vote about equally next Tuesday, preventing each of them from breaking out and emerging as the right's consensus post-Iowa option.

The most recent data illustrates the Christian right's problem. A new PPP poll shows Gingrich at 13 percent in Iowa, Bachmann at 11 and Perry and Santorum at 10 each. Together, the four of them account for more than half of the support of evangelicals, but each is grabbing roughly the same share of the evangelical vote. A CNN/Time poll shows a similar result, except with Santorum building a slight advantage among evangelicals -- and thus moving several points ahead of Bachmann, Perry and Gingrich overall.

A divided Christian conservative base plays perfectly into the hands of Romney, who enjoys twice as much support in Iowa from non-born again voters than from born-agains. Obviously, Romney would like to win the state, and he may well do so. But he'd probably be just as happy to lose out to Paul as long as none of the would-be Christian right standard-bearers post breakout showings. Under this scenario, Romney would be able to pitch himself as the GOP's last best defense against Paul, whose nomination would unnerve much of the Christian right (because of his stance on Israel and the Muslim world) and other key blocs.

And if Bachmann, Santorum, Perry and Gingrich all finish lumped together in the low-teens or high single digits, there'd be no easy way to determine who of them should go on and who should drop out -- nor would it be obvious to Christian conservatives in other states which non-Romney candidate they should rally around. This would increase the likelihood of a potentially decisive Romney victory in South Carolina on January 21.

The good news for Christian conservatives who want to stop Romney is that the days leading up to Iowa can be very fluid, with insurgent candidates often making up significant ground in the stretch run. It would not be unprecedented for, say, Santorum to jump from the low- to mid-teens in polls now to victory or near-victory next Tuesday. Nor are similar leaps for Perry, who is spending heavily on the airwaves, or Bachmann, with her strong natural connection to the Christian right, out of the question. If one of them seriously outperforms the others and threatens Romney and Paul for first place next week, Iowa will have done its job for Christian conservatives and produced a clear option going forward. But if they all grab the same modest slice of the Christian right pie, it will be a very good night for Romney.