Most 2012 contenders back a personhood amendment too extreme for a red, red state, while Rick Perry hits a new low 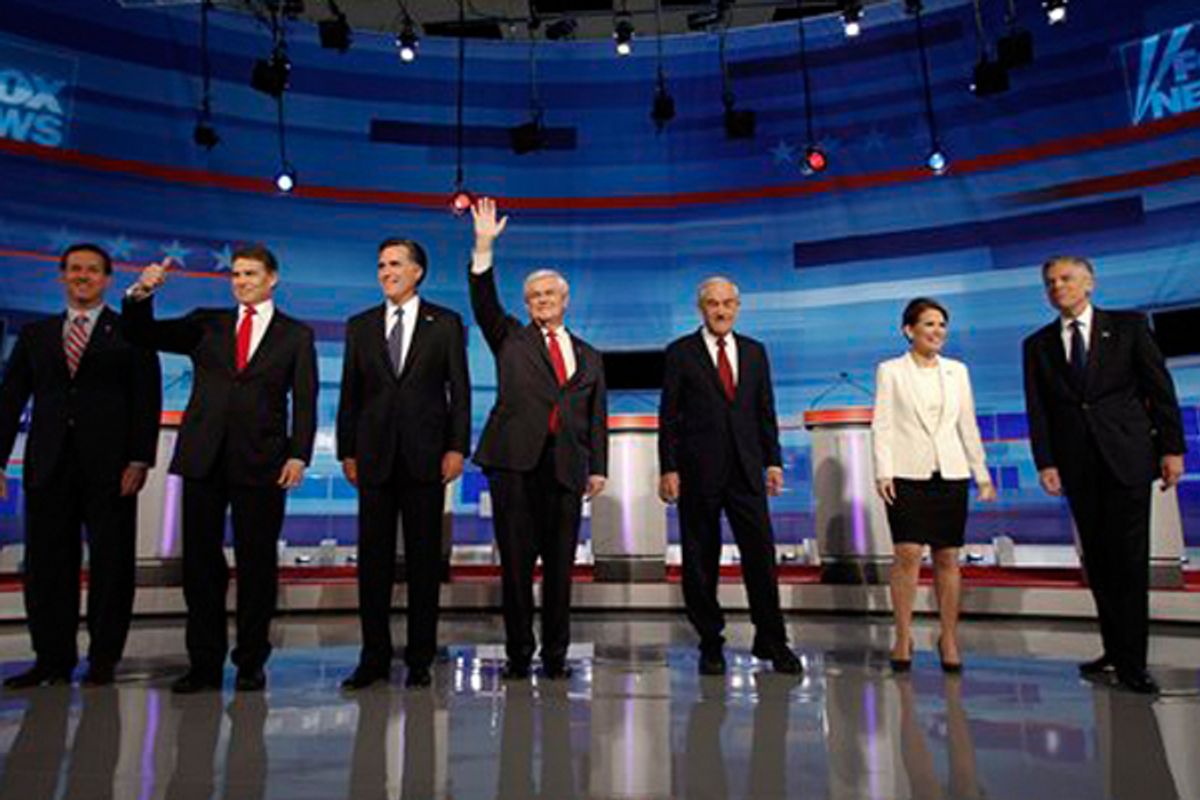 The flailing Rick Perry is trying to revive his sinking campaign by histrionically announcing he's changed his views on abortion and now opposes it even in cases of rape and incest. Apparently Perry met a young woman who'd been conceived as a result of rape, and that changed his mind.

“Looking in her eyes, I couldn’t come up with an answer to defend the exemptions for rape and incest,” he said at a "tele-town hall" sponsored by far-right Iowa radio host Steve Deace. "And over the course of the last few weeks, the Christmas holidays and reflecting on that … all I can say is that God was working on my heart."

It's just one more step toward society's political margins for the GOP contenders. Perry has already announced his support for the "personhood" movement, which declares that life begins the moment an egg is fertilized, a measure that was rejected by the deep-red state of Mississippi as too extreme. But Michele Bachmann, Newt Gingrich and Rick Santorum also back the personhood crusade. That's your modern Republican Party: It makes Mississippi look liberal. They'd like women to have more rights before they're born than after.

It's obvious the Tea Party is pulling the GOP even further to the right. While the movement's fans used to insist it was about the economy, not social issues, in fact its House caucus has used its year in office working harder to stop all funding for Planned Parenthood than to reduce unemployment. The House even passed a bill that lets health providers "exercise their conscience" and refuse to perform an abortion even in cases where the woman would die without the procedure. (h/t Digby)

But their target is no longer just abortion, but contraception as well. At Tuesday's "tele-town hall," Bachmann lied about President Obama's Plan B stance, insisting the president is "putting abortion pills for young minors, girls as young as 8 years of age or 11 years of age, on [the] bubblegum aisle." Of course, Obama backed HHS Secretary Kathleen Sebelius' decision to override the FDA and refuse to allow Plan B to be sold on drugstore shelves, specifically citing concerns about young girls. Personhood legislation would make the IUD illegal, as well as any measure that interferes with a fertilized egg attaching itself to the uterine wall, including some fertility treatments.

Resurgent front-runner Mitt Romney stands apart from the far right on some of these issues. He hasn't supported personhood legislation, for instance (yet). But in some ways Romney's flip-flopping on abortion is as disturbing as his rivals' extreme anti-choice fanaticism. Running for Massachusetts governor, Romney told voters he'd become pro-choice after a close family friend died due to a botched illegal abortion. (Salon's Justin Elliott told the tragic story here.) What happened to his feeling for that friend? How could he flip-flop again, after a supposed moral and political awakening like that? And libertarian Ron Paul opposes full liberty for women: He's antiabortion (though he'd leave it to each state to decide). The man who wants to deregulate industry wants to regulate women's bodies. That doesn't sound like libertarianism to me.

Will the GOP's continuing shift right on abortion, clearly intended to court the religious-right base during the primaries, hurt the party in the general election? I have to assume so. Ever since Ronald Reagan campaigned with the blessing of the Christian right, there's been a pronounced difference between men and women when it comes to their attitude toward the Republican Party. Women have been registering and voting increasingly Democratic, not just because of abortion rights or other so-called women's issues. It's also because women are more likely to believe in a government safety net, to back programs like Head Start, education funding and other services for poor families as well as Social Security and Medicare. I don't think that means women are more compassionate than men; I think it reflects their greater economic vulnerability, since poverty rates are higher and median incomes lower for women than men. Clearly the far-right GOP is writing off increasing numbers of women, as well as blacks and Latinos, immigrants, and gay people. Good luck with that, long term.

There are two warring forces at work in the world: One is the empowerment of women, especially in the developing world. There is no magic bullet for global poverty, but the only thing that comes close is expanding education and human rights for girls. Educated girls have children later, and when they do become mothers, their children are healthier and better educated. Their family incomes rise, and so do the living standards of their community. It is clear that promoting the rights and status of women improves the well-being of the entire society; some people, and governments, get that, globally.

But there's also an intensifying hostility to full freedom for women in all corners of the world. One of Wednesday's most disturbing stories was the New York Times tale of an 8-year-old Orthodox Jewish Israeli girl spat upon and abused by ultra-Orthodox bullies because even her modest outfits didn't conform to their stifling dress code for girls and women. Israel, which was once defended as a European enlightenment outpost in the supposedly backward Middle East, is facing a rising tide of far-right religious activism trying to ensure that women are neither seen nor heard outside the home. Literally. These crusaders believe in separate worship for each gender, because men are not supposed to hear a woman's voice in public, not even singing hymns. On some bus lines serving ultra-Orthodox neighborhoods, women are literally made to sit at the back of the bus.

No, I'm not comparing the personhood movement or the GOP contenders to violent misogynist Egyptians or to the religious extremists who want to exclude women from Israeli or Arab public life.  But the increasing extremism on choice that is now seeping into public policy on contraception reflects a related discomfort with full personhood for women. There is no freedom or equality for women without reproductive freedom. Having been raised a Catholic, I understand religious objections to abortion, and my only answer is, by all means, don't have one. Work to make them less common. A rape victim who doesn't want an abortion is of course free to make that decision. But a secular society has no business imposing one religion's values on everyone.  (Lost in all the insanity about abortion is the fact that the incidence of abortion has declined by at least a third since the 1980s.)

Michelle Goldberg and I talked about increasing GOP extremism on abortion on MSNBC's "Hardball" today: