Newt Gingrich and the pantheon of campaign trail weepers 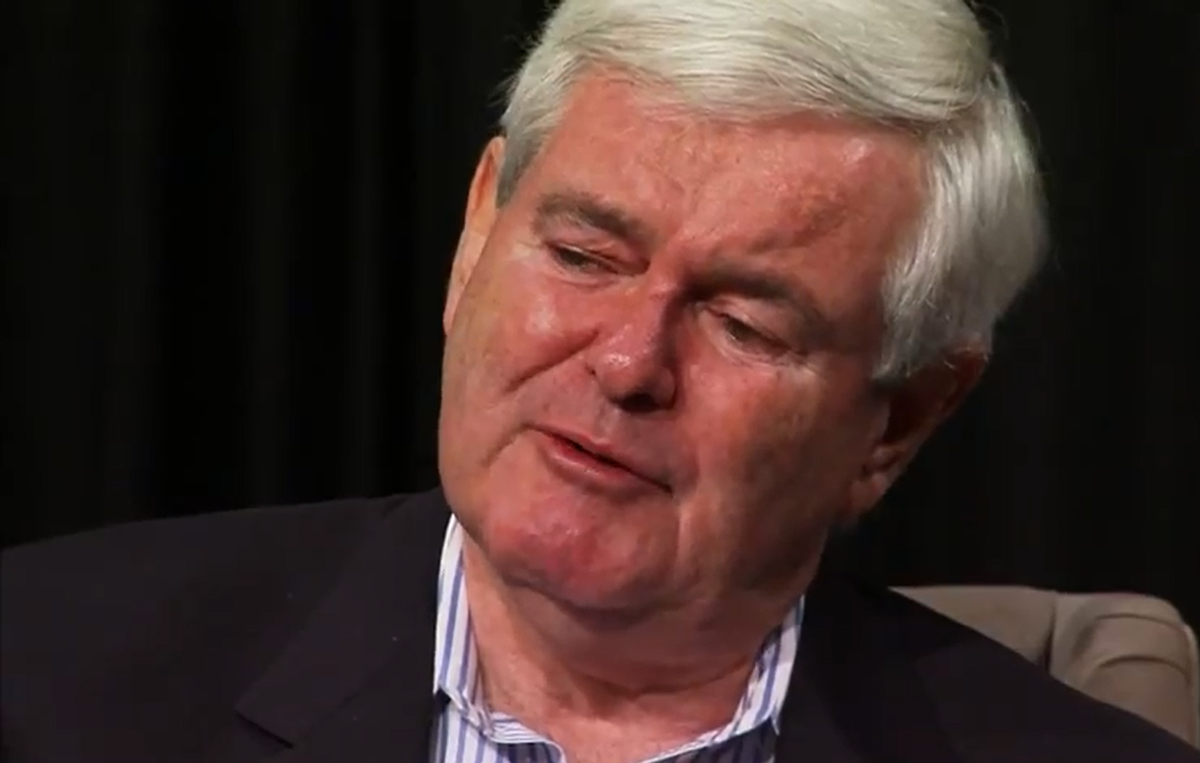 If you haven’t seen the video of Newt Gingrich tearing up, don’t worry – it figures to play over and over on cable news shows in the days ahead.

The former House Speaker, whose poll numbers are collapsing as the lead-off Iowa caucuses approach, choked up at a town hall event in Des Moines today when moderator Frank Luntz (the GOP pollster who helped Gingrich create the Contract with America in 1994) asked him to talk about his mother, who died in 2003. Gingrich said that he gets “teary-eyed every time we sing Christmas carols,” then welled up while trying to connect his interest in long-term healthcare and brain science to his mother’s struggle with mental illness. He grew even more emotional when Luntz followed up by asking him what he would tell his mother if she were here today:

Gingrich is not the first GOP candidate to choke up on the campaign trail this year, but this incident figures to attract more attention because it seems so out of character. Gingrich has long enjoyed an image as a political meanie – a guy who makes other people cry, not one who cries himself. In that sense, it may be end up being one of the more famous examples of weeping on the presidential campaign trail. Here are a few others:

Ed Muskie, 1972
The Maine senator, who had served as Hubert Humphrey’s running-mate in 1968, was the front-runner in the New Hampshire Democratic primary when the (Manchester) Union Leader’s caustic publisher, William Loeb, published an editorial suggesting that Muskie’s wife had a drinking problem. This came on the heels of another Loeb editorial (fabricated and planted by the Nixon White House, it turned out) that accused Muskie of laughing at an ethnic slur in Florida.

Muskie responded by holding a press conference outside the Union Leader’s office, where he called Loeb a “gutless coward.” Then, as he defended his wife’s honor, Muskie’s voice choked up and tears appeared on his face. Or did they? There were snow flurries in the air and to this day there are those who insist that the “tears” were simply melted flakes. Nevertheless, the incident was widely portrayed as an emotional breakdown in response to negative press, and Muskie went on to post a pyrrhic nine-point victory in New Hampshire – a result that amounted to a victory for second-place finisher George McGovern.

Pat Schroeder, 1987
One of the most prominent female politicians of the 1980s, Schroeder set out to run for the Democratic presidential nomination in mid-1987, after he friend and fellow Coloradan Gary Hart’s campaign imploded.

Early poll numbers were encouraging, if not overwhelming, but fundraising quickly became problematic and by the end of September Schroeder decided to drop out of the race. When she began explaining the reasons for her departure at her Denver press conference, Schroeder lost her composure, looked down and abruptly stopped speaking. The crowd responded with warm applause, but her emotional moment became a major national story and prompted a debate over sexism in media coverage. It also gave rise to a recurring Schroeder character on “Saturday Night Live” (played by Nora Dunn), who moderated the show’s fake Republican and Democratic debates, breaking into tears during each one of them.

Hillary Clinton, 2008
When she choked up while explaining why the campaign was “so personal to me” just days before the New Hampshire primary, there was a consensus that Clinton was on her way to becoming the next Muskie. After spending a year as the seemingly overwhelming frontrunner, she had just finished third in Iowa and her Granite State numbers were in a freefall. And now, just like with Muskie, the pressure seemed to be getting to her.

But then something funny happened: For reasons that are still in dispute, Clinton pulled off a three-point victory in New Hampshire, even though polls on the morning of the primary showed her losing to Barack Obama by double-digits. Some insist Hillary’s tears unleashed a wave of sympathy from New Hampshire voters; others say they were inconsequential. Clearly, though, they didn’t hurt.