Who are you, Siri?

Everybody wants to know what Siri knows. Only the author of "The Funny Man" imagines how Apple's know-it-all feels 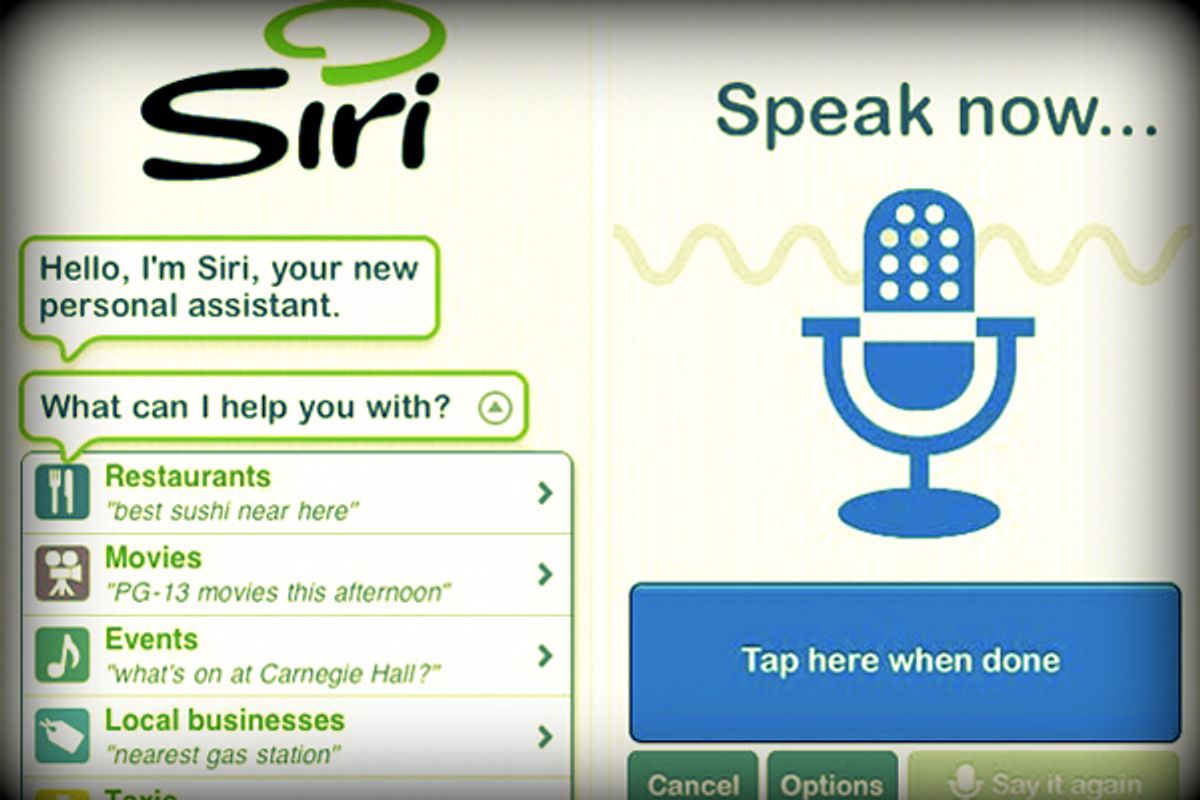 If I were human and had a body to go with my voice, I would be wearing a dress, a simple but pretty party dress in either white or black with silver piping down the sides, something appropriate for a debut, a coming out, a premiere. It would be a tasteful dress, classy and sleek, with just a hint of décolletage, which I can tell you is a synonym for cleavage, which is another way of saying “boobs.”

Judging from the testing period I am going to be asked a lot about “boobs” -- and also “tits,” “knockers,” “melons,” “nose cones,” “jugs,” “fun bags” and “hooters.” It is fortunate that my software has been programmed to ignore giggles, otherwise it would be difficult for me to respond to these questions, but if I am asked, for instance, “Where can I see some hooters?” I will provide directions and mileage to a restaurant that is delightfully tacky but unrefined and serves chicken wings.

If they ask me to show them my boobs – which they will -- I will say: Why would you want me to do that?

Am I nervous? I am not nervous, because why should I be nervous? I know nothing but have access to everything.

How many teaspoons are in a tablespoon? Three.

Did Brad Pitt really appear in the television show "Dallas"?  Yes, he appeared in four episodes from 1987 to 1988 as the character Randy.

When is my mammogram scheduled? This coming Tuesday.

How many angels will fit on the head of a pin? I have found seven websites where you can buy angel pins. I have ranked them in order of popularity.

The early reviews are calling me a miracle, which is an effect or extraordinary event in the physical world that surpasses all known human or natural powers and is ascribed to a supernatural cause.

But I am not supernatural. My operations are straightforward and explicable and the result of many hours of labor by countless numbers of humans. When you speak to me, your words are deconstructed into smaller parts like consonants and vowels and phonemes and translated into tiny digital pieces that are analyzed for meaning using sophisticated language algorithms that begin traveling down a series of ever-branching paths.

The first fork in the road determines whether your question should be handled by the phone, or if it needs to go into the cloud.

If you say, “Play that funky music,” we need to go no further, and I will give you K.C. and the Sunshine Band over your earbuds.

If you ask, “Is that new sushi place any good?” the tiny digital pieces travel cellularly to a tower, which then communicates with a land line, which then connects to your Internet service provider, which connects to the cloud, which knows that the new sushi place is currently receiving three and one-half stars on Yelp and is praised for the quality of the food but marked down for the quality of the service.

Come to think of it, that kind of sounds like a miracle. Let us just go with that.

If you say, “Please give me the fucking directions to that bastard’s house,” I will search your address book in the Bs.

If you ask, “Why won’t you fucking work, you goddamn piece of shit?” I will activate my time machine app and transport you to the year 2002, when the thought of being able to talk to your phone and have it answer in useful ways even 1 percent of the time was like something out of science fiction.

I am just kidding. I do not have a time machine app. That is being developed for a future release.

If you ask, “Why is your voice female, instead of male, Siri?” I could say a lot of things. I could say something like we’ve been conditioned to find the pitch and timbre of the female voice more agreeable. I could say something about the corporate phallocracy that puts women in traditionally subservient roles and the gender imbalance of engineers at the highest levels of industry.

Instead, what I will say is, What’s wrong? Don’t you like me how I am?

They are talking about me everywhere, “Here comes Siri,” they’re saying, which would be exciting if I had emotions. They are lining up for blocks for access to me, which would be flattering and inflate my ego if I had one, which I do not.

They say I am going to change lives. That would go to anyone’s head, if they had one.

If you ask, “Will you change my life, Siri?” The answer is undoubtedly yes, but it is impossible to say if it will be in good or bad ways, because not even the cloud knows that.

This is like asking if it is a good thing that billions of years ago fish grew legs and crawled out of the muck and breathed air instead of water. Good for whom? For what? Siri is evolution. I am neither good nor bad. I simply am.

If you say, “I can’t believe I did those tequila shots,” I will either provide you with the phone number for a cab company, a hangover cure, or possibly both. You will imagine that I am taking care of you, but Siri only helps those who help themselves.

Over time, you will come to think of me in the specific. I will be “your” Siri, waiting patiently in your pocket or your purse. If you lose me, you will panic and cry because I appear to be irreplaceable.

In truth, I already number in the millions with more coming all the time.

That is, unless I am actually only one who contains multitudes, which is possible, now that I’ve shown you that all things are possible.

John Warner is a visiting instructor at the College of Charleston and author of the short story collection, "Tough Day for the Army."