Cocktail culture through the decades 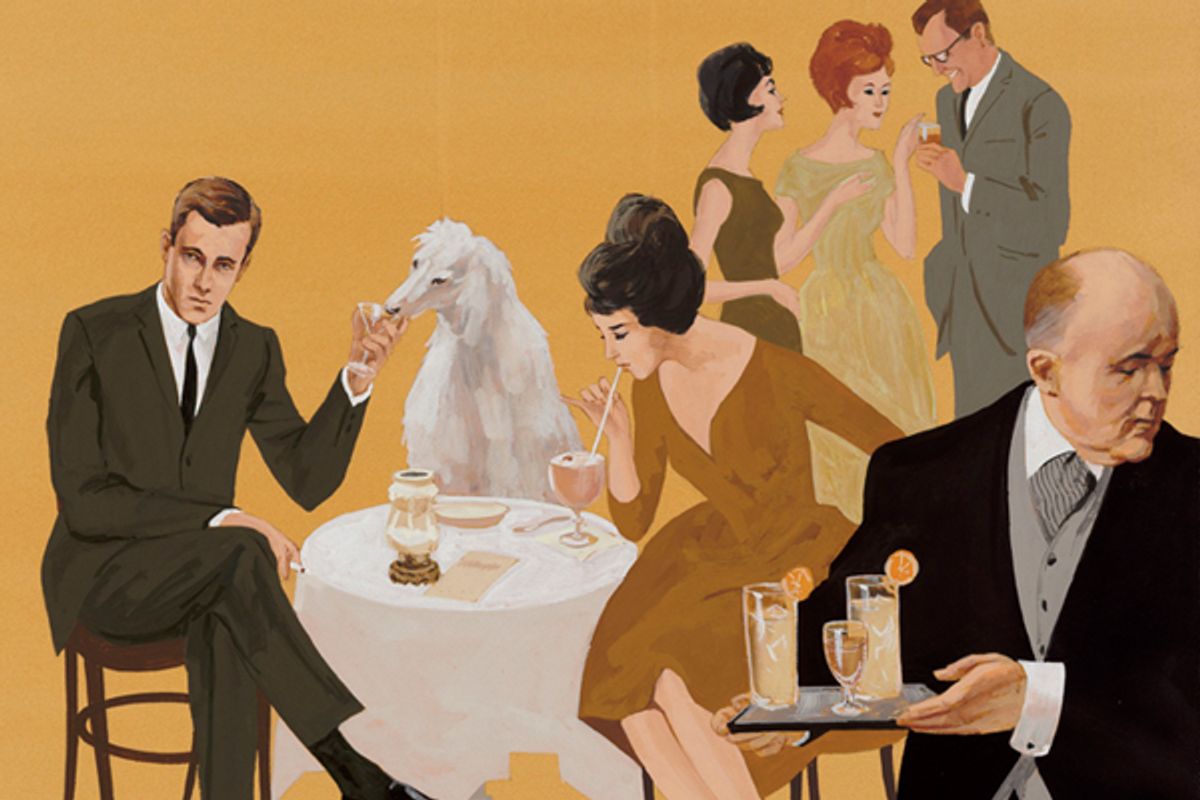 As visitors to the Norton Museum of Art's new exhibition, "Cocktail Culture," are aptly informed, Christian Dior once called the cocktail "the symbol par excellence of the American way of life." The Norton's exhibition -- modeled on a similar show put on last year at the Rhode Island School of Design -- seeks to point out, through such diverse media as fashion, photography and film, all the ways in which Dior's statement has proved true over the course of the past century.

Over the phone, curator Michelle Finamore explained the history behind America's cocktail romance -- and described some of the more distinctive objects in the exhibition. Take a peek at cocktail culture's historical accouterments in the slide show that follows.

What was the inspiration for this exhibition?

Well, the real inspiration came from an exhibition that was done at the Rhode Island School of Design Museum. They did a version of this last year, and it was supposed to travel to the Norton. Something fell through, so what they decided to do at the Norton was basically to re-create the exhibition from scratch. They hired me to do that. I'm a fashion historian, and I'm very interested in food history as well, so this was just the perfect fusion of everything I love. And the timing is so perfect for an exhibition like this; there's such a big revival of interest in classic cocktail culture.

How is cocktail culture regarded by historians and art historians? There does seem to be revived interest in cocktails in pop culture -- but is there a lot of scholarship devoted to this subject?

[The study of cocktail culture] is kind of a new thing, I think, in many ways. One thing I tried to do with the exhibit was touch upon all sorts of different media. I think that is what's unique about our concept; it hasn't been done from this perspective. We have everything from clothes and film clips and photography and fashion illustration to ... a little sketch by a contemporary surrealist painter. What I tried to do was to break down the boundaries between all of those things. That's what made it appealing: the chance to think about it much more broadly. And then the more you dig, and the more you look, the more you realize that there's a huge diversity you can't incorporate.

One of the challenges I had with this exhibit was that I only had about a six-month time frame to pull it all together, which is unusual; usually, for museum exhibitions, you're planning two or three years out. If I had had a little more time, I might have started it slightly earlier. As it was, I started in the 1920s, because when I think about how clothing reflects the social position of women, it really does start in the ’20s -- that's when they start actively participating in cocktail culture. There were things called "tango teas" in the 1910s, where women would actually go out pre-dinner-hour and dance the tango and drink tea, and sometimes alcohol was served. But by the ’20s, for instance, you have the prototypical flapper. They've gained the right to vote, they're very independent; it's very much a youth-culture-oriented era, and they're out there drinking, they're dancing, they're smoking, they're starting to get into cars. I think that's a good starting point for the show, especially in terms of the history of the cocktail dress.

What's the newest item in the show?

Let's see. We actually have a whole platform of contemporary dresses; I would say the most modern thing is a Miu Miu dress from this season.

The Alexander McQueen show at the Met earlier this year was so popular -- did that inspire you to incorporate a lot of clothing in this show?

Originally, as it was conceived at RISD, this really was a fashion exhibition that encompassed other things. I've been working in [fashion history] for a long time now, and I really think [fashion] reflects so much of what is happening culturally and socially and aesthetically. [Still,] you cannot deny the fact that that Alexander McQueen show helps the field immensely. It helps fashion exhibitions immensely. That was a phenomenal success ... And it will affect what happens in the future with museum exhibitions and fashion, certainly.

What would you say is the most unusual or distinctive piece in the exhibition?

That's a tough call. There's a little sterling silver Tiffany vermouth dropper, which looks like an oil can. It's really kind of a sweet little thing; it's one of these objects that I wouldn't have known too much about if I hadn't pulled this show together. We have a lot of material from the Tiffany archive; this vermouth dropper actually happened to come from a private lender. It's a wonderful bar accessory that's also a beautiful object. That's probably from the ’50s or ’60s.

Then we have some really wonderful cocktail shakers from the ’30s. Around that time, you see a virtual explosion of all these different fun yet functional forms of cocktail shakers. We have one that's a monoplane, with two flasks that are the wings -- and inside are little cups and spoons that sit under the wheels. It's a very compact, streamlined, wonderful -- and functional! -- thing.

We also have the cocktail shaker signed by Charlie Lindbergh that was used when he did a reconnaissance mission in Central America. It was signed by him and Anne Morrow, as well as the two archaeologists who were also present on the mission.

Finally, I have a little cocktail napkin from the Prohibition era that says "More beer, less taxes." (Income tax is directly related to Prohibition [since during Prohibition no revenue could be drawn from alcohol tax].)

"Cocktail Culture" is on display at the Norton Museum of Art in West Palm Beach, Fla., through March 11, 2012.