How do you catch 18 Bengal tigers?

When a man killed himself and set his exotic zoo free, the Zanesville police had one complicated mess to clean up 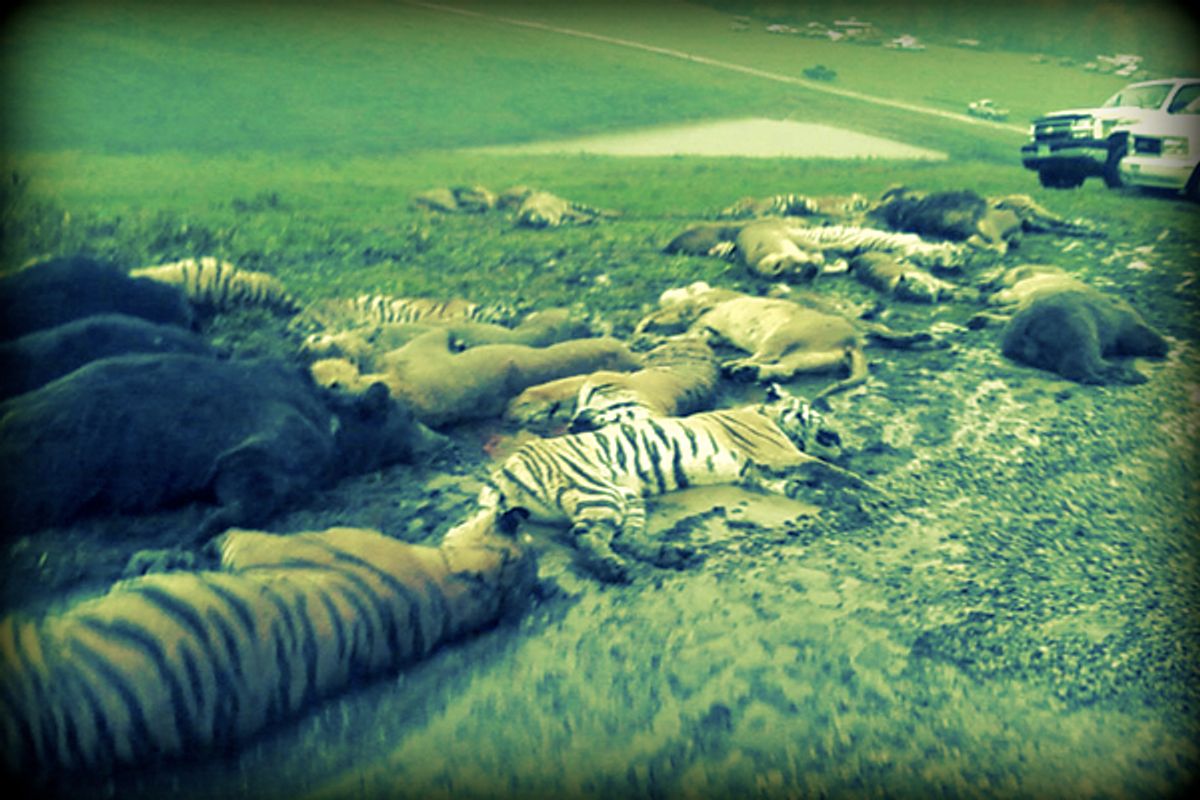 These are the things I know:

My name is Ralph Morning and I am a deputy for the city of Zanesville.

I want to stay married to my wife.

I am parked on a small road by a large field, because some guy out there was a bigger disaster than me. It is always the morons who have machetes, machine guns or 18 wild Bengal tigers.

Mickey Lutton has already rushed out to find some other deputies who radioed in a bear sighting. This property used to be a refuge if you listen to the news, or a backyard zoo if you don’t. I offered to patrol the side gate here, keep curious teenagers from getting mauled. It’s fine by me to stay in the car. Last time I followed Mickey on one of his Rambo missions, we wound up chasing two drunk guys into a sheep pasture and I busted up my knee in a hole.

And anyway, my brain is throbbing. Not my head but the loose stuff inside it. It feels like it’s just getting slapped from one side to the next, like it has a siren embedded in it. I have called Jill seven times already, listening to her voice say, “Hey, can’t make it to the phone right now, but I’d love to talk to you!”

The phone’s screen glows so bright, I see boxes of light everywhere when I put it away, and then finally, Ohio dusk, late October, the orange light and grassy fields.

These are the sort of fields I grew up on, the whispering of wheat, the rustle of corn. Except there are no crops out here. It’s all disorganized and natural. Mickey Lutton is probably rubbing his jacket with dirt right about now so he smells like the earth, imagining himself creeping right up alongside a tiger, smelling her acrid feline smell, and hissing “Who’s the big cat now?” before he lobs a bullet into her head. Because that’s the way it is with Mickey.

The day has been really weird. First, it was just regular except that it wasn’t, except that my entire life had just caved in. But there everyone was with their tan jackets and Styrofoam cups at the morning meeting. I had a lot of paperwork, and I took lunch out at the little Chinese place. Then, there was a sighting of large bear on the road. A wolf running across a field. A lion spotted out near some yellow aspens. At first, I thought I might be in some kind of waking dream. I hadn’t slept and I’d had a little to drink.

Because last night, me and Jill got into a fight. I thought it was about how I am always putting the envelopes in places she can’t find them, and then all of a sudden she was weeping in the bedroom, hugging herself like she might come apart, like her skin was falling off. I always assumed the end of a marriage would be ugly, as loud as two fighting pit bulls, but she wept really quietly on the bed for a while, and then she said she had a bag packed in the closet, she had been waiting to get up the nerve to tell me. I tried to hold on to her arm but she didn’t even tense away. Finally, I just had to let her walk out.

I know she’s still mad about last spring, but it just seemed so stupid, that someone could stop eating and manage to have that cost $13,000 in doctor’s bills and counseling.

Then the noise startles me, a banging, and I see my life flash before my eyes — no, the sound of my life playing back to me in the blood in my ears. I see a lion, five tigers, winged with vultures and raptors, trailed by rabid macaws, I can feel the powerful claws breaking through this bulletproof glass, the deep prick of teeth in my neck — but it’s just Mickey Lutton slapping the car hood with his meaty hand, motioning that’s he’s going the other way, across the road. It would not be the world’s greatest tragedy if Mickey Lutton became dinner for a lioness. That bottle-shaped man is happily married. His wife has enough extra body weight to share with several dozen starving children, but every time she comes to fetch him at a bar, he handles her like she’s porcelain herself.

“Where’s the wife?” asked Bill Cutts, the chief when we first heard the news of this suicide out there, the 56 beasts now roaming these low hills. Estranged, said Sally Perkins. Now there’s a word for you, "estranged." It takes a lot to get all the way out to that word. First you have to be on the other side of it. Then something happens and you’re cut free and the world is bigger and scarier than you ever imagined, made wild again by another person, just like that.

This Terry Thompson story is so sad. This guy gets out of prison, and he looks around and sees what he’s been doing all these years in the name of rescue or zoology or something — the cages, the insufficient food, the proscribed company. All this life penned up. And he just gets a need for liberation. You can understand that. You can kind of see how a man might get metaphysical, after being behind bars, aware of his spirit trapped in his body. And he has some rush, some crazy rush. He already feels their thundering feet in his arms and head and heart.

He knows they’ll all die; he’s brought his gun. But he also knows that in that second, when the bars unlatch, when the world goes saturated with color, when the smell of the leaves is God itself and the heartbeat is orchestral, in that tiny window of the time, the bars will be gone and that will be the only thing that matters.

The throbbing in my head’s not getting any better. I punch redial and listen to the phone ring and ring, then her message, then the beep. I hang up and dial again. The rings have become almost hypnotic. But this time, she picks up on number four, right before the voicemail. “What do you need, Ralph?”

My insides are so busy rising up and then catching fire, and then swirling around that I almost don’t understand the sound of the first shot. The next three, though, they make sense. I can’t talk now. I put my hand on my gun and take a step outside. The sunlight has faded and the smell out here is sweet as tea. I can’t see anyone; I just start walking. I don’t know if I’ll ever know where all that roaring is coming from.

Robin Romm is the author of the story collection "The Mother Garden" and a memoir, "The Mercy Papers."