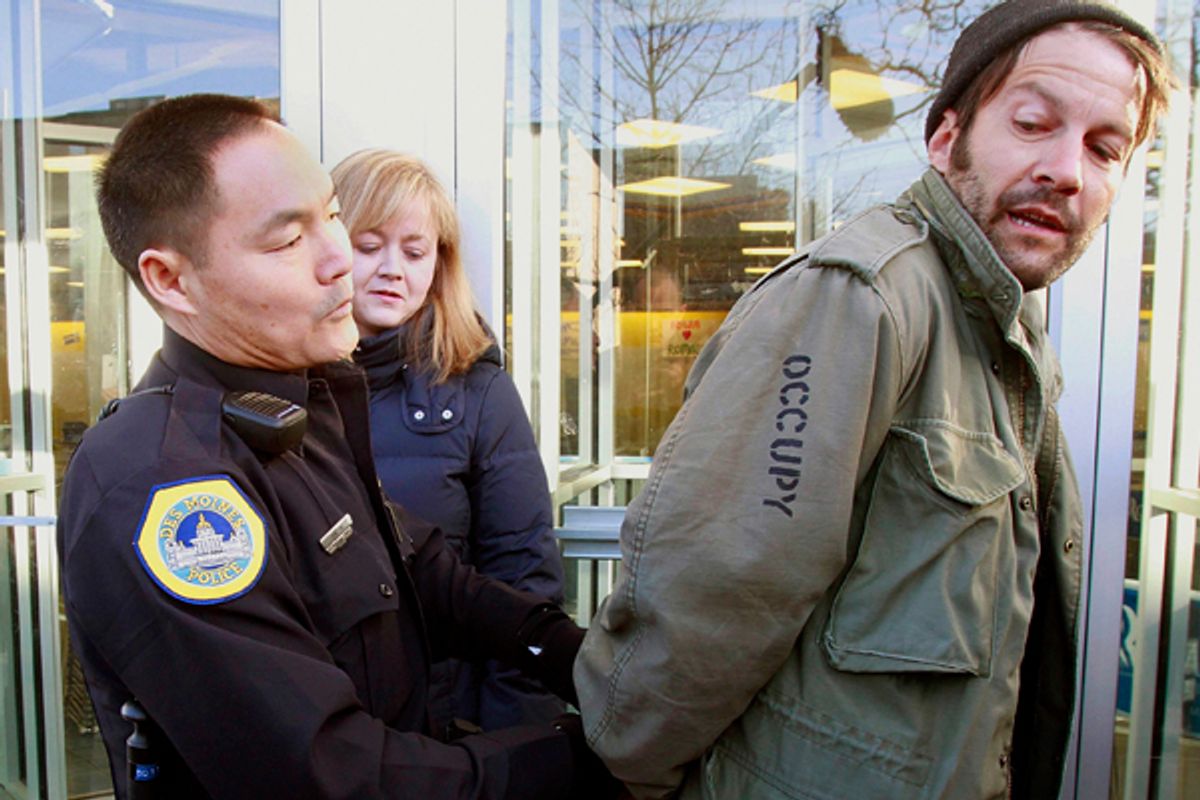 A protester is arrested for blocking the entrance to Republican presidential candidate Mitt Romney's local campaign office during an Occupy The Caucus demonstration in Des Moines, Iowa. (AP/J. David Ake)
--

DES MOINES--"They're closing, so if you want to get arrested, come now!"

An older woman made the announcement as she breezed into and Occupy Iowa Caucus' headquarters early Thursday afternoon: word had gotten out about the group's latest demonstration. They'd already hit local offices for Ron Paul, Mitt Romney, and the Wells Fargo branch irresistibly close to Romney's campaign headquarters, and now their next target apparently knew they were coming.

The occupiers scurried to their cars, armed with their anti-Wall Street placards still fresh with marker ink. While navigating the streets of downtown Des Moines, Jess Mazour, 24, fumbled with her cell phone and a Ziploc bag of reporters' business cards as Katie Rockey, 19, fed her phone numbers from the back seat.

"Let me call Channel 13," Mazour said. "I know that number by heart." After an answer, she began her spiel: "I'm calling to let you know we're headed to occupy Iowa's Democratic headquarters right now."

Welcome to the latest and perhaps most unique iteration of Occupy Wall Street, where a splinter cell of Occupy Des Moines protestors, many of them former Obama supporters, are heading the movement's first significant injection of street politics into electoral politics. And if what's happening in Iowa augurs anything for the 2012 cycle, Democrats nationwide will be facing a vote of no confidence from former allies who now see the party as part of the system they're trying to occupy. Earlier this week, when more than 100 progressive occupiers caucused to pick their candidates of greatest "dispreference," the largest number, 30, picked Barack Obama.

"I voted for Obama in 2008, and I feel really let down by what's happened since then," said Ross Grooters, 37, of Pleasant Hill, Iowa. His mother-in-law had to move in with him, his wife and his daughter after she lost her job and then her home.

If disruption is the name of Occupy's game, Occupy Iowa Caucus has already succeeded in Des Moines. The local Obama campaign office was conspicuously shuttered on the day occupiers had identified it as a protest target. Meanwhile, state Democratic leadership had no idea what to do with the few dozen protestors — many of whom they've worked with before — who then decided to show up on their headquarters' doorstep for a sit-in instead.

"You are preventing them [Democratic volunteers] from entering or leaving," a frustrated Iowa Democratic Executive Director Norm Sterzenbach told the occupiers, who later dubbed him Scrooge McDemocrat. "I see that as a violent action."

"We will defend our right to do a nonviolent protest," replied occupier Frank Cordaro, 60, something of a local legend; he's a Catholic anarchist who's been arrested more times than he can remember.

"Well, we see it as violent, and I'll treat it as such," Sterzenbach told Cordaro.

State Democratic party chairwoman Sue Dvorsky tried to be more patient with the protestors, but even patience proved incompatible with the Occupiers' demands.

"I'm just here to listen," Dvorsky said as a small crowd of occupiers gathered around and volleyed anti-corporate grievances at her for 20 minutes. "I just don't know what you want from us." We want to talk to Obama on the phone, the occupiers said, and ask him to take corporate money out of politics. "We do not have the ability to get the President on the phone and to get him to do the things that you want to do," Dvorsky replied.

Democratic Party, meet Occupy Wall Street. To many outsiders, the Occupy movement has a particularly infuriating brand of Zen obliqueness to it because of its refusal to appoint leaders and lay down clear, negotiable demands, the typical mode of American activism. The movement sort of exists for its own sake; there's no obvious authority that will realistically give it the kind of vast economic reforms that many occupiers would like to see, so many participants figure they'll band together, stick around and raise hell until an authority exists that can.

"No longer does it matter who gets elected," Cordaro told me earlier this week. "Tweedly dee, tweedly dum. There could not be two more different presidents in our history than George W. Bush and Barack Obama, and yet the corporations still run the system."

This Democrats-equal-Republicans rhetoric, at least among the far American left, isn't particularly new. But what's new is that Iowan occupiers, which includes a somewhat broader ideological array of members than the left's usual suspects — there are Occupy nuns! — are starting to act on it, and the upcoming caucuses gives them the perfect opportunity.

No one here has uttered the phrase "lesser of two evils" by my hearing, and that doesn't bode well for a Democratic party already facing an enthusiasm gap against its motivated Republican opposition. State Democratic executive director Sterzenbach said liberal activists had never picketed its headquarters or shown such open confrontation since the movement's first sit-in at party headquarters last week. Twelve were arrested on Thursday night.

Occupy Iowa Caucus faces its own pitfalls, for those in New Hampshire watching Des Moines' experiment for cues. The movement's leaderless structure and diverse ideological grievances have made for sluggish decisionmaking sessions on who and where to protest — a major impediment for activists facing a Jan. 3 deadline to inspire statewide voters to vote "no preference" on both parties' ballots.

The result is that all the protests have thus far looked the same: a few familiar die-hards decide at the last minute to sit down in front of a given candidate's doorway for the sake of getting arrested in front of a few cameras.

It's worked so far; the Des Moines movement's received exactly the boon of journalistic interest that it clearly craves and needs for new members. But in Iowa, where the relationship between the activists and the police remains startlingly polite compared to the bitterness harbored in many coastal Occupy movements — there have been no incidences of rough arrests — could the lack of violence lead to media and public disinterest? It's hard to say, when so many national journalists are here and starved for a stories beyond candidates desperately shaking strangers' hands.

But for the occupiers risking arrest, it's become the only conceivable course of action anybody can think of. Take Grooters and Shawn Gude, 22, two 2008 Obama voters who decided to tape dollar bills to their mouths and stand in front of the front doors to state Democratic headquarters until the police came to remove them.

"There's nothing for a citizen in a democracy left to do than put his or her body on the line and stand up for his principles if voting has become meaningless," Gude said, his back to the glass, before sheepishly correcting himself: "I should say insufficient, rather than meaningless."

"It's not that these aren't issues that everybody knows or understands," Grooters added helpfully.

"Well, we have dollar bills taped over our mouths, so it's a little more difficult to express ourselves," Gude replied, and that's about when the cops came to take them away.

Matt Pearce is a contributing writer for The Los Angeles Times, The New Inquiry, and The Pitch in Kansas City. You can follow him on Twitter at @mattdpearce.