Ryan Gosling: A fantasy for the Internet age 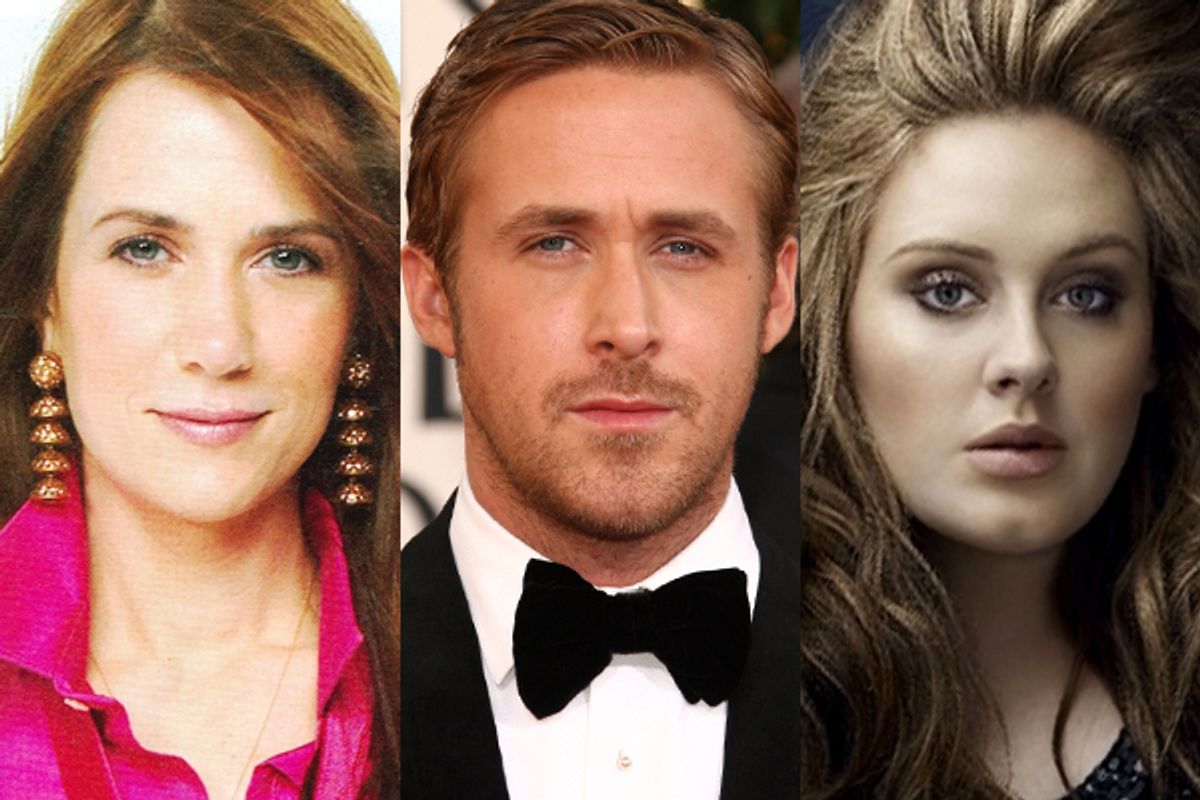 Hey, Girl: In case you hadn’t noticed, Ryan Gosling may be this year’s king of pop culture. He’s certainly this year’s king of the Internet meme: Ryan Gosling is a feminist, works in publishing, teaches rhetoric and composition, works as a librarian, studies public history, goes to law school, and still finds time to be romantic. In real life, he fights crime, hangs out with Eva Mendes, and has very nice abs. It’s no wonder Gosling was recently named Time magazine’s Coolest Person of the Year, an honor that may appease the people who were so aggrieved by Gosling’s failure to be named People’s Sexiest Man Alive this year that they held a protest.

While I’ve not quite reached that level of obsession, I understand their fascination.  Who wouldn’t swoon for a man who turned Benedict Anderson into a pickup line, understood intersectionality, and swore his devotion to the proper use of the Oxford comma? I’ve encountered The Crush in women who pride themselves on not paying much attention to celebrities, women who don’t go for blonds in real life, even women who don’t go for men in real life.

The point of a fantasy is, of course, that it’s not real life, and most forms of The Crush involve some amalgamation of the “real” Ryan Gosling — a very talented, very pretty actor, who seems thoughtful about his career choices, capable of laughing at himself, and appropriately complex (twisted enough to empathize with the more alarming characters he plays while remaining far enough removed from them that we can tell he’s only acting) — and the invented Ryan Gosling of the Internet meme, an artsy, decidedly bookish man with a devotion to literary and social theory, a sharp critique of capitalism and patriarchy, and a serious weakness for studious ladies. The proliferation of fictional Goslings is in part a function of the Internet’s tendency to perpetuate itself, but it seems to me there’s also a complicated permutation of fantasy happening here, one that makes sense for a generation of women raised to be wary of fantasy, and that makes even more sense in a year that’s been as rough on fantasy as 2011 has been.

It’s worth pausing here to note that with the exception of "The Notebook," which remains the anomaly in his career, Ryan Gosling’s cinematic oeuvre does not exactly scream “romantic kiss in the library stacks.” His best-known roles include a self-loathing Jewish neo-Nazi, an awkwardly styled and  socially challenged man who falls in love with a blow-up doll, and a drug-addicted middle school teacher who is inappropriately dependent on one of his students.

Gosling's 2011 films include "Blue Valentine," a bleak portrait of marriage that could convince the most hopeless of romantics that no matter how adorable and in love you are, your marriage could well end in excruciating disappointment and desolation; "Drive," a stylishly bloody movie in which he plays a getaway driver who’s handy with a knife — convenient if you need to be rescued from murderous criminals, but not exactly ideal boyfriend material — and "The Ides of March," in which he plays an increasingly unscrupulous political operative in a movie that emphasizes the degree to which politics treats young women as disposable.

Even in "Crazy Stupid Love," the popular romantic comedy that made a certain screenshot of Gosling’s abs ubiquitous this year, Gosling doesn’t quite go the traditional leading-man route. "Crazy Stupid Love" tries to be, and sometimes is, smarter than the average romantic comedy. Gosling plays second fiddle to Steve Carell, whose storyline is the real heart of the movie; Gosling’s chemistry with Carell is more interesting than his chemistry with Emma Stone. When Gosling’s character and Stone’s character finally go home together, she calls him out on being a notorious womanizer and demands to know his typical seduction routine. When he confesses that he seduces women by reenacting the lift scene from "Dirty Dancing," and then demonstrates the tactic, Emma Stone is allowed to simultaneously laugh and swoon. She can fall for him because she’s in on the joke. If she didn’t know the dance was a game and declare herself prepared for that, she’d be just another one-night stand who fell for something stupid.

A reader asked me once about a line in a story I wrote. A musician tells his on-again, off-again lover that her problem with relationships is that she allows men to be too honest with her, that she ought to learn to “appreciate the liars,” because when people care enough to lie about themselves it means they care enough to be afraid of losing you. The reader wanted to know if I believed that. When pressed, I admitted that at the time I wrote the story, I believed something like the opposite. I believed that you could either be the woman a man loved or the woman with whom he was honest, but that you could not be both. I believed it was always better to be the latter. I believed in people who wore their flaws on their sleeve, because at least I knew they weren’t fooling me. I could forgive people for hurting me, but I could never forgive anyone, myself included, for making me feel stupid.

But to be in love is often to be a little bit stupid, and it hit me watching the "Dirty Dancing" reenactment scene that part of Gosling’s charm is in being the fantasy man for women who are skeptical of fantasy. We were raised on fairy tales by mothers who were sheepish about letting us watch them. Prince Charming was a nice distraction, but it would be foolish to count on him, we knew that. We were bombarded with the wedding industrial complex on one hand, and divorce statistics on the other. We were supposed to want things that smart people knew they might never have. Even our careers were like this: They told us to be careful, because there were so few good jobs in academia for literature and humanities scholars, so few  jobs in publishing period, so few book contracts, and lately, so few legal jobs that pay back law school loans. Grad school was a calculated investment fantasy, a place you didn’t go without being warned of all the ways it might not work. At every junction there must be a Plan B, because it was fine to desire things, but not to count on them. We have been warned to be smarter than the thing that’s coming next.

Many of us succeeded — we  built a life we wanted, and we enjoy it such that we’d be wary of dismantling it for anyone. It makes sense to me that this is the demographic that has seized on the Ryan Gosling meme. Internet Ryan Gosling is so clearly conjured that knowing he’s not real is part of the point. We can swoon, safely, because we are all in on the joke. We can invent whatever joke fits best in our lives. The Ryan Gosling phenomenon seems in large part a product of the Internet, not just because of the memes that have spread it, but also because fantasy Ryan Gosling is a fantasy for the Internet age, a fantasy that requires us to think about reality and fantasy, about the ways in which we are connected and the ways in which we are disconnected and the ways in which our disconnections are a product of our desires.

This week, the two things I got forwarded the most were Ryan Gosling blogs and the trailer for a documentary about a young woman who lived alone and was dead for three years without anyone knowing she was gone. It struck me that these things were not entirely unrelated, that sometimes, underneath the insistent creation of the fantasy -- the invention of a man who appreciates your work and understands your obsessive focus and your crazy hours and your unwillingness to play dumb or to put yourself second because you are a woman -- there is a desire to be seen, to be valued, to be convinced that you do not need to listen to the voice in your head that insists you call all your friends demanding to know how long it would take for them to notice if you died. The Crush may be about knowing that neither your tedious daily tasks nor your nerdy Oxford-comma fantasies are yours alone.

Of course, it is always possible that I am overthinking this.

Danielle Evans is the author of "Before You Suffocate Your Own Fool Self."