Cities are broke? Unimaginative? Hardly. From coast to coast, these 2012 projects will be transformative 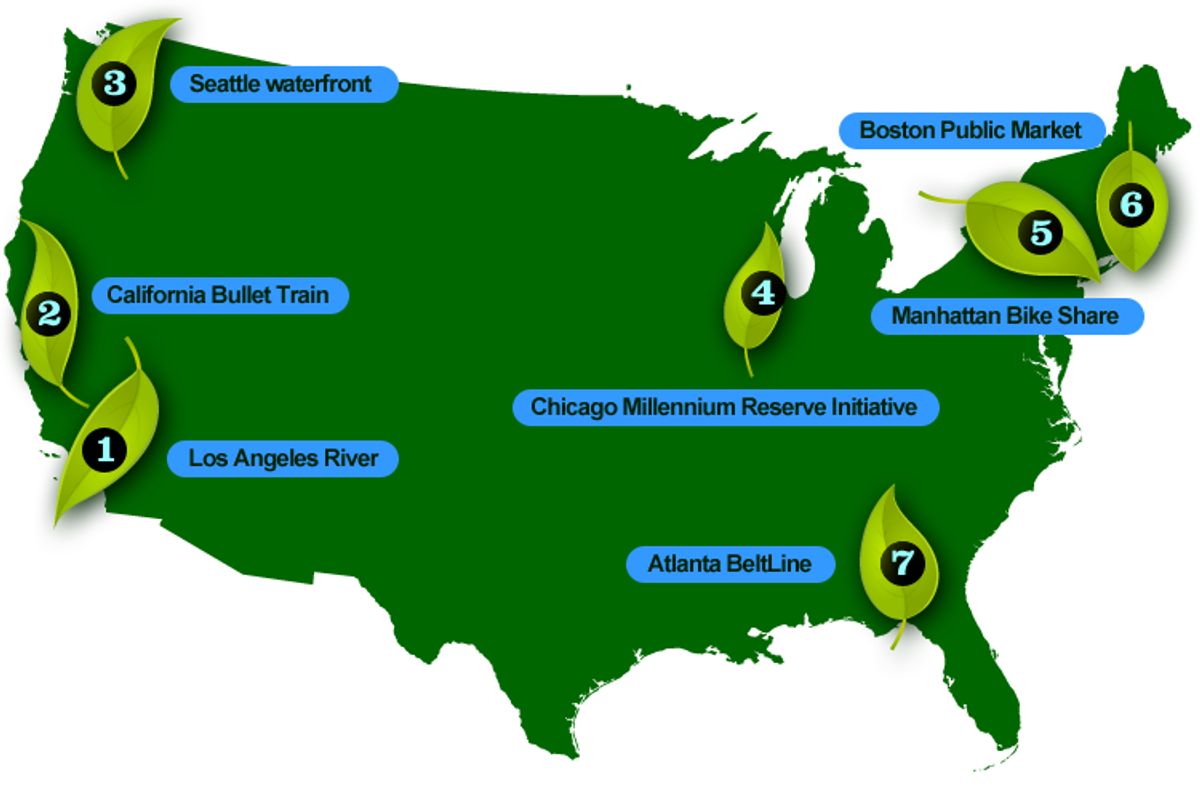 America doesn't do big projects anymore -- we're too broke, no one can agree on our priorities, that era of bold thinking is over.

That canard has been repeated so many times that it's now accepted as gospel. Except it's not true. In cities in every region of the country, pie-in-the-sky ideas are moving from brainstorm to blueprint to groundbreaking -- and 2012 will prove it. From a massive re-imagining of a postindustrial Chicago landscape to the rebirth of the Los Angeles River, these seven ventures point the way to a brave urban future.

There aren't a lot of urban parks that you'd get on a plane to visit, but if Chicago's plan for its Calumet region succeeds, we'll be on the first flight to O'Hare. Calling it ambitious would be like calling the Sears Tower tall. At 140,000 acres, the Millennium Reserve Initiative would be the biggest open-space project in the country, transforming a huge swath of underused, postindustrial land into a playground of wildlife corridors, parks, gardens, organic farms and more than 50 miles of hiking trails. The city is hoping it'll be a boon to tourism and build on Chicago's already well-deserved reputation as a leader in big green urban ideas. The first phase, the Calumet Core, begins in earnest in 2012 with the restoration of 15,000 acres of open space.

New York is making up for being late to the bike-share table by serving itself a portion bigger than any other U.S. city. How big? Ten thousand bicycles at 600 stations clustered throughout Manhattan and northern Brooklyn -- and that's just in the first phase. The system will launch this summer and be run by Alta Bicycle Share, the company that made Boston and Washington, D.C.'s systems a runaway hit. And New Yorkers have every reason to believe theirs will be just as successful: The number of bicyclists and bike lanes has exploded in the past few years. Plus, bike-share systems work best when combined with a great transit system (as a 10-minute walk to the train becomes a two-minute pedal) and New York's is second to none. Transportation commissioner Janette Sadik-Kahn is already a heroine to New York's cycling community -- this should qualify her for sainthood.

When we think of the L.A. River, we think of the liquid cop barreling down a grocery-cart-strewn aqueduct in a busted 18-wheeler. But that may soon change. Seventy years ago, as the city around it grew, the Los Angeles River was lined with concrete to prevent urban flooding. Much of it was completely enclosed, and efforts were even made to build a freeway over it. But the tide appears to be turning -- LA now wants to become the unlikeliest new participant in the nationwide effort to revive urban waterways.

This month, the city council approved a waterfront development plan for the river, and in 2012 the city will lobby the Obama administration to fund a revitalization study. The goal is to remove some of the concrete encasement and increase public access, but local river lovers aren't waiting. This year, the city got permission from the Army Corps of Engineers to allow a limited number of kayakers onto the river, and the 280 available spots (at $50 bucks each) sold out in less than 10 minutes. Councilmember Dennis Zine, whose district the river runs through, is talking about integrating parkways and bike paths into the river's new life as well, creating a comprehensive waterfront alternative to sand and saltwater. "Eventually what we would like is to make it a living river with bike paths, walkways and restaurants," he told the Los Angeles Daily News. "We want businesses facing in to appreciate the river."

The ideal outcome would have been to get rid of the Alaskan Way Viaduct altogether, an underused elevated freeway that cuts the city off from sparkling Puget Sound. Alas, despite the best efforts of activists, Seattle has decided, after a decade of debate, to finally bury the thing at an estimated cost of $3.1 billion. But it's half a victory that should still be celebrated, because by the end of 2012, the 1.7-mile structure will have been demolished, opening up 22 acres of waterfront. And the city is dreaming big about what should go there: "Besides cafes, shops, housing, bike paths and open spaces with views of the water and the Olympic Mountains, ideas under consideration include thermal pools for public bathing and 'poetry poles,'" reported the New York Times. Also, insisted the city planning director: "Beer has got to be right up front."

With farmers' markets booming, the return of public markets seems like a logical leap, and Boston is hoping to bring back the bustling indoor market experience in 2012. In a 26,000-square-foot space astride the linear park created by the Big Dig, local organizers have been working to make the Boston Public Market a reality. In fact, they've been working at it for quite some time. But the city has now pledged $4 million, and proponents of the project are racing to raise the other $6 million they say they'll need to open it in the coming year. If they succeed, they envision something with a similar feel to Philadelphia's lively Reading Station Market (albeit smaller in size) with 100 vendors selling produce, cheeses, pastas, spices, meats and fish. And with the tourist-friendly Haymarket nearby, Boston Public Market hopes to become the epicenter of a larger "market district" that might grow up around it.

Atlanta Puts a Ring on It

We've mentioned the Atlanta BeltLine before, but it bears repeating, if only because we can't think of another urban project more inspiring and forward-thinking. It will take years to complete, but when it's done, a 22-mile "emerald necklace" of parks, transit and new neighborhoods will encircle the city, built along abandoned railroad corridors. In 2012, the  first segment on this corridor will open: the Eastside Trail, a 2.5-mile section that will connect Piedmont Park and the Martin Luther King Jr. district. The BeltLine will give Atlanta some much-needed green space and reconnect neighborhoods long separated by unused dead space.

Maybe we're recklessly optimistic, but we're still excited about the California bullet train. Yes, the funding is in peril. The plans have changed more often than a Rockette on Christmas Eve. And polls show that the public is losing faith in the project. But we are not. Advocates are pushing forward still, and hopefully they'll succeed. The high-speed rail project remains a critical part of the plan to keep California's cities connected in a century that will see the state's population more than double, from 25 million to 60 million. And 2012 will be do-or-die for the train -- supporters want to break ground by the end of the year, and critics want it dead by then. By 2013, we'll know how big American infrastructure can still go.