When a cage means freedom

Two stories -- a real-life tragedy and a feel-good film -- offer a clear lesson for zoos. And maybe even us, too 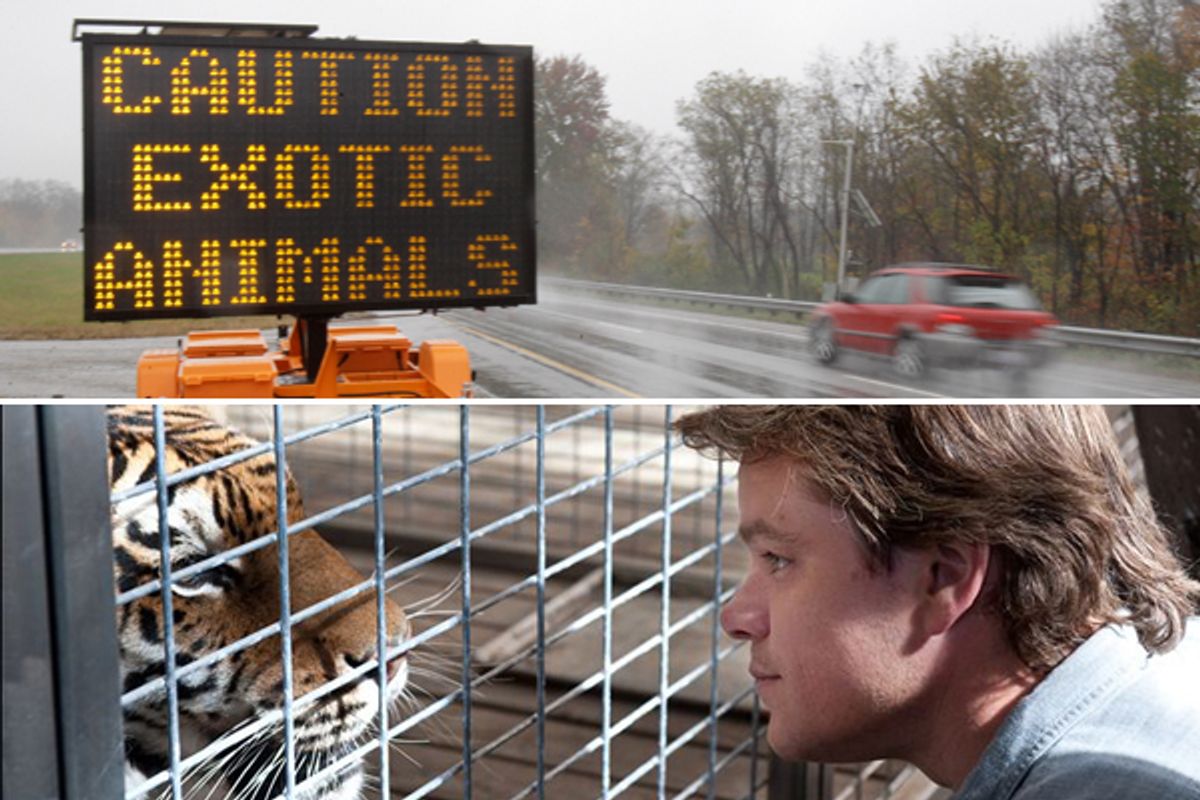 2011 brought two very different zoo stories. The first, a tragedy, takes place in mid-October in Zanesville, Ohio.  Terry Thompson, the owner and keeper of Muskingum County Animal Farm, released 56 animals from their enclosures before killing himself.  It is unclear what he thought would happen to them, but it’s safe to say that Thompson was disturbed, depressed and isolated. He had just spent a year in prison for possession of unregistered guns (and many more were found on the premises after his death), his wife had just left him, and it was reported that he was having serious financial difficulties. He was unable to maintain good relationships with most of his neighbors; some people speculate that releasing the animals was a way of getting back at the people who surrounded him. Others thought he intended the animals to find a new life in the wild. Faced with over 35 big cats and other dangerous animals running loose in their community, though, the sheriff’s office ordered all the animals to be hunted down and killed. The bodies of dead animals lined the road into town.

The second zoo story is a tale of redemption, coming in the form of a big Hollywood holiday release, “We Bought a Zoo.” Directed by Cameron Crowe and loosely based on a book by Benjamin Mee, “We Bought a Zoo” stars Matt Damon and Scarlett Johansson and is a delightful if overly sentimental Christmas film. Mee (Matt Damon) is mourning the death of his wife and losing touch with his kids. On a whim, he decides to change their lives by buying a zoo that is in serious disrepair. Through hard work, borrowed money and lots of struggle, Mee and his friends manage to refurbish the zoo, get a new license and reopen. Along the way, Mee finds emotional healing through his connection with animals.

The two zoo stories are inverse images of each other. The only thing they have in common is that both can make you cry. But I think there’s a lot we can learn from both stories.

We had a hard year in America. Foreclosures, unemployment, homelessness, depression, occupations in cold and wet tents, rubber bullets, pepper spray. We seemed a country turned against itself. This past year felt to some of us like we were on the brink of destruction, and we maybe felt a tinge of the despair Terry Thompson may have experienced as he released his animals into the world, and turned the gun on himself. As a country, we seem fallen, lost.

Animal rights advocates, and even many animal welfarists, decry the keeping of animals in zoos, especially the unregulated, private ones like Thompson’s. And I have to confess that when I see images of animals pacing in cages, mutilating themselves, being gawked at by human observers, or lining the road like they were in Zanesville, part of me agrees. My heart goes out to suffering zoo animals mostly, I think, because I feel fully identified with their precarious place in the world. But there are other truths that beg for consideration. The first is that we are losing our wild animals at a rate nearly a thousand times faster than background natural extinction. Global warming, climate change, deforestation, human development and human overpopulation are putting the lives of all wild animals in grave danger. Wild animals have no more room, no more resources. We humans have taken everything. We have doubled our population in 20 years and are now consuming not twice as much of the earth’s resources as we were in 1990, but 10 times as much.

We should continue to pour resources into conservation, but at the very same time we need to recognize that the vast majority of these efforts are failing. Failing miserably. The harsh reality is that if we cannot find ways of accommodating and controlling wild animals in places like zoos and sanctuaries, we will lose them for good. Extinction really is forever.

The real Benjamin Mee, author of the book “We Bought a Zoo,” knows this; the zoo upon which the Hollywood movie is based is in Britain, and Mee specializes in collecting captive bred endangered animals. Eventually, he says, he would like his zoo to exclusively house the endangered and extinct-in-the-wild animals. He fully understands that reintroduction of these animals is difficult, in most cases probably impossible. But keeping them in this world in conditions where they can flourish is, to my thinking, a laudable goal. Responsible zoos like Mee’s never take animals from the wild, but breed captive animals through international stud books and zoo alliances. These captive animals can’t replace the ones squeezed out of the wild, but they go a very long way in teaching people about other species and the need to conserve whatever we have left.

The second truth in this mix is this: the kind of freedom animal rightists advocate is built on a notion that no longer seems tenable -- for animals or, for that matter, even for humans.  The idea of complete autonomy and self-determination for animals underwrites a worldview where individual freedom trumps everything, even the goals and goods we all ought to be holding together and in common. In the strictest sense of the word, animal rights means that no animal should ever be used for human purposes whatsoever. No meat, no pets, no circuses, no sport, and certainly no zoos. Indeed, one of the major animal rights organizations that works to permanently close down all zoos, even the good ones, is named “Born Free,” a reference to the story of Elsa, a lion cub raised by humans Joy and George Adamson, and immortalized by the 1966 British film of the same name. Even though Elsa dies soon after her release, the moral of the story is that it’s better to be dead than in a cage.

This kind of valorization of autonomy, and the radical individualism that follows from it, misses the fact that it is precisely our enmeshments that make us who we are and give our lives meaning. We are all part of many different systems, economic, environmental, familial, etc., and it is our shifting presence in those systems that makes us visible, that allows us to be known. America may have been built on an ideology that values personal freedom over any and all connections, but that is exactly the ideology that leads us to free-market capitalism, neoliberalism, global domination, and winner-takes-all social Darwinism. In the name of “personal” liberty, corporations (which are now considered “persons”) are granted constitutional power that gives them license to perpetuate economic inequality, and has produced the dominant 1 percent.  The greater good, whether it’s configured in the frame of the “commons,” the environment, the proletariat, or the biomass, is losing ground.  (Many of us, obviously, think it’s time for a different reality.)

There are bad zoos out there; of that there is no question. Animals who are not treated well, lacking the kind of attention that will allow them to thrive. But the final truth worthy of consideration here is that there are really good zoos out there too. They do exist. Places where animals have enough room, good food, an existence where their “freedom” is somewhat curtailed in return for care, connection and belonging. “We Bought a Zoo” portrays one of those places. It is an experiment in learning how to live with and appreciate one another, not through dominance and power, but through attachment and connection.

Terry Thompson was completely alone in the world with his animals; Benjamin Mee had a lot of support from a lot of people who really valued the lives of the animals in their care.  They didn’t always know what they were doing, they made a lot of mistakes, but working together they listened to their animals, built them bigger enclosures, found better food, habitat enrichments, and better ways of caring for them. Most of all they didn’t give up hope -- on each other, their animals, or the world.

That’s not just a useful model for zoos, but possibly for where we we want to go as a country, too. We need to resist the dark impulse to retreat from society -- like the isolated individualism of Terry Thompson -- and instead embrace a different model where interdependence and care are paramount. And we need to extend that circle of care to all animals, and to the planet itself; I do not want to be part of the generation that proclaims the last tiger is gone, or the last grey wolf, or the last polar bear. We really can do better. As Mee, played by Damon, says in the film, “It’s a really great dream. And there are lots of cool animals in it.”

Kathy Rudy is associate professor of Ethics and Women's Studies at Duke University. Her most recent book is "Loving Animals: Toward A New Animal Advocacy," Minnesota University Press, 2011.