In a Salon interview, the director says his music, like his films, finds the moment when the chilling turns comedic 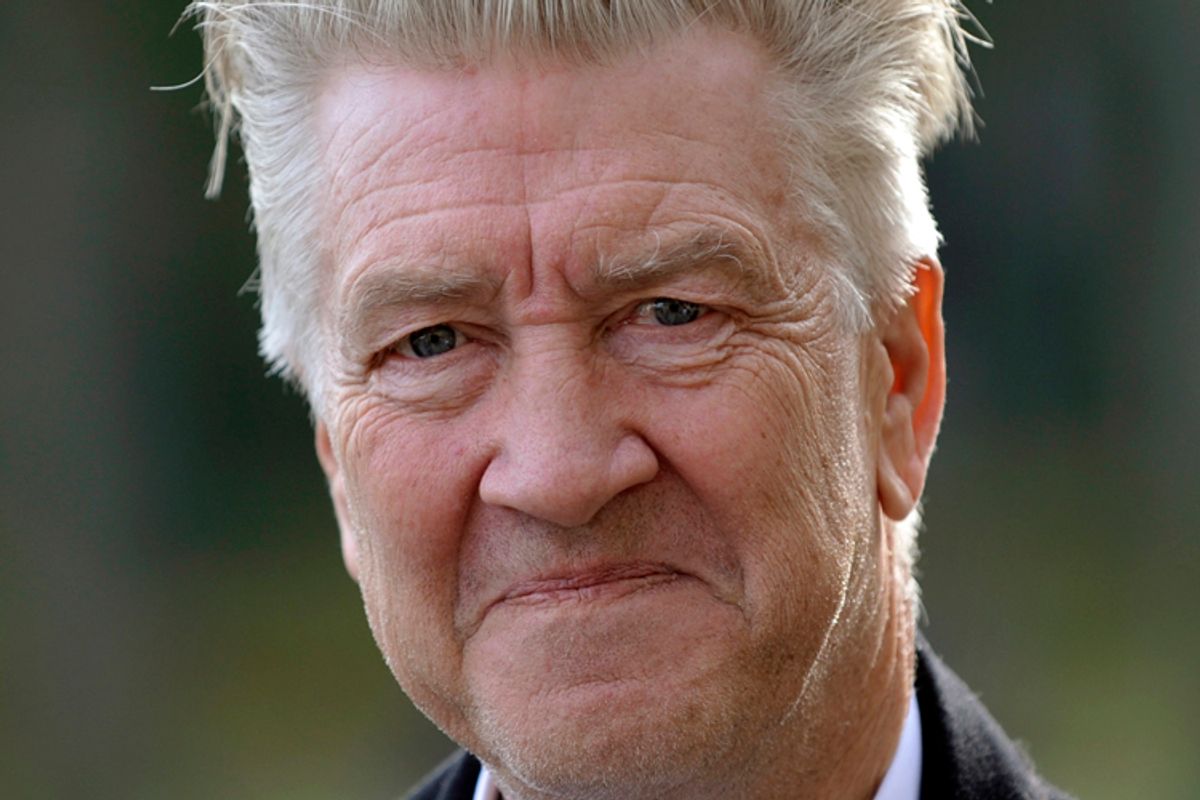 It’s fashionable these days for young musicians to cite David Lynch as an influence, but the director's new album, "Crazy Clown Time," is a stranger, wilder beast than his followers – among them Lana Del Ray, Anna Calvi and Dirty Beaches – have ever released. The album’s songs are fractured narratives torn from fever dreams, where tales of stalking, fear and violence are punctuated by bursts of naive hope. Sometimes the horror is funny and the happiness disquieting – as with just about anything the director (and sculptor and painter and screenwriter and producer) has ever made, it’s never obvious how we should react to the music.

Since his debut feature, "Eraserhead" (1977), Lynch has given his films and other projects sonic worlds that enthrall and unsettle in equal measure. He credits Angelo Badalamenti, composer for "Blue Velvet," "Twin Peaks" and "Mulholland Drive," for steering his sonic experiments toward full-fledged music-making. Lynch has been involved in a number of albums before – as a member of the warped-blues-rock duo BlueBob (whose self-titled album was released in 2001), as producer and songwriter for singer Chrysta Bell’s debut "This Train" (released in September), as a guitarist on Jocelyn’s "Lux Vivens: The Music of Hildegarde von Bingen" (1998), and as a singer on the Danger Mouse/Sparklehorse project "Dark Night of the Soul" (2009). "Crazy Clown Time" brings all of these threads of his career together, as he and collaborator/engineer Dean Hurley offer atmospheric songs that start with the forthright starkness of the blues and veer off, as if on a lost highway. Leadoff track “Pinky’s Dream” is sung by the Yeah Yeah Yeahs’ Karen O, but otherwise it’s Lynch himself who whispers, keens and bellows at the mic, taking on the personae of disparate characters.

Lynch has a reputation for being oblique – perhaps even obfuscatory – in interviews, but in discussing "Crazy Clown Time" over the phone from Los Angeles on a “really beautiful” afternoon, he sounds enthused. He’s more relaxed than he is on camera, sometimes casting about unself-consciously for the right word. Lynch’s last feature film was "Inland Empire" (2006), and though questions about new original projects tend to elicit vague responses, he will admit he looks at his script from "Ronnie Rocket" (an unproduced ‘50s-inspired science fiction film) “from time to time … there’s always something I haven’t figured out yet. I want to make it; I love that world.” He has confirmed he’s working on a documentary on Maharishi Mahesh Yogi; it seems apt to begin our conversation with a nod to his devotion to transcendental meditation.

You’ve said the tracks on "Crazy Clown Time" gestated in jams with Dean Hurley. Considering you’ve spoken about using transcendental meditation to “catch ideas” at deep levels for your films, did you also use it for the genesis of some of the tracks?

Well, you don’t use transcendental meditation to catch ideas necessarily; you use it to expand whatever consciousness you have to begin with. When you expand and you have more consciousness, you can catch ideas easier and easier, and when you get on a thing, the ideas flow more freely. … It brings so much happiness too. This consciousness is also bliss, and so you get happier in the doing of things. I don’t know what it would be like without it, ‘cause I’ve been doing it for 38 years. On a jam, if Dean has got a certain beat going on the drums, and I’ve got a certain sound on the guitar, and we start going, and there’s a certain chord pattern, I know every musician knows this – it just causes you to go a certain way. In following it, something you feel is thrilling and new can come from jamming.

You’ve used the sound of the tremolo guitar often in your work, going back to the days of "Twin Peaks," for instance. What is it about its sound that attracts you so much?

It probably started in the ‘50s. When the electric guitar was born, an instrument “beyond the beyond” was born. It is such a thrilling sound, and it’s sort of magical. When you’ve got one in your hands – I don’t play, really, but I play it more like a sound effect – it’s like a gasoline-powered, V8, rough-running, incredible engine, and it’s just rough, beautiful power. … I think there’s a magic in a pure tone sliding off-tone, sliding back, and two things beating against each other, trying to get harmonized. There’s some kind of great beauty in the tension, and a little bit of beauty in off-tune, bad music.

On “Pinky’s Dream,” when Karen O sings, “Are you laughing, or are you crying?,” she’s asking about two very different displays of emotion, which seem related here.

Yeah, there’s a Vedic expression, “The world is as you are.” So two people could hear the same song, and one says, “This is a sad song,” and the other says, “No, that’s really, really happy.” And there’s something about a lot of ‘50s music that had those two things, depending on the [listener] – it kinda held both, would work for both moods.

Is that kind of complexity something that interests you in general? It seems some filmmakers or songwriters seem to want to evoke one emotion at a time, but with you, there are more layers.

That makes sense. When you get something that’s thrilling, if it’s working on a couple of different levels, it’s more thrilling. How you get there is not an intellectual thing. You stumble on it, really.

Going back to the question in “Pinky’s Dream,” do you sometimes laugh at things that other people would find disturbing?

Oh yeah. But I’m not maybe the only one. In Frank Booth [the nightmarish villain played by Dennis Hopper], in "Blue Velvet," I saw so much humor, and many times, I would have to cover my face, in his most brutal scenes. I think it had to do with a person that’s so obsessed that the obsession can sometimes, if you look at it at the right angle, be humorous. The person could kill you, but at the same time, there’s some humor swimming in it.

Would that translate into a song like “Speed Roadster” on "Crazy Clown Time"? It’s about a stalker, which is ominous, but it seems kind of funny as well.

Exactly. “Speed Roadster” is a song [where] a kind of character was born, and this character is not unlike a lot of us. It’s a subject that’s so tormenting to so many women, and it’s not funny, but at the same time, this kind of thing is driven not by love; it’s lack of love that will drive a man absolutely to do sometimes terrible and strange things. … Dean and I had the track, and I listened to it for a couple of hours, over and over, and the lyrics came out of the music.

The “making-of” video for the Chrysta Bell album you just produced shows some interesting objects in your studio: a melodica, an old phonograph, DVDs of your movies. Are there things that you like to keep around for inspiration?

Not really. Dean is a big collector of many musical instruments and gizmos, but I just like the studio because it’s very soundproof, and it’s a safe, kind of comfortable area. It’s a place where you can experiment.

Is being in a “safe, comfortable” place important for you? I understand you don’t like to sing in front of people.

[laughs] No, I sure don’t! And yeah, it’s super-important. I’m really only ever singing in front of Dean, and he’s not looking at me, and he puts a lot of the stuff [effects] on my voice, so I feel it’s almost like somebody else is singing, and it helps me a lot. If Dean puts certain stuff on the voice, and the music is a certain way, a character can be born.

Did the song “Strange and Unproductive Thinking” [the album’s longest track, featuring a monologue that veers from the evolution of humanity to cutting wood to dental hygiene] arise from something you wrote separately?

I sometimes write these things I call “meaningless conversations”; they’re just long, no-punctuation things, and when the whole [conversation] is read, they might have a certain kind of feeling to come, or a world, but they’re just really meaningless. I tried to do it through a Peter Frampton tube, but it didn’t really work, so then Dean found another way for me to do it, and it sounded pretty much the same as your mental image of the tube.

There’s quite a sense of space in your music – you don’t use very many layers or elements at once. Is this something you’re going for specifically, and what attracts you to that kind of sound?

That’s a real good question. I like this girl Lissie. When I hear her and her two band members – the lead guitarist and the bass player [who] plays drums at the same time – it’s incredible. When it’s minimal, they’re so good. Lissie’s got this way of singing, and the melodies are so good, but it’s pure. It’s like there’s no tricks. And then I feel like her album is over-produced: it’s not that pure way, and I wonder why, ‘cause it can weaken something. We really like the old blues men and women, and the way they went real pure, and it was the starting point to this album. It took off in weird directions. It goes through Pro Tools, and there’s lots of stuff we can do to it later so it’s not so pure, in that way, but there’s not a lot of lines going together; it’s kind of minimal.

It’s pure and complex at the same time.