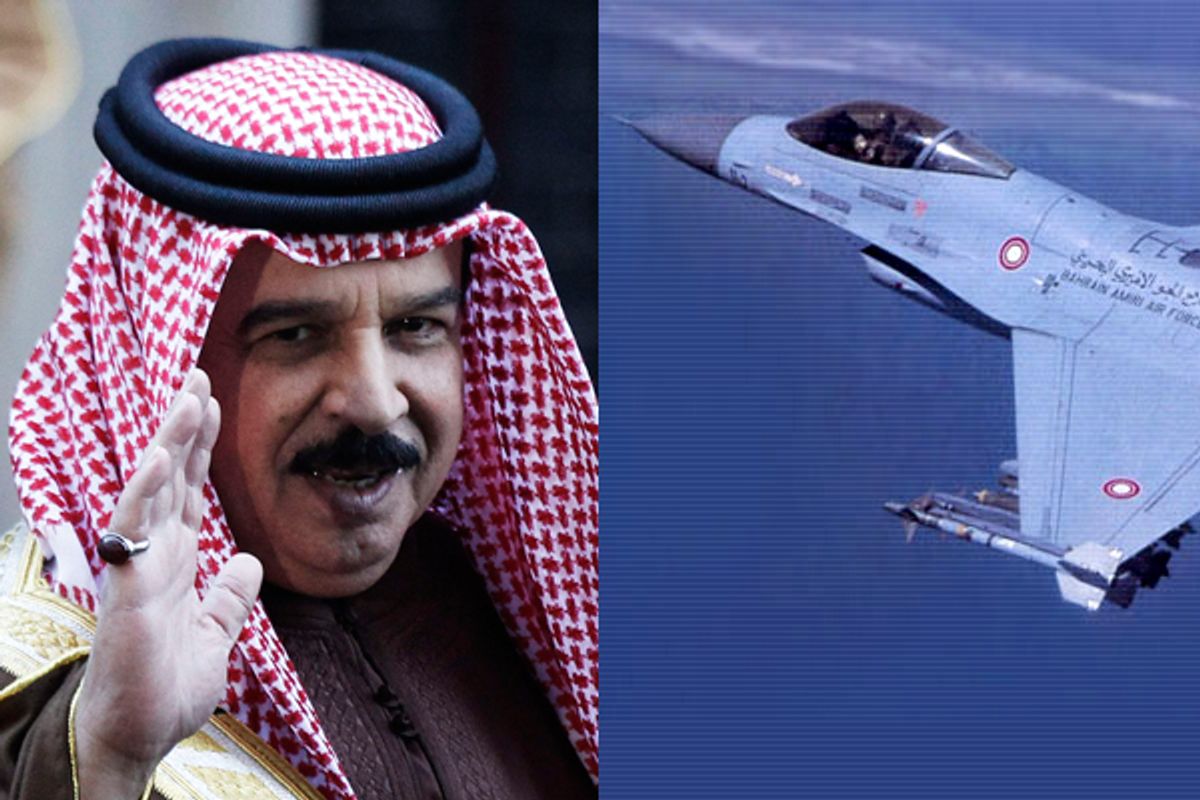 A top executive at Lockheed Martin recently worked with lobbyists for Bahrain to place an Op-Ed defending the nation's embattled regime in the Washington Times -- but the newspaper did not reveal the role of the regime's lobbyists to its readers. Hence they did not know that the pro-Bahrain opinion column they were reading was published at the behest of ... Bahrain, an oil-rich kingdom of 1.2 million people that has been rocked by popular protests since early 2011.

The episode is a glimpse into the usually hidden world of how Washington's Op-Ed pages, which are prized real estate for those with interests before the U.S. government, are shaped. It also shows how Lockheed gave an assist to a major client -- Bahrain has bought hundreds of millions of dollars of weapons from the company over the years – as it faces widespread criticism for human rights abuses against pro-democracy protesters.

As Ken Silverstein reported in Salon last month, the kingdom is stepping up its Washington lobbying efforts. Here's the latest example, as far as I can piece together from lobbying disclosures filed by Bahrain's "strategic communications" firm, D.C.-based Sanitas International.

On Nov. 30, the Washington Times published an Op-Ed under the headline "Bahrain, a vital U.S. ally: Backing protesters would betray a friend and harm American security." It was written by Vice Adm. Charles Moore (retired). Moore was formerly commander of the Navy's Bahrain-based Fifth Fleet. From 1998 to 2002, Moore notes in his Op-Ed, he "had the opportunity to develop a personal relationship with His Majesty King Hamad bin Isa Al Khalifa, Bahrain’s leader, as well as many senior officials in his government." Moore passed through the revolving door and is now regional president for Lockheed Martin for the Middle East and Africa.

Moore argues in the Op-Ed that while protesters in Bahrain have "legitimate grievances,"  the U.S. "needs Bahrain now more than ever to preserve regional peace and stability in what remains a dangerous and uncertain world." He particularly focuses on using the large U.S. Navy presence in Bahrain as a counter to Iran, which Washington sees as a foe and which Bahrain claims is fomenting unrest among the country's Shia majority.

The context for all of this is continuing protests in Bahrain against the Sunni ruling family. The regime has used "systematic" torture against its opponents over the past year, a human rights report found in November. And while the government has promised reform, violent suppression of protests has continued. The Obama administration has supported the regime through the crisis, though there has been some grumbling in Congress about a pending arms deal that would send more American weapons to Bahrain.

Bahrain, in response, has launched a major lobbying push to shore up its support in Washington. It hired former Howard-Dean-for-president campaign manager Joe Trippi and Sanitas International to "protect the Kingdom and their leadership from the constantly evolving media landscape and 3rd party attacks," according to lobbying disclosures. Sanitas is paid $15,000 per month, plus expenses.

Which brings us back to that Washington Times Op-Ed by Lockheed Martin's Moore. The column was placed in the Times by Sanitas, according to disclosure filings:

(Mastio is an editor at the Times and Fryer is a staffer at Sanitas.)

Sanitas is a registered foreign agent for the government of Bahrain, but readers were not informed of the firm’s role, so they were left with the false impression they were getting an independent opinion from a retired Navy vice admiral.

Moore’s Op-Ed was subsequently promoted on Twitter by a top official at Bahrain’s embassy in Washington and picked up by Bahrain’s government news agency.

To sum up: Bahrain paid a Washington lobbying firm to get an independent-seeming Op-Ed published in an American newspaper and then touted the Op-Ed in its official news agency.

Lockheed Martin did not respond to an inquiry about the nature of Moore's relationship with Sanitas.

In the past decade or so, Lockheed has done hundreds of millions of dollars of business with Bahrain, including selling the nation 10 F-16 jets, hundreds of extended-range rockets, tactical surface-to-surface missiles, and a ballistic missile defense radar system. The company has also had an $87 million contract to do tech support for the U.S. military in Bahrain and elsewhere. So it's clearly in Lockheed's interest to keep the U.S.-Bahrain relationship healthy, and the company appears to be working directly with the regime to accomplish that goal.

Lockheed spokeswoman Jennifer Whitlow told Salon in a statement that Moore's views are his own:

As stated in the opinion piece, the views expressed by Mr. Moore are his own as an individual, not as a representative of Lockheed Martin, and are based on his experience as former U.S. Navy 5th Fleet Commander.

In fact, the piece does not state that Moore's views are "his own as an individual"; he is identified as a Lockheed executive in his bio line.

As commander of the U.S. 5th Fleet from 1998 to 2002, Admiral Moore holds a unique and valuable perspective of Bahrain’s historical role as the leading progressive force in the region and its prospects for continued reform. Through his relationship with the Kingdom of Bahrain, we assisted with the placement of Moore’s op-ed, which he wrote personally because of his knowledge of the region and his long standing relationship with the Kingdom of Bahrain and its leadership.”

David Mastio, deputy editorial page editor at the Washington Times, said in an email that the disclosures in the piece were adequate:

I don't know further details on the relationship between the author and the PR firm [Sanitas].

When I published the piece, I was focused on making sure the author's relationship to the subject was disclosed. The piece mentions the author's personal ties to members of Bahrain's government and his bio line mentions his Bahrain-related position with the U.S. government as well as his current employment with a major defense contractor.

I am satisfied that readers were informed of the author's connections.