A humiliating finish is enough to force her out of the race, but maybe not Rick Perry 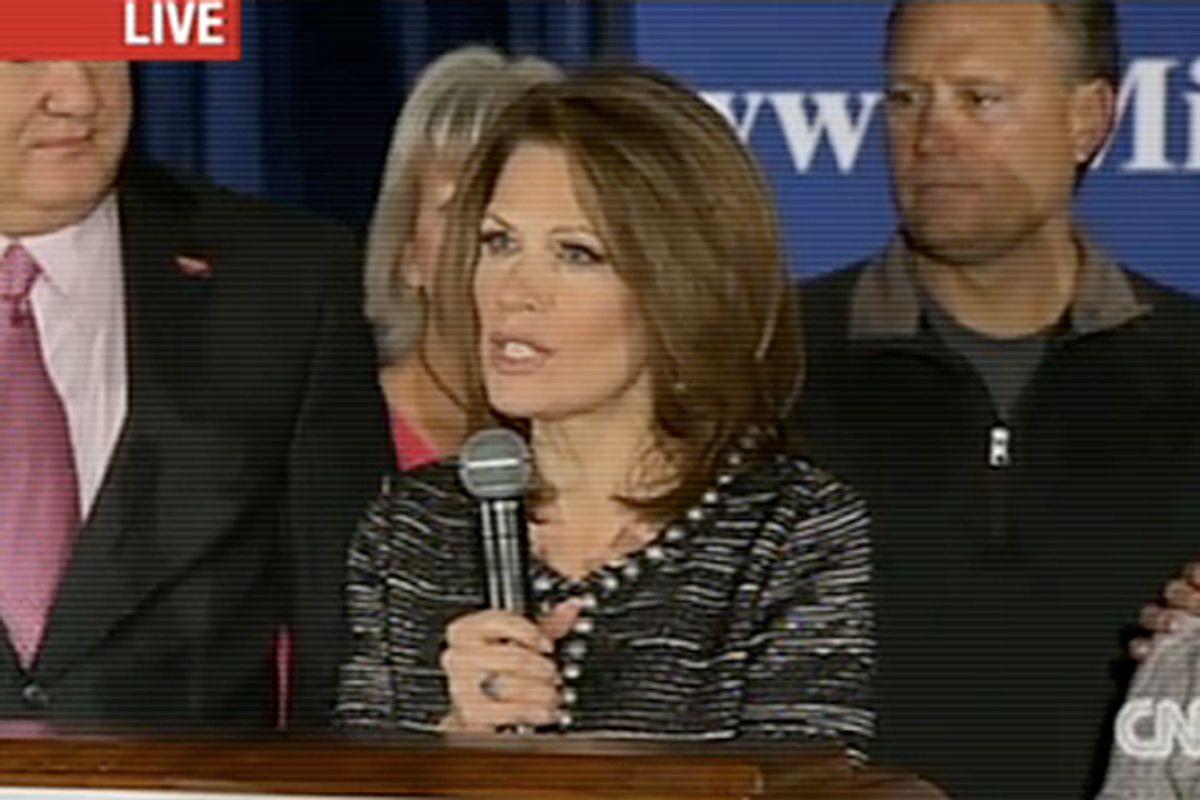 Michele Bachmann is calling it quits. The Minnesota congresswoman, who finished dead last among those who contested the state with 5 percent of the vote, made her departure official at a late morning press conference in Des Moines.

"Last night, the people of Iowa spoke with a very clear voice, and so I have decided to stand aside," she said.

She didn't endorse any of the other candidates, but her exit is clearly good news for Rick Santorum, who effectively battled Mitt Romney to a first-place tie in Iowa. Santorum's chances of winning the nomination depend on consolidating as much of the party's conservative base as possible and making a stand in South Carolina, which will vote on Jan. 21. (Because expectations in New Hampshire are so high for Romney and so low for Santorum, it's unlikely that the Granite State will settle the major questions that define the GOP contest.)

But just as Bachmann finished speaking, Santorum's quest to unite the right took a hit, when Rick Perry -- who announced in his concession speech last night that he was heading back to Texas to reassess his presidential bid -- tweeted that he was moving on to South Carolina after all. While Perry netted just 10 percent in Iowa and has seemingly no chance of winning the nomination, his presence in the Palmetto State could split up the anti-Romney right, giving the former Massachusetts governor a possible path to what would be a momentous victory.

However, there is now confusion over whether that Perry tweet was supposed to be sent out. His spokesman told Politico that Perry's declaration was news to him, raising the possibility that the tweet had been scheduled to go out before last night's results came in. NBC News, though, is saying that it has confirmed that Perry is staying in the race and heading to South Carolina.

If Perry does press on, the example of 2008, when John McCain used a narrow South Carolina victory to cement his standing as the GOP front-runner, will loom large. Like Romney, McCain faced profound resistance among Republicans in the state, where his 2000 bid against George W. Bush had crumbled apart. But he benefited from the lingering presence of Fred Thompson, whose post-Iowa prospects were as dim as Perry's now are but who used his remaining money in a desperate effort to make a stand in South Carolina. The 16 percent that Thompson ended up netting likely deprived Mike Huckabee of conservative support he otherwise would have enjoyed, and Huckabee lost to McCain by 3 points.

The South Carolina and Iowa Republican universes are fairly similar, with evangelical Christians accounting for about 60 percent of each state's presidential primary season electorate. Entrance polling data last night showed Santorum winning 32 percent of Iowa's GOP evangelicals, with Romney at just 14 percent. Bachmann received 6 percent, Perry nabbed 14, and Newt Gingrich -- who is staying in the race and vowing to target Romney aggressively -- got 14 percent. The more Santorum can gobble up the evangelical support that those three now enjoy, the better his odds in South Carolina will be.